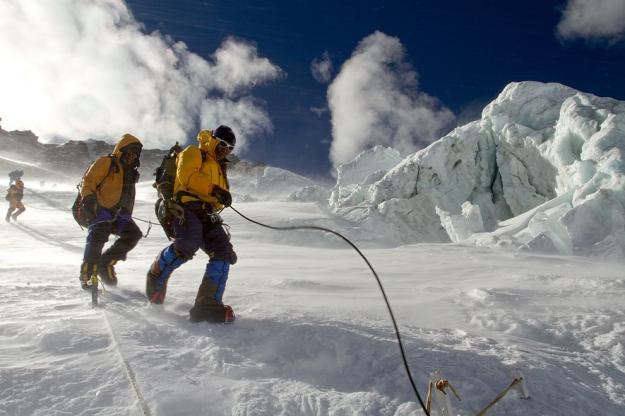 The most recent update from the Nepal Mountaineering Association website contains a statement released by the Ministry of Culture, Tourism and Civil Aviation after a high official level visit to Everest Base Camp led by Hon’ble Minister on 24 April 2014.

The full text can be found here.
Photographs from the funeral procession held in Kathmandu on 21 April 2014 can be found here.
23 April 2014
Ang Tshering Sherpa, president of the Nepal Mountaineering Association wrote an open letter today which was published in the association website. In the letter, he gives an update on the various efforts being undertaken in the aftermath of the Everest tragedy on a number of fronts.
In the letter, he writes:

I would like confirm that we have not received any confirmation regarding the abandon of the expeditions on Everest. Whatever the news disseminated in the media about the abandon of the expedition is false and does not any hold any sense. Yes, Nepalese mountaineers are in deep sorrow after the huge human loss and they are trying to cope with the situation. They are trying to be mentally prepared for the expedition and it will take some time to return in the normal situation.

The letter goes on to deal with issues such as demands raised by climbers and a welfare program coordinated by the Nepal Mountaineering Association, a UIAA member federation, on behalf of the Nepal government.
The official list of dead and missing Sherpas contains the following names:

Name, Address of the Dead, Missing Mountaineer in the Everest Avalanche

Ed Douglas who is in Nepal writes in the Guardian the day after the avalanche on Everest which includes a map of where tragedy struck:

Chechhee Sherpa was cooking dinner when her husband called from Everest. Just 23, Abiral Rai was working for the first time on the mountain,  carrying loads for his New Zealand client in preparation for an attempt on the summit in May. He told Chechhee that he would be up at 2am on Friday to climb from Base Camp through the notorious Icefall to Camp 2 in the Western Cwm, the last major staging post before a summit attempt.

Awful news has come out of Nepal today as we begin to get details about the deaths of at least 13 Nepalese Sherpa guides who were killed after an avalanche on the slopes of Mount Everest.
UIAA president Frits Vrijlandt said the UIAA family which includes the Nepal Mountaineering Association (NMA) mourns the death of the Sherpas who work on Everest under often dangerous and crowded circumstances to prepare routes for commercial expeditions.
“Every day during the climbing season, the Nepalese Sherpa guides put their lives on the line so that others can reach the top of the world’s highest mountain,” said Vrijlandt. “The death of these brave climbers touches us deeply and now their families have lost a father, a brother and a source of income.”

The Sherpa guides had climbed up the slope early in the morning to fix ropes for climbers and prepare the route for mountaineers when the avalanche hit, officials are quoted as saying by the Associated Press news agency.

This accident comes during the peak climbing months of April and May as hundreds of climbers converged at base camp in the hope of scaling the summit.

An official from the mountaineering division at the Nepalese tourism ministry said 13 bodies had so far been recovered and ferried to base camp, while a further three injured climbers were being taken to Kathmandu. As many as seven climbers are still thought to be missing.