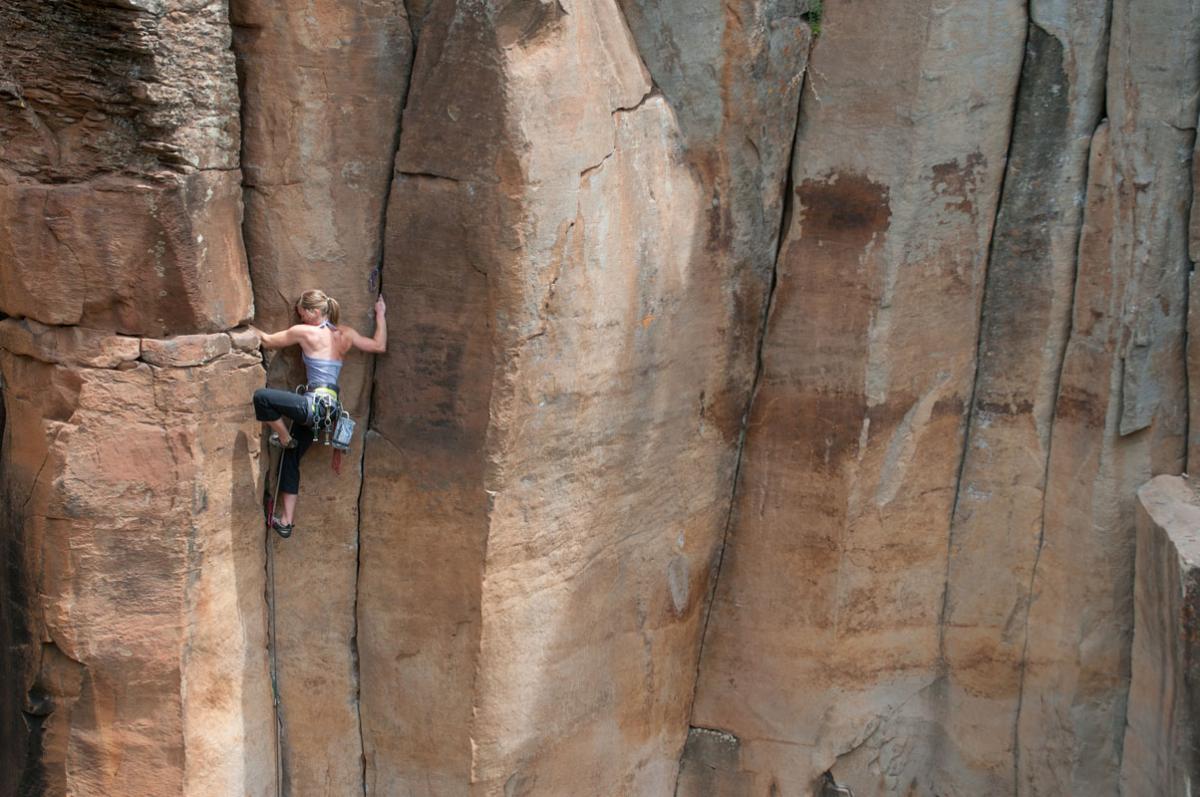 Climbing at the Forks near Flagstaff (Photo: http://flagstaffclimbing.com/)

Editor’s Note: We’ve added a Q & A about climbing in the Flagstaff area with Jason Henrie to this article. Thanks for the tips and be sure to check out their climbing wall or use their services if you are in the area.

The 2014 UIAA – International Climbing and Mountaineering Federation General Assembly takes place in Flagstaff, Arizona, the gateway to the Grand Canyon.

To mark the occasion, we’ve posted some information about climbing in the Flagstaff area. This year, our General Assembly is being kindly hosted by our UIAA Honorary Member
William Lowell Putnam and the American Alpine Club.

UIAA Mountain Protection Commission president Linda McMillan says any UIAA attendees visiting the outdoors in the Flagstaff Area should use common sense and watch out for poisonous snakes, which often stay in shady cracks or under rocks.

Jason Henrie with Flagstaff Climbing was nice enough to answer a few questions about climbing in the Flagstaff area:

UIAA: Can you climb in the Grand Canyon and if so where?

Jason Henrie: Yes, there is a tremendous amount of climbing in Grand Canyon. Climbing exists throughout the canyon from the rimrock to the many buttes and spires. Most of the summits involve long, complicated approaches giving more of a mountaineering feel to the climbing. However, along the rim, there are a few areas of less committing limestone and sandstone cragging.

UIAA: If somebody came into Flagstaff for three or four days and wanted to go climbing, where would you suggest they go and why?

Jason Henrie: Flagstaff has a wide variety of rock and climbing styles. The well rounded climbing trip would involve a day of sport climbing at The Pit or on one of many crags on Mt. Elden. Then a day of basalt trad climbing at either the Overlook or Paradise Forks. Followed by a day of  bouldering at The Draw or Kelly Canyon. Fit a rest day in there with some mountain biking or hiking on the San Francisco Peaks and you would  be in for a fantastic trip.

UIAA: Can you describe the climbing scene in Flagstaff?

Jason Henrie: The climbing scene in Flagstaff is AWESOME! We have a huge body of climbers at all levels. What makes Flagstaff’s scene unique, is how tight knit the community is. We also have a lot of unknown world class climbers in town. These folks are focused on climbing the best they can and don’t worry about sponsorship and fame.

UIAA: Which is the most famous climbing area around Flagstaff and how did it get its reputation?

Jason Henrie: One of the most famous areas is Paradise Forks. It is a columnar basalt trad climbing area that is located at the head of the Sycamore Canyon Wilderness. The routes are steep and unrelenting and rappelling into the canyon makes for a very committing endeavor anytime you want to climb there. Perfect rock and ‘skin friendly’ cracks make this place a must for the visiting trad climber.

UIAA: Can you tell us a few things about some of the most famous and  difficult routes in the area? Length, difficulty etc.

Jason Henrie: There would be too much to list here. Flagstaff area climbing has single pitch crags to 900ft routes in areas like Sedona. Also, phenomenal bouldering on many different rock types. Grades go from easy to 5.14. Best thing to do, is to talk to locals about the classics at each area.

UIAA: How would you characterize the climbing in and around Flagstaff
when it comes to difficulty, style and type of rock?

Jason Henrie: There are many types of rock in the Flagstaff area. This creates endless options for climbing styles and difficulty. Local climbers are well rounded climbers versed in a variety of rock types and styles.

UIAA: What kind of services does your company offer to visitors who want to go climbing?

Jason Henrie: Flagstaff Climbing offers day trips to many of the local climbing areas. Our guides are highly experienced climbers that are prepared to help anyone get out and experience our local climbing. We offer trips for total beginners all the way up to visiting climbers simply looking for a belay. We also teach many classes from basic sport climbing skills all the way to improvised self rescue skills.

As Henrie noted, the most popular of the climbing routes are Paradise Forks and Granite Mountain:

Forks: Paradise Forks is a beautiful columnar basalt climbing area located about a half-hour west of Flagstaff. The area is in Sycamore Canyon at a point where the canyon is actually a Y-shaped confluence of drainages. There are two seasonal waterfalls and pools at the ends of the Y, and the point where the Y merges is the popular “Prow” area. The Prow, The Gold Wall, and the Davidson Wall offer the longest routes which are up to about 90′.

One distinguishing characteristic of the area is that almost all routes are approached from above by fixing a line and rapping in. Also, there are exactly zero sport climbs at The Forks and just a handful of bolts (I can only think of 7: two sets of anchors in the choss at the White Wall, and the three on Australians At The Forks). The area really lends itself to trad climbing up beautiful, varied crack systems. Rock is bullet-hard, pro is typically bombproof, and friction varies from polished to grippy. Expect stout ratings.

If trees are used for an all day rap line, please pad the tree, and then place a piece of gear near the edge of the cliff to take the full load of the rappel, leaving just enough slack in the line so the tree is never directly loaded. This way you don’t have to have a full bombproof trad anchor, just a piece or two and the tree simply offers you an ultimate back up, without being affected.

Nestled in a pine forest, the area is quiet, peaceful, and fairly pristine; please try to keep it that way.

Granite Mountain offers outstanding crack climbs, but there are several great face routes that you should not miss. Ranging in height from 100 to 500 feet, and almost half a mile wide, this south facing granite wall will keep climbers occupied with an amazing variety of difficulty, technique and protection. Most of the routes are multi-pitch trad climbs, but there are a few bolted routes on the left and right end of the cliff.

Situated at an elevation almost 7,000 feet above sea level, the summers are usually mild, and the winters moderate. This gives you a chance to climb here almost year round, but Spring (see access restrictions) and fall tend to have the most stable and enjoyable weather. Always bring water, as the nearest source is at least two miles from the cliff (your car). Access restrictions – early Feb to mid July for peregrine nesting. Contact Prescott National Forest for more information(928) 443-8000 Granite Mountain Outfitters (928) 776-4949 has gear and guides.

More good information about climbing in the Flagstaff area comes from Flagstaff Climbingwhich is authorized to guide and instruct commercially by the U.S. Forest Service and National Park Service.
Their website notes the following best locations:
The Pits  is Northern Arizona’s premier limestone sport climbing area, located only 10 minutes from downtown Flagstaff. The cliff is mostly south facing allowing for plenty of climbing all year. The nature of the rock is generally steep and riddled with pockets with routes ranging from 5.6 to 5.13. Beautiful scenery and great climbing make this an excellent destination no matter what ability level you are.

Jacks Canyon is a limestone sport climbing area located about 1.5 hrs east of Flagstaff near Winslow. The setting is a beautiful limestone canyon with climbing all year. During the winter, we chase sun to stay warm and during the summer we chase shade to stay cool. There are hundreds of routes to choose from on clean, highly textured limestone.

West Elden is one of Flagstaff’s oldest climbing areas. This is predominantly a trad climbing area which has helped to preserve it’s clean and wild feel. West Elden is located at almost 8000 feet so climbing there is a great way to escape the heat during the summer. The rock is called Dacite, which is volcanic and climbs much like a highly textured granite.

Joshua Tree National Park is a world famous climbing area located in Southern California. With over 5,000 routes of all difficulty levels and mild winter weather, Joshua Tree is one of the greatest fall, winter and spring destinations in the world. Wild domes of course granite and a landscape straight out of a Dr. Suess book make this area a ‘must visit’ for any climber no matter what their experience level is.

Other climbing resources for the Flagstaff area include: