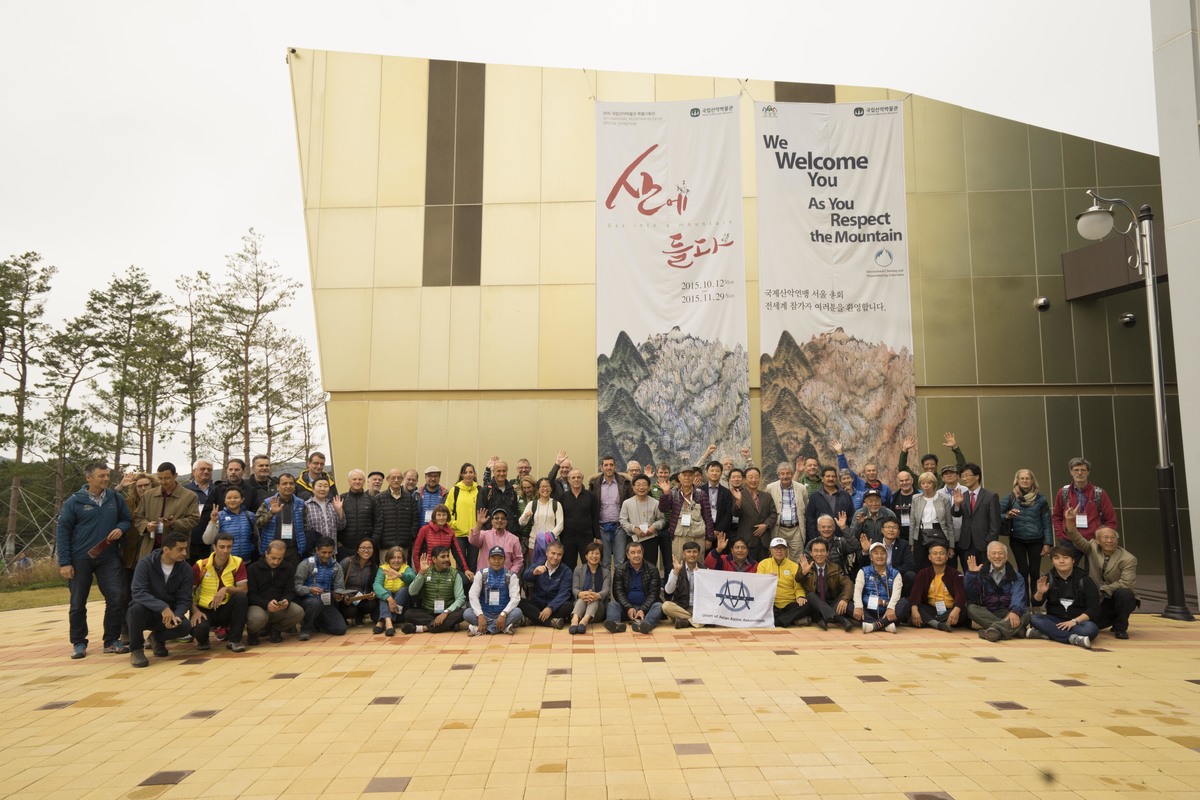 (Seoul, South Korea – 23 October)
The UIAA confirms changes to its Statute – the updated version will be available soon; announces a partnership with the International Skyrunning Federation (ISF); presents details of its – and the Nepal Mountaineering Association’s – support to the WFP programme; while KTK-BELT Studio is presented with the Mountain Protection Award for 2015 and Climate Change agreement ratified.
2015 UIAA General Assembly, Seoul (South Korea)

A gathering of UIAA officials, member federations and delegates met for the annual UIAA General Assembly, hosted this year by the Korean Alpine Federation (KAF) in Seoul.

The UIAA announced its partnership with the International Skyrunning Federation (ISF) which signals the arrival of the ISF as the first sport federation to become a unit member of the UIAA.

The ISF – based in Biella, Italy – was founded in 1995 to promote, govern and administer the sport of skyrunning and similar multisport activities. Skyrunning is defined as mountain running above an altitude of 2,000m where the climbing difficulty does not exceed grade II and where the incline is over 30%. The ISF undertakes its responsibilities for the sport of skyrunning with respect for the environment, promotes private and public sport events, develops training schools and fosters the medical and physical welfare of competitors. An integral part of its international calendar is the Skyrunner® World Series & Continental Championships, held across five continents.

The ISF will continue to administer the sport of skyrunning, competitions and events as an independent international federation with its own legal entity. Together, the UIAA and the ISF will jointly promote the integration of mountain sport associations under one roof.

In becoming a unit member association of the UIAA, the ISF will acknowledge the values of the UIAA and will work with the UIAA to promote the growth and protection of mountaineering and climbing worldwide.

Both organizations will work with the goal to improve their respective positions in the international sporting environment, in order to become stronger and achieve greater opportunities through the union of common interests. The partnership will officially commence on 1 January 2016.

The UIAA presented details of its involvement in supporting the World Food Programme (WFP) and Nepal Mountaineering Association’s response in Nepal.

Following the April earthquake that shook Nepal and left thousands of people stranded in remote locations beyond the access of roads and helicopters, the World Food Programme (WFP) set up a Remote Access Operation to reach survivors with life-saving food, medicine and shelter.

In the Himalayas, a land of expedition, this special operation employs more than 15,000 Nepalese people who are assessing villages and remote communities, clearing access trails and conducting mule and porter convoys to bring food and relief items to those in greatest need.

In addition to opening access for humanitarian relief, this operation provides employment for people who would otherwise be unemployed because of the recent drop in tourism in the region. More than 100,000 people are benefiting from this operation from improved trail access and or delivery of humanitarian relief items thanks to the alliance formed between WFP and the Nepal Mountaineering Association (a member of the UIAA and implementing partner of WFP) and the Trekking Association of Nepal.

Subject to funding, the porters will continue with their work of supporting communities in need, particularly those whose crops have failed and who are considered to be at risk of food insecurity. WFP is grateful for the support of UIAA and its members to enable this unique operation to bring vital supplies to the mountain people of Nepal’s Himalaya.

The full story – and details on how to donate – are available here.

Ahead of December’s United Nations Conference on Climate Change in Paris (COP21) the following declaration on climate change proposed by the Club Alpino Italiano (CAI) and the Nepal Mountaineering Association (NMA) was approved. The document expresses concern about the negative effects of climate change on all the resources of the earth in general and those of the mountain areas and their communities in particular. It is in the mountainous areas that these effects are most obvious.
The declaration can be viewed in full here

Created in 2013 as a response to forest loss, habitat decrease and a drop in biodiversity, KTK-BELT is a platform for farmers, teachers, designers and environmentalists working together to build community-based biodiversity conservation strategies in the eastern region of Nepal.

KTK-BELT was chosen from an impressive list of 22 inspirational candidates, receiving the MPA, sponsored by Western University and Golden Rock, during the UIAA General Assembly.

“We are honoured to be recognized amongst so many important mountain conservation projects from around the world. We see the Award as recognition of both the critical importance of conserving species and habitat in the eastern Himalayas, as well as recognition of the determination, creativity and drive of local leaders, especially Kumar Bishwakarma of Yangshila Nepal, who is really our inspiration on this project,” explained KTK-BELT co-founders Rajeev K Goyal and Priyanka Bista. “The threats to biodiversity in eastern Nepal which include deforestation, wetland degradation, and depletion of freshwater resources from land use changes and impacts of climate change are severe and urgent. We see this Award as giving us the resolve to take KTK-BELT to the next level with the help of UIAA and the global scientific community.”

“This is an ambitious project that covers all facets of mountain stewardship, from the educational value, to the livelihoods of people and the preservation of biodiversity and natural resources,” revealed assessor Marjorie von Strien, International Centre for Integrated Mountain Development (ICIMOD). Valérie Thöni, UIAA Project Officer, added: “The project is the fruit of collaborative work between research and practitioners. This is quite unusual, as most of the time the scientific world and other stakeholders don’t interact so much. It is based on extensive research about the biodiversity and indigenous knowledge of the region. Then this knowledge will be passed onto local communities through place-based education and educational exchanges.”

Full details on the 2015 Mountain Protection Award winner are available in a dedicated news story.

The presentation of the MPA closed the 2015 General Assembly. “We thank the Korean Alpine Federation for their excellent organisation and warm hospitality and to all delegates and member federations for participating in a very productive, enjoyable and interesting General Assembly,” closed UIAA President Frits Vrijlandt.

The UIAA was founded in 1932 and has a global presence on five continents with 80 member associations in 50 countries representing 3 million people. The organization’s mission is to promote the growth and protection of climbing and mountaineering worldwide, advance safe and ethical mountain practices and promote responsible access, culture and environmental protection. The UIAA is recognised by the International Olympic Committee (IOC) for climbing and mountaineering.