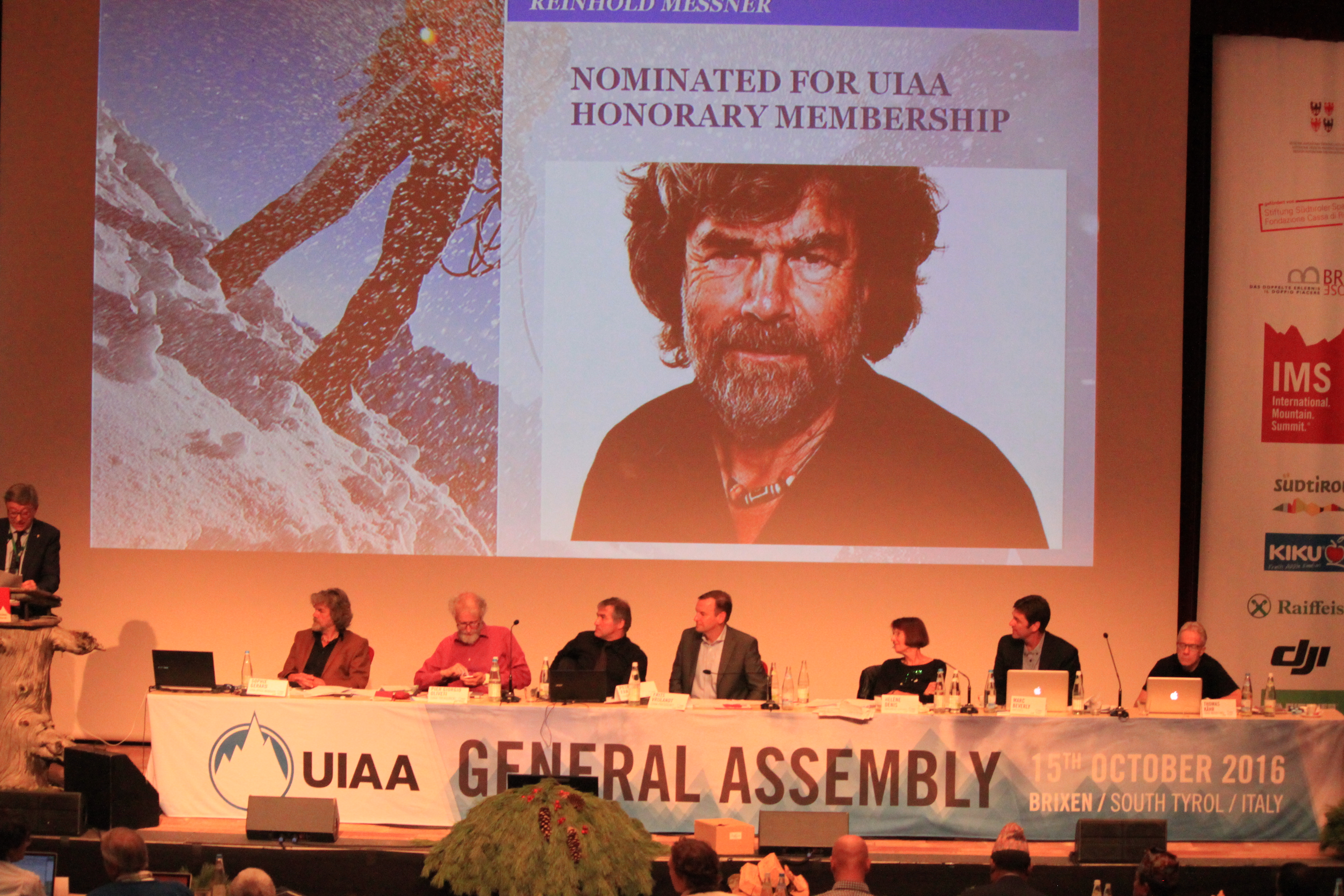 The 2016 UIAA General Assembly was held in Brixen (Bressanone), Südtirol, Italy from 12-16 October. The event, the largest annual gathering of UIAA member federations and representatives, took place during the International Mountain Summit (IMS), and was organised by the Alpenverein Südtirol AVS.  The event welcomed over one hundred delegates from all continents and witnessed a number of exciting and significant developments.

Frits Vrijlandt was re-elected as the UIAA President and now starts his second four-year term.

Mountain Wilderness was announced as the fourth winner of the annual UIAA Mountain Protection Award. Frits Vrijlandt was re-elected as UIAA President and now begins his second four-year term. “I am honoured to have served as the UIAA President over the past four years and very happy with what has been achieved. We succeeded with much of our Strategic Plan and we now have a new one to follow. I am looking forward to the next four years working together,” explained Vrijlandt.

In a recent interview, Vrijlandt underlined the progress made by the UIAA since his election to the role in 2012. Meanwhile, Yongfeng Wang (Chinese Mountaineering Association) was elected to the UIAA Executive Board, ensuring it now has representation from the continent of Asia. Hélène Denis, Thomas Kähr and Pier Giorgio Oliveti were re-elected as UIAA Executive Board Members.

The UIAA Vice-President Peter Farkas presented the UIAA Strategic Plan for the period 2017-2020. This is focused around the UIAA’s three core pillars of safety, sport and sustainability. The Plan was approved by the UIAA member federations. “The Mountain Wilderness project was the highest scored project among the assessors for this year’s award process, not just for its impressive commitment and action on removal of obsolete facilities, but also because of its commitment towards sensitization and education that forms part of their activities,” explained UIAA Mountain Protection Commission President Dr Carolina Adler. “This crucial aspect of socio-cultural outreach is also very important for education and for sustaining the success of these removal efforts in the long run, and so we commend Mountain Wilderness France for including this aspect as an integral part of the project. Seeing the tangible results and landscape transformation towards a more aesthetic mountain environment as a result of this project, is also very impressive.”

A dedicated article on Mountain Wilderness will be available in October’s newsletter. The UIAA Mountain Protection Award is sponsored by Golden Rock Travel and Western University of Azerbaijan. The final act of the 2016 UIAA General Assembly was the awarding of UIAA honorary membership to Reinhold Messner.Brixen-born Messner was recognized by the UIAA for his legendary feats in the world of mountaineering, including his status as both the first man to climb all fourteen of the world’s 8,000m peaks and as the first climber to document a solo ascent of Mount Everest without supplemental oxygen. A feat which many believed to be impossible. Throughout his life, Mr Messner, who chooses to climb alone and without the support of artificial means, has always challenge the perceived limits of what is possible. These are just some of the incredible achievements of Mr Messner throughout a career which has seen over 3,000 climbs, many on new routes.

Mr Messner, a climber, writer and photographer and one-time member of the European parliament, was also recognized for his commitment to sharing his adventures and passion for the mountain environment, which includes his numerous works of literature and foundation of six museums dedicated to art, culture, religion and peculiarities of mountain regions throughout the world.

“Mr Messner is a true pioneer and an individual who has pushed the boundaries of mountaineering, setting new standards for future generations by challenging the perceived limits of what is possible,” explained UIAA President Frits Vrijlandt. “An individual who has climbed throughout the world, and on many new routes, Mr Messner is the global ambassador for climbing and mountaineering.” Elected for UIAA Management Committee, as representatives of: