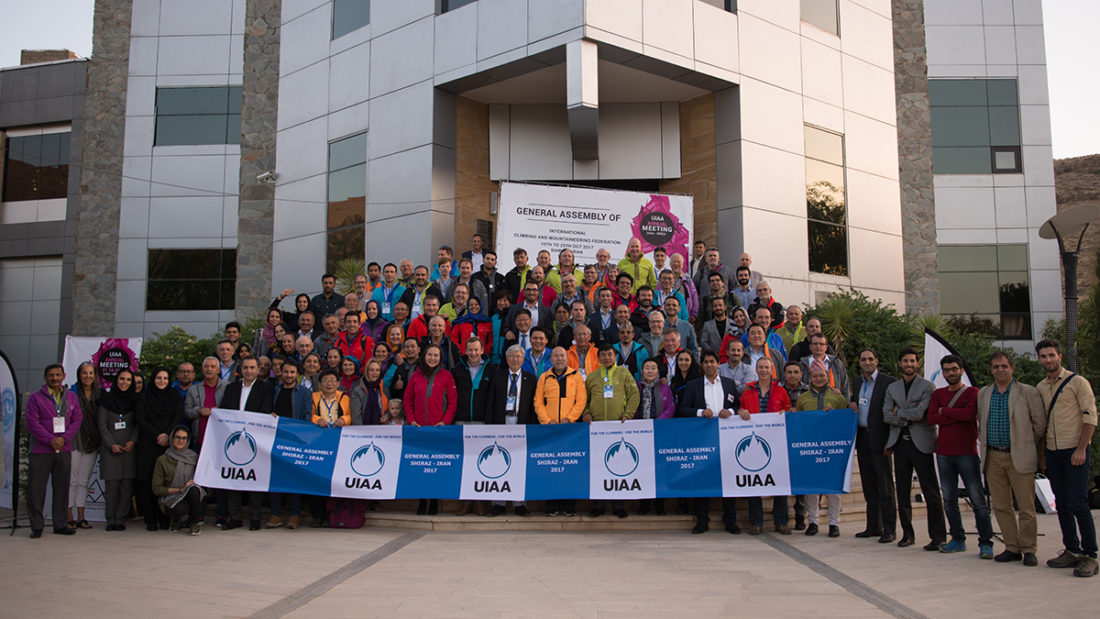 UIAA Vice-President Peter Farkas (left) presented more specific details about the progress made during the first twelve months of the current four-year plan across the UIAA’s three pillars of safety, sport and sustainability. Among the objectives which had been met included ‘maintaining the highest level of standards in safety through continuous revision and development of new standards’; ‘good governance in organisational aspects of rock climbing and ice climbing’ and ‘innovation in promoting good practices in mountain sustainability’. A significant development in the sport of ice climbing saw the election of Kendra Stritch (AAC, United States), Nikolai Primorev (RMF, Russia) and Gordon McArthur (pictured above, ACC, Canada) to the Ice Climbing Commission. All three are current ice climbers whose involvement in the Commission demonstrates the UIAA’s desire for athletes to have an even stronger voice in the future of the sport.

Other voting matters included approval for the support of Alpinism as a World Cultural Intangible Heritage. Peter Muir (ACC, Canada) was re-elected as Continental Representative for North America in the UIAA Management Committee and Stuart Gray (NZAC, New Zealand) for Oceania. Franz Stämpfli, Dennis Poncelin and Marco del Zotto were elected as members of the UIAA Court.

The Mount Everest Biogas Project (MEBP) was announced as the overall winner of the 2017 UIAA Mountain Protection Award. The United States-based project is a volunteer-run, non-profit organization that has designed an environmentally sustainable solution to the impact of human waste on Mt. Everest and other high altitude locations. The Mount Everest Biogas Project (MEBP) is the fifth winner of the annual Award joining projects from Ethiopia, Tajikistan, Nepal and France. Since 2013, over 80 projects from 37 countries have been showcased as part of the UIAA Mountain Protection Award platform. A full report can be found here. The UIAA Management Committee meetings and General Assembly provided excellent networking opportunities for all stakeholders. In particular, the UIAA Commission Presidents’ meeting offered the chance for delegates to discuss even closer cooperation and joint projects. Collaboration was also at the fore when the UAAA (Union of Asian Alpine Associations) held their continental meeting on the morning after the GA.

Minutes from the meeting will be available to UIAA members in due course.

The UIAA thanks the Iran Mountaineering and Sport Climbing Federation (IMSCF) for their excellent hospitality and hosting of the event. Extra activities offered by the IMSCF included hiking and climbing tours which enabled delegates to spend time appreciating the natural beauty and wilderness of Iran.