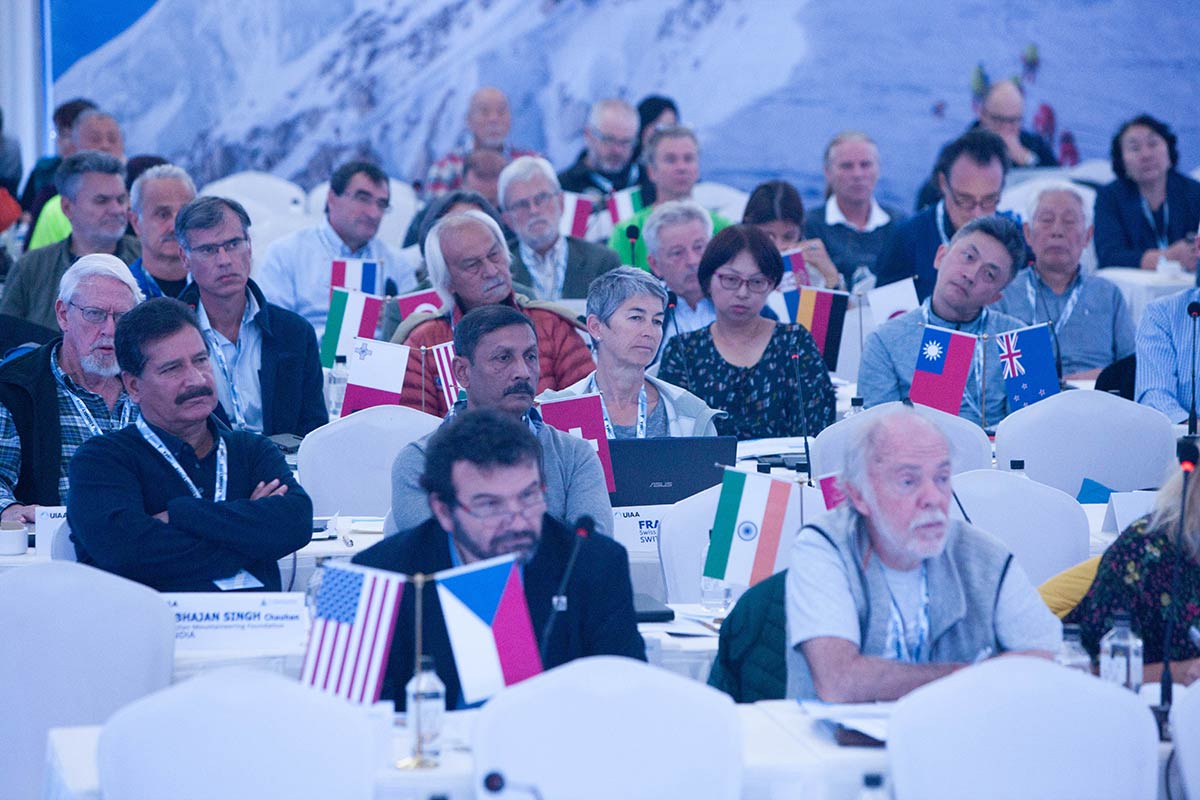 The event commenced with a welcome message from Mr Tserenbat Namsrai, Mongolian Minister of Environment and Tourism with Tulga Buya, President of hosts, Mongolian National Climbing Federation (MNCF), later providing an address which highlighted the many diverse projects undertaken by a dynamic federation.

Frits Vrijlandt’s UIAA Presidential report included highlights from the UIAA Annual Report and details on recent progress across the federation’s safety, sport and sustainability pillars. To provide the opportunity for UIAA members to play an active role in shaping the federation’s future, a World Café format was organised as part of the GA programme.

This forum dually offered members a platform to present their ideas, recommendations and concerns, as well as a greater opportunity to interact. The valuable points raised during the World Café workshop will form a crucial role in helping reshape the future UIAA vision and strategy.

The World Café workshop was followed by a forum for UIAA’s Commission Presidents who were able to address member interests in informal round table meetings.

“This was one of the best General Assemblies of the last twenty years,” explained Vrijlandt. “We enjoyed fascinating and constructive dialogue with our members, a more diverse GA programme and above all thank our fantastic hosts the Mongolian National Climbing Federation who made every effort possible to ensure that all delegates will remember their time in the country fondly. Regarding the GA itself, there is a lot of work ahead but the UIAA is committed to acting on the advice of its members as it shapes the coming years.” Vrijlandt paid tribute to the outstanding contributions of two outgoing Board members. Peter Farkas, a long servant of the UIAA and EB member for twelve years, as well as Marc Beverly, who finished a four-year term, were recognised for their efforts. “Both Peter and Marc have committed an enormous amount of time and energy to the UIAA making valuable contributions to the growth of the federation. I thank them for their great support.” Farkas will continue to be involved with the UIAA in a new role as full member of the Mountaineering Commission.

Members were reminded of many existing resources, and some new ones, provided by the UIAA. This includes the newly-launched online rock and ice climbing festival search tool, a UIAA platform which offers federations the chance to promote events in their region. The UIAA Safety Standards, high-altitude medical advice, training standards and mountain protection projects continue to evolve, providing expertise at the benefit of members and entire climbing and mountaineering community. Expertise which comes directly from the valuable volunteer efforts of UIAA Commission members, nominated by UIAA member federations worldwide.

In developing its services for members, the UIAA will improve its members page to offer federations the opportunity to exchange more details about climbing and mountaineering in their own countries. A Donate page will also be available to members who wish to showcase initiatives and causes they are supporting. Both projects will be rolled out during the first quarter of 2019. Community Action Nepal (CAN) was announced as the overall winner of the 2018 UIAA Mountain Protection Award at the gala dinner which followed the GA.

Following KTK-Belt in 2015 and the Mount Everest Biogas Project in 2017, CAN is the third winning project which works closely with Nepalese mountain communities.

Based in the UK, CAN was set up by legendary mountaineer and former UIAA Management Committee member Doug Scott CBE, the first Briton (with Dougal Haston) to climb Everest in 1975. In creating CAN, Scott wanted to give something back to the mountain people of Nepal who had helped him climb 14 peaks in the country. It was a key legacy which emerged from the historic 1975 British Everest SW Face Expedition. The 2018 MPA Trophy was collected by Trish Scott, wife of Doug, and Murari Gautam, CAN Nepal UK’s country representative.

CAN was one of eighteen projects nominated for the 2018 UIAA Mountain Protection Award.  This included six re-nominations and twelve new projects active in 25 different countries. Giroparchi Nature Trail by Fondation Gran Paradis, Italy, was named runner-up and A system for the management of health and safety in wilderness areas by Tracks Safety, Argentina, was recognised as the best new initiative. A full news release dedicated to Community Action Nepal can be found here. The winners of the 2018 UIAA Rock Climbing Festival Award were also announced.

UIAA Rock Climbing Panel representatives, Anne Arran (BMC), UIAA Management Committee, and Marc Beverly, UIAA Executive Board, presented the concept of the Award which was launched in 2015 and is dedicated to a different continent each year. The focus in 2018 was South and Central America with three festivals recognised.

In 2019 the Award, which helps promote the growth and development of rock climbing festivals which align themselves with the values of the UIAA showing an active commitment to safety, sport and sustainability, will focus on Asia. Further details on the Award winners and the opening of the 2019 Award will be available soon. Excellent organisation and a rich variety of cultural events ensure this GA will be fondly remembered by attending delegates. As part of the weekend, the MNCF ran a ‘One Mountaineer, One Bag’ clean-up campaign, inspired by the UIAA Respect the Mountains Series, which saw the involvement of two cities, over 22 local clubs and 300 participants.

The date for the 2019 General Assembly was confirmed as 2 November with the event hosted by the Mountaineering & Climbing Federation of Cyprus.

The Turkish resort city of Antalya was voted as the location for the 2020 General Assembly. The event will be hosted by the Turkish Mountaineering Federation (TDF).

Pictures from the 2018 UIAA General Assembly, courtesy of the MNCF, can be found here.

Presentations, and official minutes, will be uploaded to the relevant UIAA portals in due course.