The goal of Giroparchi Nature Trail is to allow new generations to acquire full awareness of the exceptional beauty of the natural heritage that characterizes our mountains, to understand the biodiversity of the first Italian National Park, the Gran Paradiso National Park, and to become aware of the importance to build a sustainable tourism approach by respecting the flora and fauna. At the same time, during the trekking, teenagers acquire tools to communicate about the potential of the park, improve their vocabulary, learn English expressions and stimulate curiosity in natural resources.

Giroparchi Nature Trail is a nature trekking in the heart of the Gran Paradiso National Park – the oldest park in Italy – addressed to teenagers between 11 and 14 years old mainly from the Aosta Valley region but also from all over Italy. Two groups of teenagers will spend five days each, hiking on the historical paths of the Park guided by two professional English native speakers (a hiking guide and a language teacher) and by a Fondation Grand Paradis employee who speaks English. During the trekking all activities and games will be in English in order to allow the teenagers to acquire skills and knowledge in a friendly and convivial way.

The participants will hike along historical Alpine trails, which have been tracked by the Royal Park guards in the 19th century, and will spend the night in local Alpine shelters based in the Gran Paradiso National Park and will have the opportunity to meet local people as well as international trekkers. The lowest point of departure is usually around 1,600 m.a.s.l. and the maximum altitude around 2,600 m.a.s.l., with amazing views on glaciers, peaks, screes, waterfalls, lakes and mines. Each year this experience takes place in the Gran Paradiso valleys, but every year the route changes to provide new knowledge and different landscape. Furthermore, every year the trekking has a different topic: e.g. to discover the 5 senses in nature, mines, geology; to learn about wildlife aquatic fauna; to focus on the history of the connecting paths used by King Vittorio Emanuele the Second during his hunting journeys in the area (this is the 2018 topic). The trekking routes are chosen by taking into consideration the annual topic and in the everyday trekking experience there will be an in-depth focus on it with guided tours, visits of museums or ancient monuments, presentation of local traditional activities and flora and fauna observation. 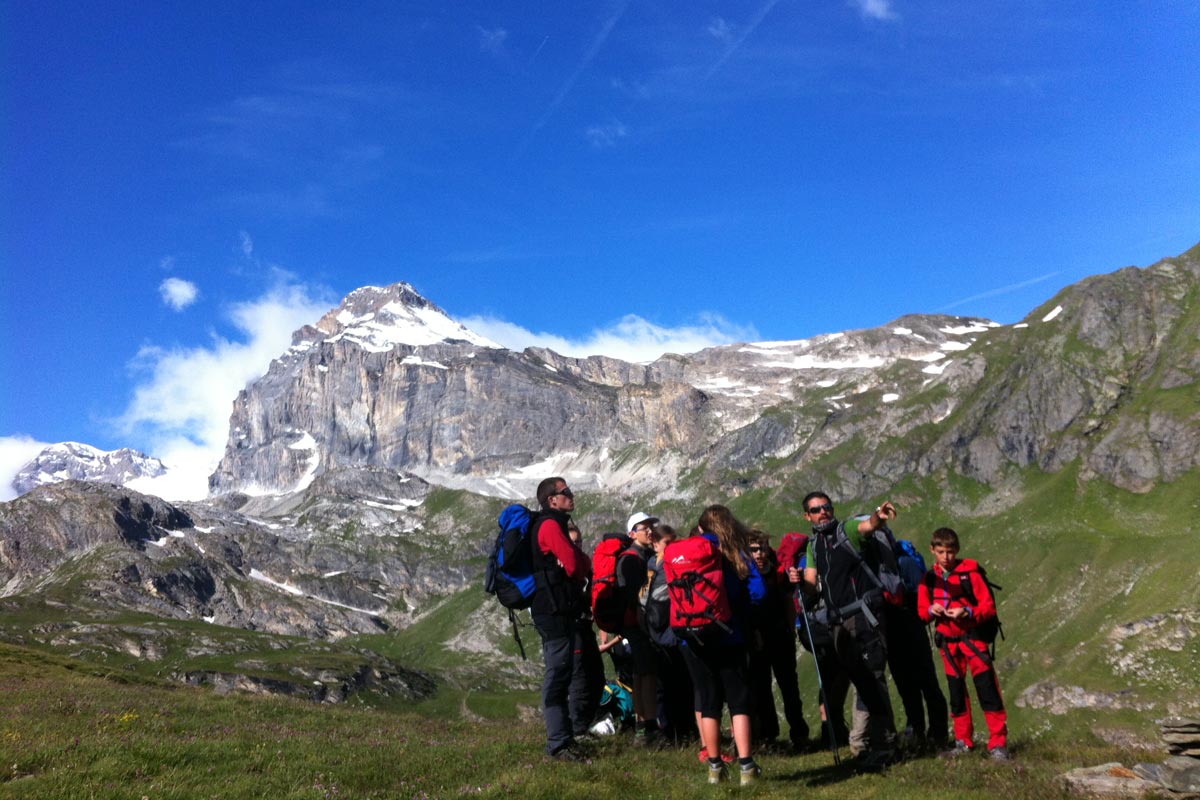 Fondation Grand Paradis chose to create a link with the young generation coming from the villages of the Grand Paradiso area. Two periods with 20 places per period are available and the priority will be given to the teenagers who live in the seven municipalities of the Espace Grand Paradis. Those municipalities have very specific and different social, natural, environmental and demographic characteristics, with a heterogeneous historical background but a common denominator: they are all embedded in the territory of the National Park. The prevalent identity is linked to the protected area which in the last centuries has given the opportunity to exchange traditions, products, ideas and to establish a long term shared vision and projects. With those tools, villages and people became aware of their responsibilities towards nature and future. Giroparchi Nature Trail has been created in order to highlight those concepts, give emphasis to the roots and give the chance to create networks between peers of different villages. The project goal is to enhance nature and cultural tourism in the Espace Grand Paradis by promoting the integration and development of economic activities related to sustainable tourism, as well as by discovering the territory with a system of connected trails, local inhabited centres and sites of cultural interest.

The Gran Paradiso National Park participates in the organization of the trails and provides a professional Park guard who has deep knowledge about the explored area and its characteristics. Children will learn about protected areas management, behaviour rules, security tips and about how to hike in a mountain region. Many stories about local customs, myths and historical memories are told in the evening.

Tradition is a key starting point to underline the features of the different areas and villages which the participants will cross. This year the trekking project will strongly focus on the Cogne village, in particular on its mining site, on how it has changed the territory and on the local lifestyle during the mining time and on local economy and future innovation.

Fondation Grand Paradis coordinates the project, carries out common actions and manages the interventions related to the Gran Paradiso territory. The municipalities of Aymavilles, Introd, Villeneuve, Rhêmes-Saint-Georges, Rhêmes-Notre-Dame, Cogne, Valsavarenche are also involved both as decision makers (because they are part of the Board of Directors of Fondation Grand Paradis) and as beneficiaries of the project outcomes since the inhabitants of these municipalities have the priority in the application to Giroparchi Nature Trail. At a governance level, the Gran Paradiso National Park (also part of Fondation Grand Paradis Board of Director) is also a project collaborator, in fact it contributes to the project at a decision-making and finance level. Aware of the importance of sharing these values with the young generation and of a local networking, the Park strongly supports this project. The Permanent Secretariat of the Alpine Convention also plays a role in the project, in particular by supporting Giroparchi Nature Trail through promotion actions of the Alpine Convention, its Protocols and its objectives with the card game “The World in the Alps” and the use of English questions about the Alpine Convention in the digital app.

The deputy of the Aosta Valley Autonomous Region is the link with the regional management and supports the communication and information activities regarding natural and environmental events. All members are actively encouraged to share the good practices, ideas and opportunities which Fondation will then implement and redeploy on the local territory. Sharing information and support are key sources to the growth of the territory as well as vehicle of investments and tourism attraction. In a long-term view, the project aims at increase the permanent stay of the young generations in mountain areas. Moreover, all activities are addressed to support local entrepreneurial investment and businesses with the goal of a sustainable long-term growth.

Fondation Grand Paradis chose to promote tourism and knowhow by investing in new generations, giving them the opportunity to live in our mountains, to deep their knowledge of the territory and to be in contact with local communities and with who works every day to preserve nature and culture. We believe that only by experiencing the mountain philosophy it is possible to fully understand both the difficulties and the incredible beauty of the Alps. Walking for 5 days in nature can be a good example for teenagers involved in the Giroparchi Nature Trail. Many trails have been organized to promote our territory but the innovation of this project is the combination of learning a new language and being in contact with nature.

Studying English outside the classroom in a real context will lead the participants to live an unforgettable experience by making the learning process easier and quicker. The aim is to train future generations with contents and experiences, to wide their knowledge and to allow them not to leave the territory by creating new jobs. English can be consider a global language, so being able to share the local natural and cultural heritage worldwide with this common language will allow to create a balance between the permanent communities and the need to continuous renovate and innovate in the future and at an international level as well.

That is why sharing the concepts of biodiversity conservation, sustainable resource, sustainable waste management, climate change effects, the environment protection through culture and education, nature protection, sustainable tourism and respect of local traditions during this experience are benefits for all participants. The binomial “knowledge of the territory” and “language skill” represents a key resource for the future of young generations in an area devoted to sustainable and slow tourism.

This project aims at enhancing the natural and cultural peculiarities of the Aosta Valley side of the Gran Paradiso through the rehabilitation of the old royal trails network and mule paths once used by King Victor Emmanuel the Second.

It is important that the young generations learn the features, history and heritage of the National Park and the territory where they live because it is a valuable resource which needs to be protected and promoted. 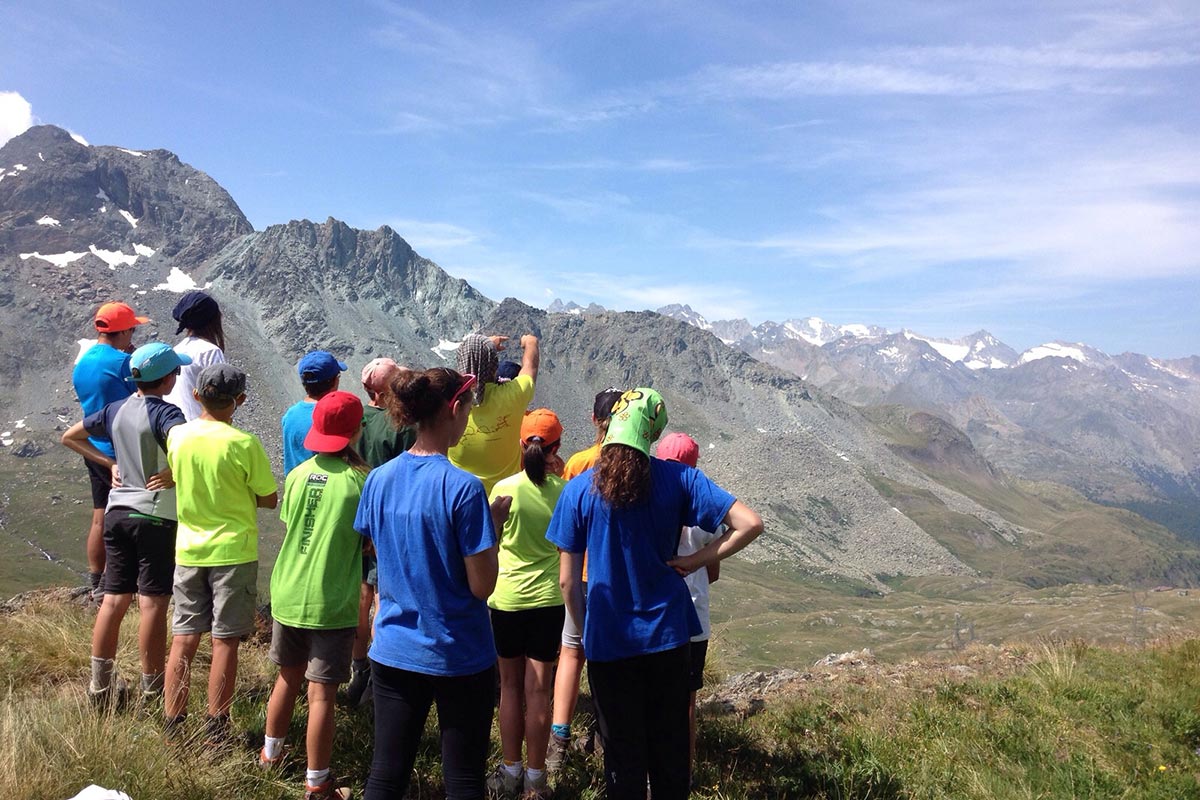 The project strategy focuses on giving value to the human and cultural growth (linguistic and scientific) of young generations and to the conservation of the extraordinary natural heritage of the Park. The project merges different needs and interests of all the stakeholders of the territory.

Giroparchi Nature Trail is promoted in schools all over the Aosta Valley region; brochures, information and posters were given to the institutions. Many families have already had the opportunity to get to know the project.

At the same time, Fondation Grand Paradis communicates the project through press releases sent to local and national press offices, a dedicated website with all the project details and a constant update of news, posts on Facebook and on social media, articles in the local and national press. Participants who spread their impressions to friends are the most important communication activities. For these reasons, after this experience photos and videos sharing is advised; many pictures are uploaded on the website so that everyone can easily access and download contents and information. A multilevel governance ensures a successful and widespread communication. Every year we launch a #, last year it was #lifeasaranger.

The enthusiasm for this project comes from teenagers and their families who are motivated to share and talk about the experience they lived. A second trekking experience has been added in order to increase the chance to participate for all the applicants. It is still not enough and there is a waiting list but because of the weather conditions, trail running competitions in the area and guides availability it is not possible to provide more experiences. We believe that Giroparchi Nature Trail can be a replicable practise in other countries and with the support of UIAA we could reach more institutions and share a project focused on new generations.