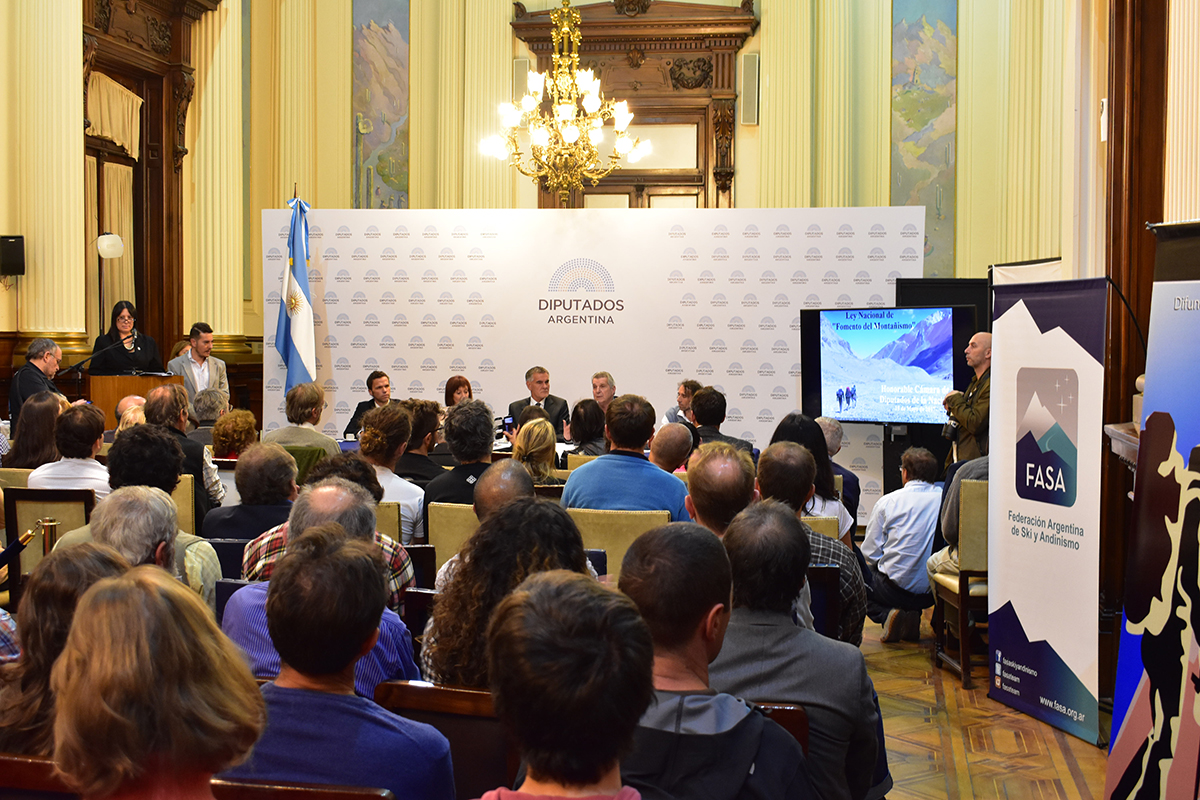 The UIAA is sharing the following press release from its member federation – Argentine Federation of Ski and Andinism (FASA) – related to free access to mountains and promotion of mountaineering in Argentina.

The following press release was published on Monday 16 May, 2017

This Monday in the Delia Parodi Hall, National Congress, a draft law in favour of free access to mountains and promotion of mountaineering was presented. This law will allow public access to mountain areas for recreation and sport activities, which today is currently restricted.

The event was presided by Deputy Carlos Castagneto, who introduced the Law, and national deputies, Liliana Mazure and Horacio Alonso. The Secretary of Andinism of the Argentine Federation of Ski and Andinism (FASA), Martín Lascano, and Mauricio Bianchi, representative of the Argentinean Andean Collective “ANDINISTAS ARGENTINOS”, presented in the oratory. In addition, advisers, specialists and mountaineering associations from across the country were also in attendance. The project’s objective – promoted by FASA – is also aimed to foster and encourage activity. In this regard, Martín Lascano said: “Mountaineering is a sport that arises from the same need of men exploring: their curiosity. With that curiosity, we begin to cross mountains with other goals, until arriving at what is known today as andinism. FASA is a full member and is actively working with the International Climbing and Mountaineering Federation (UIAA). We have joined forces to expand sporting practice and show the world today what is happening in South America. Argentina has a preferential position in relation to these sports and the way we are seen is changing.” Lascano also mentioned the work of the UIAA with FFCAM (Fédération française des clubs alpins et de montagne) in declaring alpinism as an Intangible Cultural World Heritage by UNESCO and that both proposals work in the same direction. (More details here).

According to Deputy Castagneto, this law will declare the mountains as “public property, having a sporting, cultural and socio-recreational interest”. These activities which are currently restricted, involve different social areas, such as education, sport, recreation, science, culture and religion. At the same time, the intention was to find a solution that does not force the owners to leave the land, but to find a mutual agreement, based on the compression of interests and practices.

Mauricio Bianchi, commented that “the project is pioneering in Latin America, given that there is no other project of this nature in the rest of South America.” In addition, he considered it positive that “it enters from the Commission of Sports, and not from Tourism”. Bianchi stressed that “we do not seek to create a right, but to preserve a right that we already have. It is a project that arose from the mountaineers and will now head to Congress”.

The project has to now go through the Sports Commission and for approval, it has to pass to General Legislation, where they will evaluate it before sending it to the Chamber of Deputies and Senators.