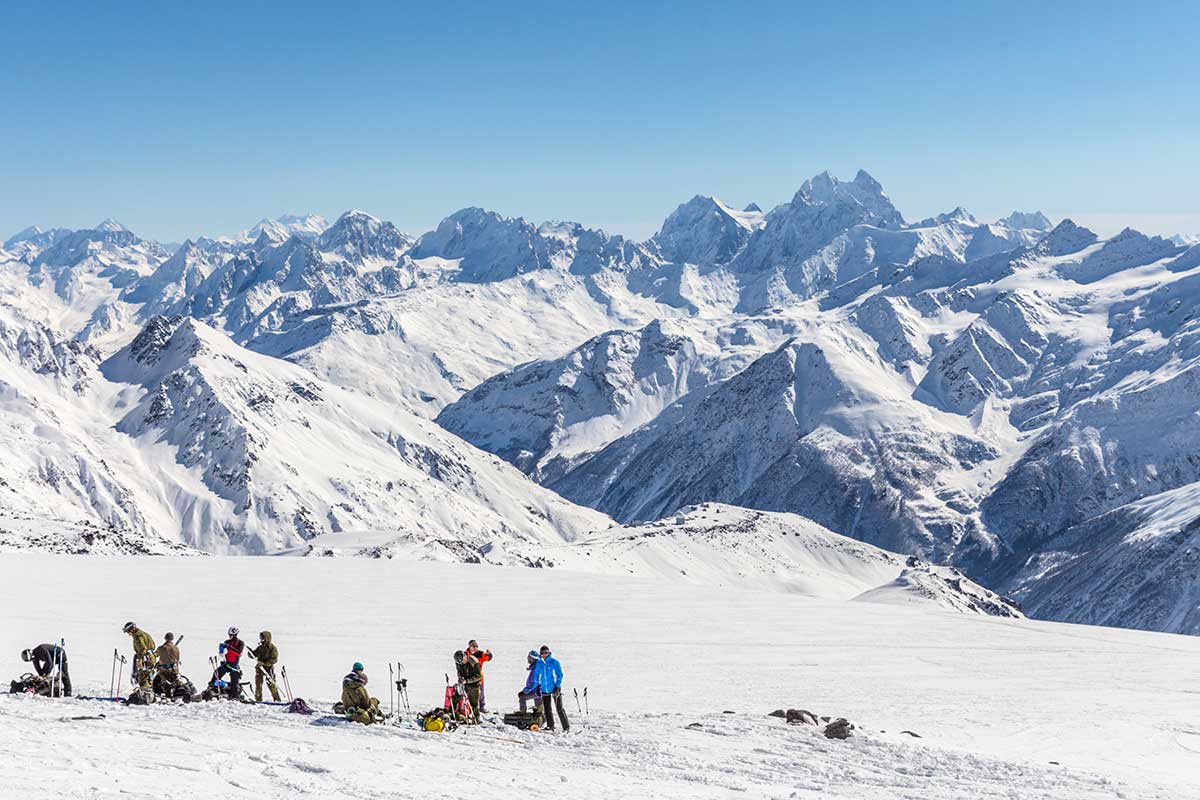 The UIAA’s latest extract from its Medical Commission’s high-altitude advice papers focuses on contraception and period control at altitude. This paper is primarily intended for doctors, non-medical persons and trekking/expedition operators and takes into account is the fact that a large proportion of women do not principally use contraception during their travel for contraceptive reasons but for regulating and controlling their periods. The paper is available in English, Czech, Farsi, German and Italian and was first published in 2009.

The effect of High Altitude on menstruation

The menstrual cycle can be modified by physical, physiological and emotional stress, all of which occur at high altitude. Jet lag, exercise, cold and weight loss can also alter the pattern. There are a number of contraceptive methods available, however, none of the following forms of contraception, with the exception of condoms, gives any protection against Sexually Transmitted Diseases (STDs), including HIV and Hepatitis B and C.

The following is a few of the contraceptive methods available to travellers.

Rhythm Method
The rhythm method and temperature method, which are already unreliable at home and sea level, become even more so when travelling, in hot climates or at altitude due to the effect on the menstrual cycle.

Condoms
Every traveller should carry condoms even if they are just “to lend to a friend in case”. The quality of home purchased condoms is normally high and the fit designed for the national average. Female condoms (Femidom) may be totally unobtainable abroad. Both sorts of condoms give protection against Sexually Transmitted Diseases (STD’s) and can be combined with hormonal methods for extra safety. Remember that rubber is prone to weakening in some hot climates and tubes of spermicidal cream can be messy if they break in a rucksack. Just as with sanitary towels and tampons, thought must be given on how you propose to dispose of barrier contraceptives after use in a remote area in a developing country with a poor infrastructure. Locals will rummage through rubbish and animals will be attracted by body smells.

Cervical Caps/Pessarium
If you are used to and happy with this method, stick to it but remember that rubber is prone to weakening in hot climates and tubes of spermicidal cream can be messy.

Intra Uterine Contraceptive Devices (IUCD’s/Coils/Spirals)
Copper IUCD
If this is your normal method of contraception and it suits you, stick with it but do not change to it in the few months just before departure since the effects on periods are unpredictable. Often the period lasts longer, with more blood loss than previously and is sometimes accompanied with an increase in lower abdominal discomfort. Each Copper IUCD works for at least ten years.

Efficiency is not affected by stomach upsets or antibiotics and time zone changes pose no risk.

Hormone IUS (“Mirena”)
This “modern coil” gives contraceptive reliability and period control due to the slow release of the progesterone hormone from its stem. If this is your normal contraceptive method, stick with it and if you have plenty of notice of your expedition, you may wish to consider changing to this system. Do not change in the few months prior to departure since you need to be confident that it suits you. Each Mirena is guaranteed for at least five years.

Efficiency is not affected by stomach upsets or antibiotics and time zone changes pose no risk. With the Hormone IUS period spotting may, initially, occur but this usually settles with the second or third month. Periods may eventually stop altogether.

Oral Contraceptives (OC’s)
Combined Oral Contraceptive Pill (COC)
This is the commonest contraceptive pill and contains a balance of two hormones, oestrogen and progestogen. It is normally taken for 21 days followed by a seven-day gap when a “period” usually occurs. If taken as directed, and not malabsorbed due to vomiting or diarrhoea, it is a very reliable method of contraception with good period control. To avoid or significantly reduce bleeding, Oral Contraceptives can be taken continuously for several months (but spotting may occur especially after the first three months).

This can obviously be a major advantage but it is still worth carrying some form of sanitary protection in case of slight break through bleeding. There is no proven advantage or disadvantage for altitude acclimatization with oral contraceptives.

Three risks should be known:
• It may be difficult to respect the exact time of administration in expedition, compromising contraceptive efficiency.
• The efficiency may be compromised during and 7 days after the use of some antibiotics, especially broad-spectrum penicillines and tetracyclines.
• One theoretical risk of the combined oral contraceptive Pill is oestrogen induced thrombosis during long stays at High Altitude, in combination with polycythaemia, dehydration, cold, and may be further increased by stormimposed immobility in a tent, especially in smokers. Very few incidents have been reported.

The risk is lower with the second-generation oral contraceptives (versus first- or thirdgeneration), which are recommended as a first choice of COC at High Altitude. To put everything into perspective it should be realized that smokers have a 6 fold increased risk for thrombosis and COC-users a 4 fold increased risk. Smokers who also use COC have a 21 fold increased risk for thrombosis. It is especially those women who have a form of thrombophilia who have the greater risk for thrombosis with a 20-35 fold increased risk for those positive for factor V Leiden, which is the most common mutation (3-5% of the population). It might be possible that this last group is responsible for a considerable part of the increased risk for thrombosis in COC users. A 1999 survey of 316 women on the Everest Base Camp Trek found that 30% were taking the combined oral contraceptive Pill, many for period control, and none came to any harm, but the data is limited. Women should consider avoiding the COC if they are to spend more than a week above 4500m. Below 4500m it is almost certainly safe in an otherwise healthy active non-smoking woman with no personal or family history of venous thrombosis or thrombophilia. As with all medication, make sure you carry a full set of spare pills in case of loss or theft. Trips to local pharmacies to get replacements are time consuming and it can be impossible to obtain your specific pill.

Injection Contraception (Depo-Provera) (“Prik Pill”)
These injections are given every 12 weeks and slowly release progestogen into the body. In terms of blood clotting they are as safe as the Progesteron only Pill. Efficiency is not affected by stomach upsets or antibiotics and one only has to remember to have an injection every three months. Time zone changes and potential loss pose no risk. With injectable contraception periods may, initially, be unpredictable but this usually settles with the second or third injection. Periods may eventually stop altogether. Many women find this an ideal expedition contraceptive and period controller but should be settled on it well before departure. If going for more than three months one could carry an extra ampoule and learn how to self-administer. If a jab is due during the trip away it may be safe and possible to have it early (get personal medical advice).

Subdermal Hormonal Implant (Implanon & Norplant)
Very similar to the injection. A flexible rod or rods of a slow release progestagen is implanted under the skin via a small surgical incision. It works for three years and has to be removed surgically. Again best to be well settled on this contraceptive method before departure and your contraceptive choice should be discussed with your personal medical advisor.

Adhesive Hormonal Plaster (“Pill Plaster”)
With this impregnated plaster stuck to the skin a small dose of oestrogen and progestagen are absorbed through the skin. The risk of thrombosis is higher than the COC and this combined with the difficulty of ensuring good adhesion when sweating heavily makes this method unlikely to ever be popular for expedition use.

Vaginal Ring (“Nuva Ring”)
This is a small, soft vaginal ring and gives contraceptive reliability and period control due to the slow release of two hormones, oestrogen and progestagen, and in a much lower daily dose than in the combined oral contraceptive Pill.

After instruction the woman introduces the ring vaginally herself, the ultimate position of the ring in the vagina is not important for its action. The ring has to be worn uninteruptedly during three weeks and should be removed exactly three weeks later at exactly the same day and time of the day it was introduced, followed by a ring-free period of 7 days (or less).

A disadvantage may be the slightly increased risk of vaginal Candida infection, which is a particular nuisance if traveling. To avoid or significantly reduce bleeding, the ring can be used continuously for several months (but spotting may occur especially after the first three months). This can obviously be a major advantage but it is still worth carrying some form of sanitary protection in case of slight break through bleeding.

Post Coital Emergency Contraception
Local women might also seek your advise on this matter and this is what you could advise.

Post Coital Oral Contraception. (“morning after pill”)
For up to 72 hours after unprotected intercourse a high dose of progesterone (Levonorgesterel 1.5mg) can reduce the chance of unwanted pregnancy. The earlier this is taken after unprotected intercourse the more efficient it will be. This is not suitable as routine contraception due to the high dose of hormone needed but some doctors will prescribe it for a traveler “just in case”. It comes with full instructions. It can be purchased over the counter in pharmacies or drugstores in many countries.

Post Coital IUCD
For up to 120 hours (5 days) after unprotected intercourse a Copper IUD can be fitted by a trained and experienced medical practitioner and should serve to prevent pregnancy. If the “morning after Pill” – method is not available within 72 hours and contraception is desperately seeked for, for example after rape, this might be an alternative as it provides a timehole wherein to seek the necessary medical help.

Sterilization
For males or females it is virtually 100% effective as a contraceptive. No effect on blood clotting or on periods. Nothing to remember, but permanent!

Steroids with progesteronic effect (ata: Lynestrenol, Norethisterone)
If taken as directed these can be used to postpone a period and regulate the menstrual cycle but are not effective alone as a contraceptive. Get personal medical advice.

The full paper is available here.

This is the latest extract from a series profiling the UIAA’s renowned high-altitude medical papers. To discover more please click here.

Already published:
#1 Nutritional considerations in mountaineering
#2 Children at Altitude
#3 Mountain activities for people with pre-existing cardiovascular conditions
#4 Avoiding the perils of Kilimanjaro
#5 What you need to know about water disinfection in the mountains
#6 Advice for Gap Year Explorers. How to Check The Quality of a Commercially Organised Trek or Expedition
#7 Dealing with Eye Problems in Expeditions
#8 A Guide on When and How to Use Portable Hyperbaric Chambers
#9 Golden Rules for Novice Climbers
#10 Advice for Women going to Altitude
#11 Advantages and Disadvantages of Using Walking Sticks in the Mountains
#12 Emergency Field Management of ACS, HAPE and HACE
#13 Diabetes
#14 People with Pre-Existing Conditions going to the Mountains
#15 Traveller’s diarrhoea – Prevention and Treatment in the Mountains
#16 The Effects of Extremes of Temperature on Drugs