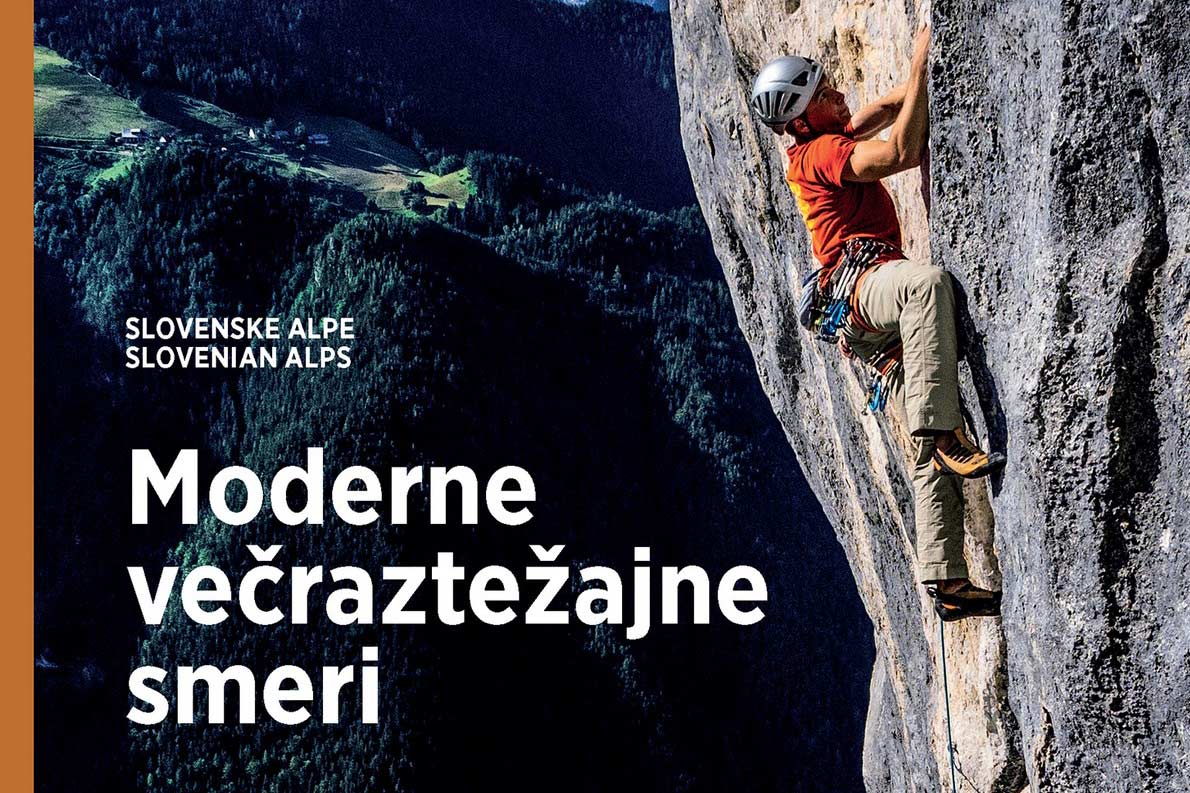 The Publishing House of the Alpine Association of Slovenia (PZS, a UIAA full member) has released a new guidebook: Moderne večraztežajne smeri (Modern Multi-pitch Climbs) by Andrej Grmovšek and Viktor Relja. It’s the first of its kind in Slovenia and all the essential information is provided not only in Slovenian but also in English.

Andrej Grmovšek and Viktor Relja have compiled 255 routes on 58 rock faces of the Slovenian Alps, ranging from 4b to 8a+ and up to 700 metres in length.

All of the routes in the guidebook are either partially (at least the belay stations) or fully bolted, but they differ in difficulty, length, and commitment. “This is the first guidebook of its kind in Slovenia. Although some of these routes have been around for quite a while, many new climbs have been bolted in recent years, which was one of the reasons we decided on this project. We started working on it about two years ago and the intensity ramped up in the last ten months,” said the editor, Marta Krejan Čokl.

The authors of the new guidebook, Andrej Grmovšek and Viktor Relja, are well-known figures in the Slovenian climbing community. Andrej has been climbing for over thirty years and doesn’t plan to stop anytime soon. After having done numerous difficult routes all over the world, he’s recently focused his energy on exploring the lesser-known walls of Slovenian mountains. His usual climbing partner is his wife Tanja, herself an excellent climber. Viktor has also climbed a lot with his wife Suzana; together they’ve opened almost two hundred routes, two thirds of which are fully equipped. They’ve left their mark on mountains outside of Slovenia as well.

This guidebook aims to provide an overview of Slovenian rock faces to climbers at home and abroad, as all the essential information has been translated into English. “There are plenty of guidebooks for Slovenian sport-climbing crags, but there hasn’t been a compilation of bolted multi-pitch routes in the mountains. Such guidebooks are very common in other countries. Until now, Slovenia was the only Alpine country without a guidebook for the so-called Plaisir routes. I hope that our book will fill this gap. It includes equipped routes of all grades on good rock, which are accessible to a wide variety of climbers. It provides a useful overview of many routes throughout the Slovenian mountains,” explained Viktor Relja.

Modern multi-pitch routes and sport-climbing are becoming increasingly popular in Slovenia. “Many of the Slovenian rock faces are characterized by poor rock quality and a lack of features, which makes them largely unsuitable for this type of climbing. This guidebook includes pretty much all of the bolted, modern multi-pitch routes in Slovenia,” added Andrej Grmovšek.

The guidebook has been published with the help of the Foundation for the Financing of Sports Organizations of the Republic of Slovenia.

The guidebook can be purchased here:
https://planinskatrgovina.pzs.si/shop