Amongst the main activities that were achieved on the Italian slopes in Gran Paradiso, were: a cross-border reconnaissance journey of public transport services; the purchase and assignment on a free loan of 105 electric pedal assisted city bikes to tourist operators; the installation of a network of hot spots to navigate the web for free at the main bus stops and squares of the municipalities of the Grand Paradis Mountain Community; the purchase and loan of 16 electric pedal assisted Mountain Bikes to the visitors of the Gran Paradiso valleys; the realisation of the smartphone app “Gran Paradiso Valleys” to inform visitors about the different means of public transport available to reach the Aosta Valley, the Gran Paradiso valleys and to move throughout the area; the support for the realisation of the smartphone app “SvAPP”, with real-time updates about the bus transit schedule to the different bus stops; the organization of events and initiatives to promote soft mobility and aiming at sensitizing a large public.

The project aims at providing tourists, residents and operators with tools for sustainable land use, facilitating low environmental impact and making them easy and comfortable. This is to promote the well-being of the population in terms of ethical and responsible management of resources and natural and cultural heritage of the Gran Paradiso area. 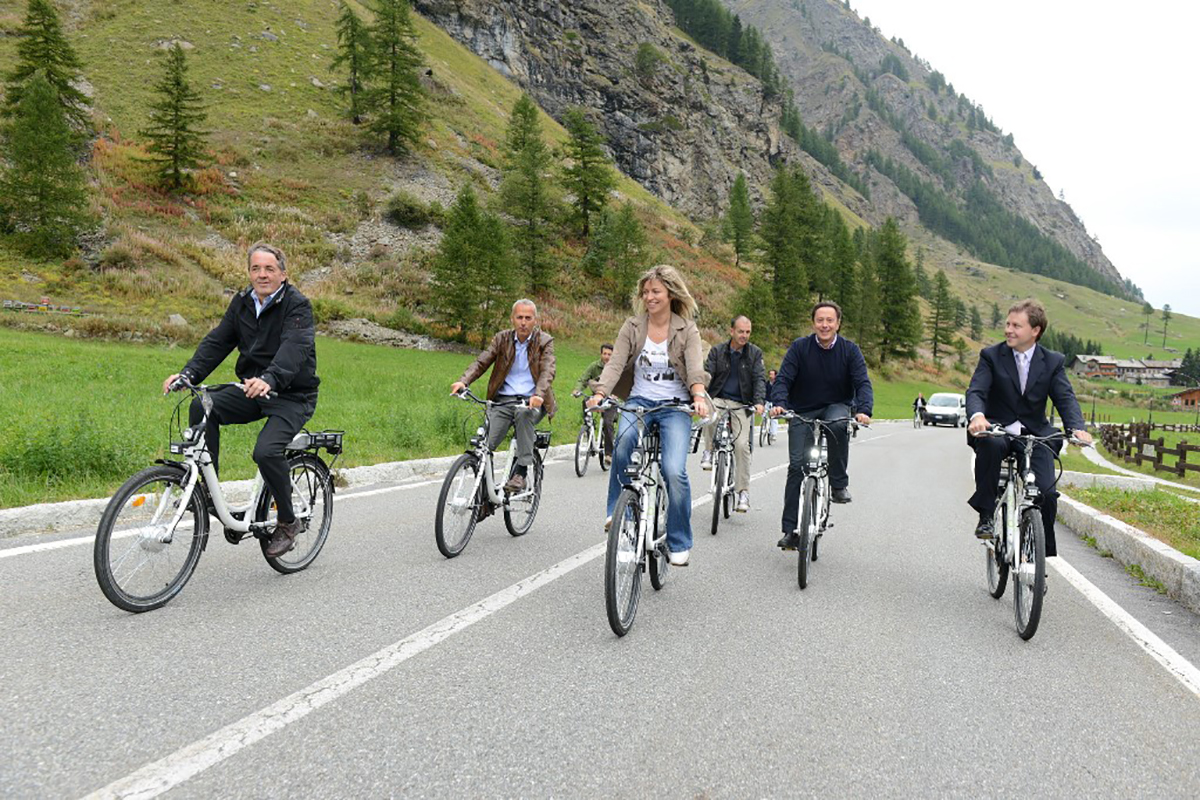 The project aims at enhancing the accessibility of the territories involved in different periods of the year and the day, with sustainable ways of transport; make remote areas reachable, repositories of the diversity of natural and cultural environments; increase the performance, reliability, flexibility and attractiveness of existent public means of transport; increase responsible behaviours related to personal mobility; favour the fluency of traffic; reduce the polluting and climate-changing emission due to traffic; use and spread ITS (Intelligent Transport Systems) technologies in mountain areas too; strengthen the image of the Gran Paradiso area and its choices in terms of sustainability.

Among the actions realised, 16 eMTB (electric mountain bikes) were acquired, making it possible for the public to pedal uphill like they were pedalling on flat roads, with the same effort. Bicycle rental is free of charge and reserved to Fondation Grand Paradis Pass cardholders The e-MTBs are available at the Visitor Centres of the Gran Paradiso National Park in Cogne, Valsavarenche and Rhêmes-Notre-Dame.

Among the activities of cross-border reconnaissance of public transport services, in 2012 Fondation Grand Paradis organised the first “Voyage-expérience ITER”, when eight Italian and French youngsters travelled to observe and study the weak and the strong points of the public transport service offer in the Aosta Valley valleys of Gran Paradiso National Park and in the Haut-Chablais, France. In June and July 2014, a second journey was organised, aiming at verifying the changes and improvements compared to the previous experience. Five youngsters travelled between the Italian and French valleys of Gran Paradiso and Haut-Chablais, strictly using only public means of transport and testing the various services accomplished by the partners of the project. The collected material was used by the participants to create a video-story of this experience, and was subsequently shared through different channels such as the Gran Paradiso Film Festival, the project website, Youtube and social channels of Fondation Grand Paradis, and by participating in the “European Cooperation Day video contest”. 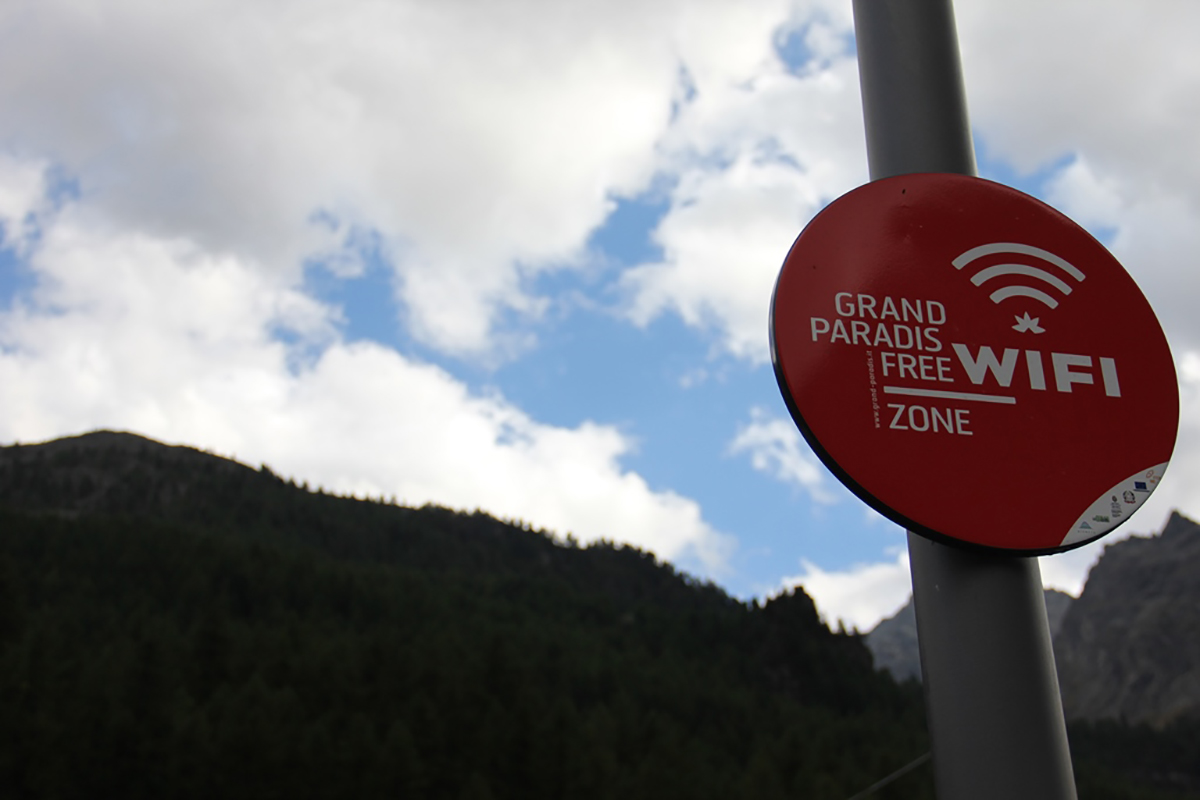 Within the project ITER Fondation Grand Paradis acquired 105 electric pedal-assisted bicycles. In the first semester of 2012 the bicycles were assigned on a gratuitous loan to the economic actors of the 13 municipalities of the Grand Paradis Mountain Community, who could use them in their facilities and during activities for the promotion of sustainable mobility on the territory. The spread of these vehicles aims at allowing tourist transfers over short and medium distances also in mountain areas.

In the summer of 2014, the project ITER completed the experimental support service for hikers intended for inter-valley trails. Created in the context of the Giroparchi project, it connects the Councils of the Gran Paradiso area at the bottom of the valleys (Aymavilles, Villeneuve, Introd and Arvier) to those located in the middle and top sections of the valleys (Cogne, Valsavarenche, Rhêmes-Saint-Georges, Rhêmes-Notre-Dame and Valgrisenche). The experimentation had a remarkable echo, that the Aosta Valley autonomous Region replied the service in other tourist areas (Valtournenche and Val d’Ayas) and still activates it nowadays, in 2017. The total number of users in the summer of 2014 was 545.

As part of the ITER project, the Grand Paradis Foundation has been involved in the creation and implementation of the “Grand Paradis free WiFi zone” network. The intervention aims at providing with the most advanced technologies a territory rich in extraordinary natural and cultural resources, in order to allow the widest and complete use. The network, consisting of a total of 21 connecting points, provides free internet access to residents and visitors at the main bus stop and adjacent public spaces of the all 13 municipalities in the Gran Paradiso Mountain Community. There is also the wifi internet connection of the Rê.V.E. Grand Paradis bike sharing service, accessible from the signal.This allowed an improvement in the efficiency and reliability of the service. Total access: 162.205. Always with the aim of increasing the performance, reliability, flexibility and attractiveness of the existing public transport services and employing and disseminating ITS (Intelligent Transport Systems) technologies in mountain areas as well, the Svap Bus APP, which provides real-time information on the SVAP bus timetables at the bus stops, indicating possible delays. The application, thanks to the GPS location, indicates the closest bus stops and allows you to store the most used stops, locate the development of each single line on a map and know any possible interruptions or temporary changes. Installations in 2014: 603. The project also created the “Gran Paradiso Valleys” APP, which presents all the information about the attractions and services of the Gran Paradiso territory. It is a real multimedia guide that can help and guide you through the discovery of the various points of interest in the area and offers you the possibility to plan your holiday and trips in advance and remote. Following the ITER project idea, the APP proposes, in addition to information about points of interest, indications about transport: from the various possibilities offered by public transport to reach the Aosta Valley to different and ecological sustainable mobility alternatives. Thanks to the GPS localization you can learn about the surrounding natural and cultural beauties, including more than 80 routes divided by difficulty and equipped with map, description, duration, difference in altitude and type of terrain. Between April 2015 and December 2016 there were 1,758 total downloads.