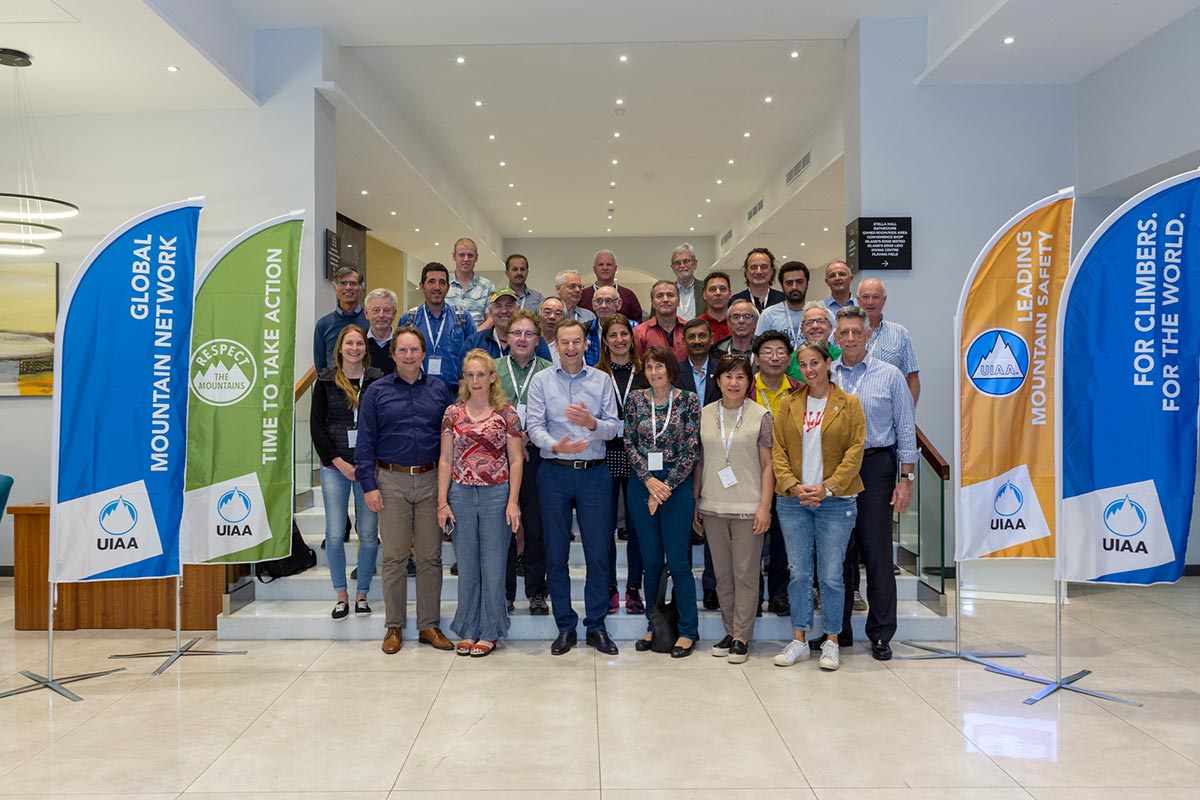 A REVIEW OF ALL UIAA SPRING MEETINGS IN MALTA

Expertly hosted by the Malta Climbing Club (MCC) in early May, the UIAA Spring Meetings provided an opportunity for close collaboration between various organs of the UIAA – notably Management Committee, Commissions, Office as well as representatives from member associations.

A number of UIAA Commissions have also recently held their meetings. MountCom met in Serbia in March (report here) and the Mountain Protection Commission in Azerbaijan in May (report coming soon).

The UIAA Management Committee meeting focused on the evolution of strategy discussions related to the future objectives and strategy of the UIAA. This includes a closer focus on the UIAA brand definition, identification of core strategic fields and a revised Commission structure. A number of these proposals, notably those related to organization, Articles of Association (AoA) and regulations will be subject to further discussions before being put forward to the General Assembly in November 2019 for approval.

The following topics were also discussed:

Please note Commission lists, verified by the UIAA MC in May 2019, will be updated on the UIAA website shortly.

The day before this meeting, the UIAA Management Committee decided to integrate the UIAA Access Commission as part of the Mountaineering Commission. Various members of the UIAA’s governing body attended the meeting alongside its full and corresponding members, notably Claude Eckhardt, UIAA Honorary Member and founder of the UIAA Access Commission, as well as Peter Muir, UIAA General Secretary. The main discussion in the afternoon revolved around the topic of the future work and capacity of Access within the Mountaineering Commission, but also the UIAA as a whole.

The morning was spent highlighting notable and various efforts of the Access Commission throughout this last year and ever since its last meeting in Canmore, Canada. The Commission referred to the effectiveness of the UIAA’s “soft power” through publishing news releases about ongoing initiatives and access issues in areas such as those recently documented in the Tatras and Grampians. Promoting open dialogue and involving all parties in discussions around responsible access was noted a primary goal. The leverage of an organisation such as the UIAA is not to be underestimated. In both cases, the Tatras and the Australian Grampians, dialogue and contact between several involved stakeholders was finally initiated, partially due to the attention the UIAA attracted to the issue. Nonetheless, the Commission agreed that greater due diligence and research on all incoming requests should be done before getting involved.

The MCC, the host of this meeting and youngest member of the UIAA, made a presentation regarding local issues around access and nature conservation. The floor was then open to guests from the International Slackline Association who explained what issues they are facing. Anne Arran, member of the MC, noted how valuable the know-how and expertise of the UIAA was for developing associations and national federations. The Access Commission, in its new framework and position within the UIAA, will continue to add value and influence in matters concerning restrictions to mountain access.

Ten members of the UIAA Ice Climbing Commission met for two productive days of meetings to review the past season and plan for the upcoming ice climbing events in 2020 and beyond. A review of the recent season can be found below.

Discussions focused on investigating the development of the future of ice climbing within the UIAA and a schedule of events for the 2020 season was confirmed. It will be made public following further dialogue with the event organisers. The Commission also met with all the other Commissions as well as the MC and UIAA Board which offered a great networking opportunity and made sure that ice climbing was forefront on the minds of the MC and UIAA board. Announcements on the 2020 calendar, rules and formats for the 2020 season will be published the coming months.

As is custom the UIAA Safety Commission meetings were divided into two parts: an internal session followed by a two-day plenary session.

The Commission also welcomed a new accredited test lab in 2019, Sports Labs Scotland UK, accredited for testing UIAA 161 Crash Pads, and is in the process of accrediting a new laboratory in Korea. The Commission has set the standards high in terms of goals for the next four years. Their goals include revising all 24 UIAA standards, and setting ten new UIAA standards, as well as devising a marketing campaign to encourage UIAA member associations to spread awareness among their membership about the importance of the UIAA Safety Label, what the UIAA Safety Label represents, the research and collaboration of global experts, manufacturers, and accredited laboratories who work together to make equipment safer for the climbing community. Please also refer to the recent article produced by the UIAA Safety Commission on recommendations for purchasing climbing gear.

Current Working Groups research includes helmet rim impact testing, where a maximum impact force of 8kN had been chosen, continuing research is needed with test helmets including foam models, and results will be taken from round robin tests at testing laboratories. SafeCom welcomed two guest presentations, one from the International Commission for Alpine Rescue (ICAR) and one from International Slackline Association (ISA). A close relationship is developing with ICAR with representatives of the UIAA and ICAR regularly attending each other’s meetings. ISA presented their activities and information on the types of equipment used in slacklining. Their organisation is structured in a similar fashion to the UIAA with a Safety Commission who meet annually. Their equipment has unique requirements which they are working on setting standards for.

UIAA 101 Dynamic Ropes has had some updates concerning improvements to the methods to measure a rope mid-point and length, it was also agreed that the optional water-repellent rope test should be carried out only by a UIAA approved lab.

The Safety Commission agrees that there are many important items used by climbers/mountaineers that are not really safety related or PPE (Personal Protective Equipment). SafeCom proposed that it would begin work on these products and start to produce dedicated UIAA Standards annually. New Working Groups were set for:

Important work of the UIAA concerning the ‘Alpin’ Magazine article regarding new VF EAS sets (April 2018) was presented. More detailed information concerning this will be released shortly on the UIAA website. However, the overall outcome of all the tests conducted by UIAA test laboratories showed that the new type of EAS sets did comply very closely to the new EN 958:2017 and UIAA 128.

Anchor corrosion is an important topic for all climbers, and a comprehensive update was given by SafeCom Vice President Lionel Kiener. He remarked that the problem was not confined just to stress corrosion cracking (SCC) but also ‘environmental degradation’. Phase one of the corrosion tests on sample anchors have been completed. Work has now been started on the second phase, which uses a purpose-built titanium test tank (paid for by UIAA) to subject samples to aggressive hot chemical salt tests. The bolt type test samples are mounted on granite blocks, to induce stresses. Complete anchors made of various materials are being tested. Information detailing this work was shown. When this test work is finalised, it should allow one to specify test procedures for the proposed five classes of anchor. This will help a user to select the correct class of anchor for a particular location.

Research is funded by the UIAA, and work is done voluntarily by experts, manufacturers and contributing laboratories who all continue to strive to ensure climbing and mountaineering gear meets the highest standards for safety and performance. The UIAA thanks its experts, manufacturers and laboratories for continuing to support the UIAA Safety Label and the work of this Commission. Without this, research would not be possible. Be sure to look for the UIAA Safety Label on your climbing and mountaineering gear to show that you support this research!

Further details on how to support the anchor corrosion project can be found here. A dedicated donate page will be launched shortly for organisations and members of the public to support SafeCom’s vital research.

The UIAA thanks the MCC, and in particular President Simon Alden, for their professional hosting of the event.

Event photos can be found here.