UIAA / UIAA  / Clean Climbing on Denali: The removal of all waste
In UIAA

Clean Climbing on Denali: The removal of all waste

CLEAN CLIMBING ON DENALI: The Removal of All Waste

Since 1975, Roger Robinson has strived to better educate mountaineers with the goal of leaving no waste on the mountain including human waste. This lifetime quest has slowly achieved very positive results. Denali in the 1970s was one of the most polluted mountains in North America and today its slopes are one of the cleanest. Denali has set an example of what can be achieved with good education and committed: Denali Rangers, mountain guides and climbing organizations. Robinson has championed this quest through persistence of Clean Climbing and Leave No Trace principles. Finally in 2017, climbers have been motivated to fully pack out all their human waste. A third of all climbers have volunteered to attempt this challenging endeavor. The final page of this life long quest is finally becoming reality.

Robinson has been a member of the American Alpine Club since 1975 and is employed by Denali National Park as a Mountaineering Ranger since 1980. 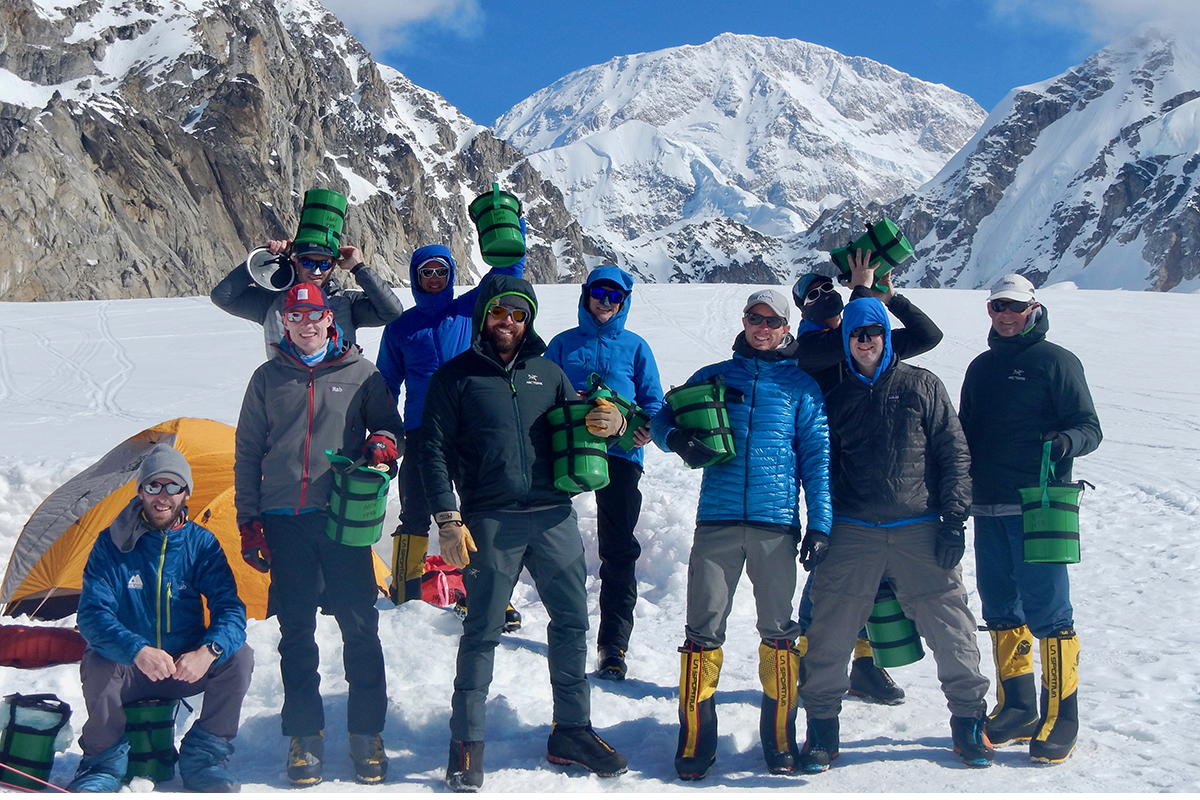 In 2001, Robinson developed the Clean Mountain Can (CMC) for Denali climbers as a lightweight portable toilet. The first several hundred CMC’s were purchased through grants from the American Alpine Club and Access Fund. Almost immediately the CMCs became popular and very practical for this three week climb. By 2007, the pit toilets were removed and all climbers were required to pack down their waste from the 17,200-foot high camp, while still allowing waste to be crevassed at the 14,000-foot level and below. Once there was better control of the waste management the park service saw a significant drop in gastrointestinal illness of climbers.

While the Clean Mountain Can program has been extremely successful, there have been concerned that waste was still allowed to be crevassed. What was happening to this waste that was buried in the glaciers or deposited in crevasses? Up to this year, 2017, nearly 90% of climbers waste was still thrown in crevasses, averaging 9,000 pounds a year.

With this concern of the remaining waste in mind, ten years ago the National Park Service began research on what was happening to 5 decades of waste that was slowly moving down the huge Kahiltna Glacier. The assumption was that the glacier ice would pulverize this excrement along with the plastic bags, making this the perfect solution to this hazardous problem. There was thought it would take thousands of years for the supposedly indistinguishable debris to eventually surface. Imagine our surprise when the research showed that nothing breaks down in the ice or high on Denali’s surface. Even waste left by the pioneer climbers is preserved in a frozen time capsule. Research found that in some areas the mighty glaciers are flowing nearly 3 feet a day downhill. Five years of water sampling from the small creeks flowing off the end of the Kahiltna Glacier, is over 30 miles from the Denali basecamp, are producing active E.coli (fecal contamination). Our best explanation is that water within the glacier is flowing through old climbers waste and polluting these streams. The research indicates that climbers waste could be surfacing soon below the large Kahiltna ice fall next to Mount Hunter. The estimate was wrong that it would take thousands of years for this waste to surface. The problem is here now and will be with us for a very long time.

With the climbing season winding down over one third of the approximately 1200 climbers this season volunteered to give this a try. At least 12 nationalities and 24 guided parties (nearly half) decided to tackle this problem. Several tons of human waste was removed which would have been left behind. Denali staff collected feedback on the pack-outs from returning climbers. With the widespread participation from both big teams and small ones, an array of excellent ideas have been shared on efficient caching strategies, storage/transportation, as well as other words of support for the program. This feedback will help Denali implement a future waste management program.

Robinson’s quest has lead to finding the best solutions to waste management and the best sustainable practices for high mountains. He has collaborated with mountaineers from around the world through a series of conferences called Sustainable Summits. The conferences involved participants from around the world and many of the take home education have been relevant for mountain indigenous communities whether in the Himalaya, the Andes or the Maori of New Zealand. An example: in New Zealand at Tongariro National Park in 2016, Robinson gave a presentation about clean climbing efforts on Denali along with possible solutions for managing human waste on the Tongariro crossing. A significant outcome was getting three of the four major Iwi (Moari) of the Central North Island region into the same room and engaging with the subject of human waste (something they have been reluctant to do in the past) This collaborative effort resulted in real positive solutions for the Moari and future management of Tongariro National Park. 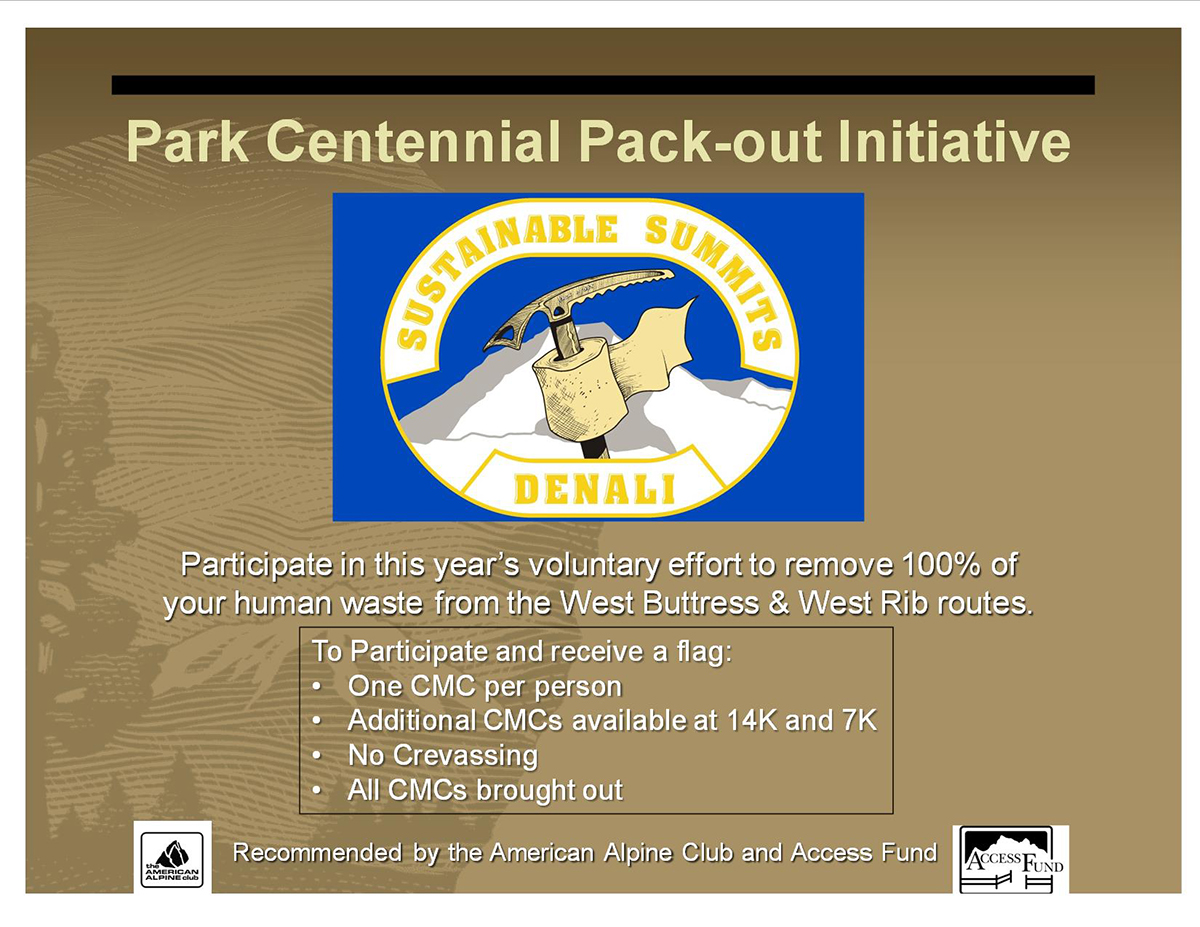 This year was a milestone for Denali and the next big effort should aim at mountains such as Mount Kilimanjaro, Mount Aconcagua and Mount Everest. The mountain managers of these mountains are watching what is happening with Denali and the next big effort should be assisting these mountain areas that are incorporated within national parks. Robinson has been slowly educating these parks on Clean Climbing practices and the next hurdle is a greater collaboration with managers developing working solutions. These efforts will need additional volunteer champions at each respective park. An actual timeline would be difficult to project but the sooner education begins, the sooner successes are achieved. Robinson would like the managers of these areas to attend the next Sustainable Summits conference in Chamonix.

Roger’s first efforts on Denali in the 1970s were volunteer clean-up climbs. For over 40 years he has continued these efforts to the present with the Sustainable Summits Initiative. Roger has always felt that volunteering is the best way to achieve the greatest successes whether in mountain stewardship or educating Clean Climb and Leave No Trace principles. Roger’s push for the voluntary pack-out of all human waste is a great example of these efforts and what can be achieved years from now. The special Sustainable Summits flags were given to each participant in 2017 and this simple thank you was a terrific way to show appreciation at keeping the mountain clean. Half of all the guided parties participated in the voluntary pack out.