Eco Everest Expeditions was started in 2008 and is led every year by Dawa Steven Sherpa, managing director of Asian Trekking. This initiative promotes an eco-friendly way to deal with the challenge of climbing Mt. Everest by raising awareness about the consequences of human impact on this fragile environment and the way global climate instability impacts the Himalaya.

The project encourages both local people and international expedition members about the need to reduce waste and encourage energy efficient practices. It also raises awareness among the global mountaineering community about the need to preserve mountain summits.

The main activity involves the removal of trash from Mount Everest. Staff training and client briefings are conducted before the expedition departs from Kathmandu. The expedition leader personally invites climbers at base camp to contribute and engages team members to spread the word. The cleaning program has been given the catchy term “CASH FOR TRASH”. Every day at 4pm, a “Weighing and the Paying” is conducted. Any climbers who have collected trash can come to the Eco Everest Expedition base camp, have their rubbish weighed on scale and collector details are recorded. After this, they are paid 100 rupees ($1) for each kilo of garbage. The collected garbage is then sorted out for recycling and repacked. Eco Everest Expedition engages people who are already on the mountain, therefore no extra expenses are incurred. This results in high efficiency at a relative inexpensive cost.

During these expeditions, alternative products environmentally friendly are proposed: toilet bags to limit human waste, as well as solar cookers and panels to reduce the dependency on fossil fuels and other polluting energy sources.

A new way to organize environmentally sustainable expeditions is promoted by with photos of climbers on the summit of Mt. Everest holding banners with the message:Stop Climate Change, Let the Himalayas Live!”. World record holder Apa Sherpa who has climbed the mountain 21 times joined the initiative in 2011 and made it a habit to take pictures with the banner to get the message out with these pictures which were then used by the press and media when they reported on the climbs. This ensured that the message of protecting our mountains travels to all corners of the globe. 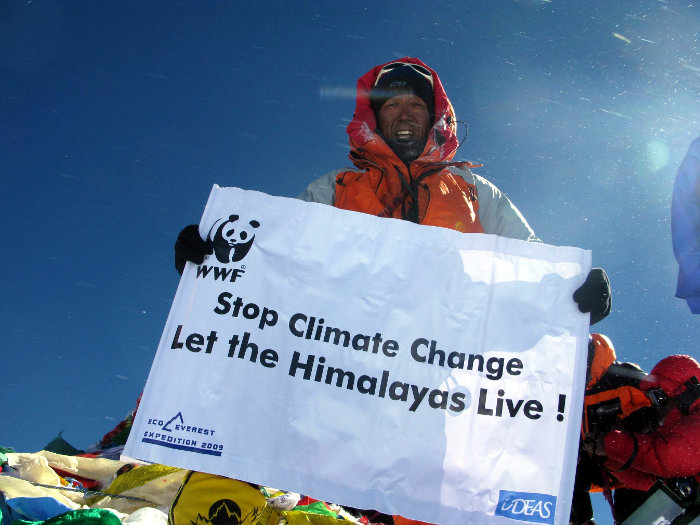 WHAT ABOUT THE TRASH COLLECTED?

The trash is sorted with the non-recyclable material stored currently in the town of Khumjung. There are plans to turn this into artwork to raise visitor awareness on their impact on the Himalayas and the environment in general.

In 2014, the project will extend to two other regions. An Eco Everest Expedition will be organised in the Spring season while another Eco Manaslu Expedition and Eco Amadablam Expedition will take place in the autumn. After Mt. Everest, Mt. Amadablam and Mt. Manaslu are the two most popular expedition peaks and with more climbers visiting these peaks, more effort is needed to keep those mountains clean. Clients can participate or use their experiences in their home countries to share the expeditions’ vision and ideas. In the past, some clients have also chosen to fund raise for the Eco Everest Expedition, thereby maintaining their connection with our work.

We use the fees our clients pay for the expedition to cover the expenses for the cleanup and to run the program smoothly. The clients get immense satisfaction in knowing that their personal expedition to climb Mt. Everest had directly contributed to cleaning the mountain. Being part of a cleaning expedition and actively participating in an eco-sensitive expedition, they become ambassadors for environmental protection and encourage others also to organise their expeditions in the same way. Being part of a well-organised and professional team who know that mountain extremely well also increases the chance for a client to fulfill their primary goal, to summit Mount Everest.

Most of the Sherpas who partake in the cleaning efforts on the Eco Everest Expeditions are from the local area. This activity is an additional way for them to get extra income. Furthermore, being active participants of the clean up campaign, their own awareness has risen about the need for environmental protection. So too has their sense of entitlement to demand others to do the same. Sherpas have taken these same values and ideas back home to their villages after the expedition and show increasing concern for protecting the environment. One clear example is the increasing number of households and lodges in the Everest region that now use solar cookers. Before the first Eco Everest Expedition in 2008, there was only one solar cooker in the entire Everest region above Namche Bazaar; at the “Tengboche Eco Centre.” 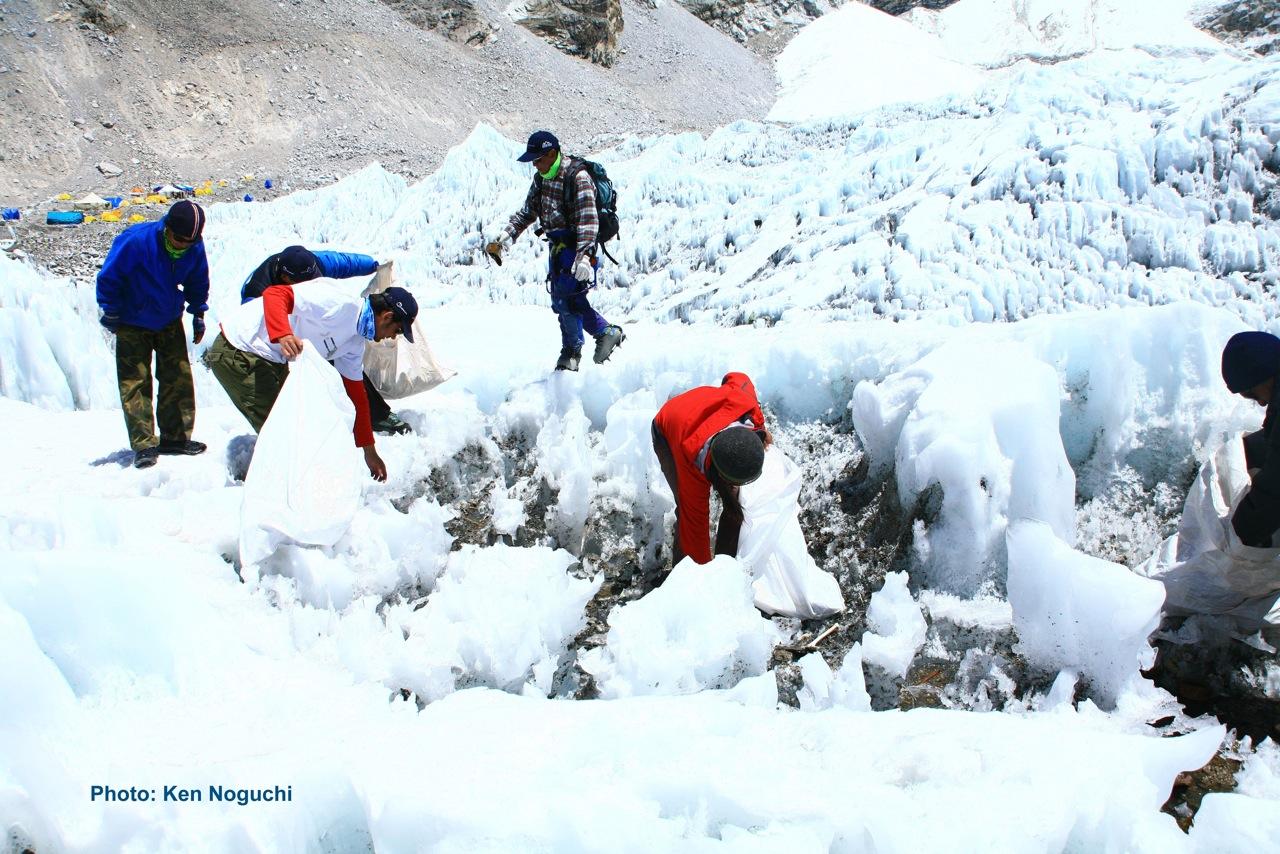 The Government of Nepal and local organisations have very limited funds to carry out cleaning projects and educational campaigns. As such, work done by the Eco Everest Expedition has greatly reduced the burden placed on them. The local non-governmental organisation in charge of keeping the Mt. Everest region clean, the Sagarmatha Pollution Control Committee recognised our efforts and awarded us a certificate of gratitude.

It is clear to see that Mt. Everest has become cleaner over the years that the Eco Everest Expedition has been in operation. Other expeditions are now also following an environmentally sensitive approach and have adopted the use toilet bags and increased participation in the clean up efforts. We hope others will understand and join.

Promoting this project through the Mountain Protection Award process will enable communities in other regions of the mountain world to see a great example of how eco-tourism operators can serve as catalyzers and leaders in bringing together all mountain stakeholders together to develop, test, demonstrate, adopt and promote effective sustainable mountain tourism.