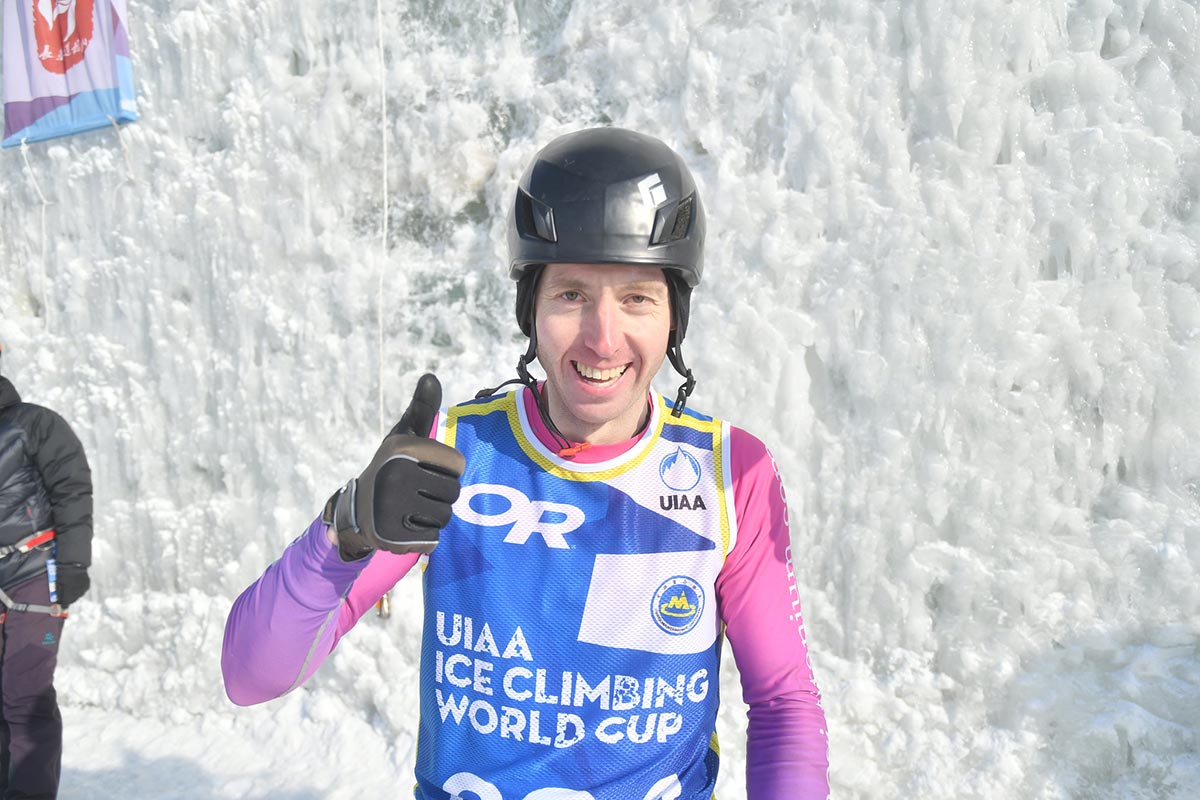 ICE CLIMBING: EXPERIENCE TO THE FORE IN CHEONGSONG

If the opening round of the 2020 UIAA Ice Climbing World Cup season, partnered by Outdoor Research, heralded the rise of a new generation, round 2 of the season witnessed some emphatic statements by athletes who have dominated the World Tour throughout recent seasons. Experience was key. Three of last year’s winners in South Korea returned to triumph again. It was also a terrific weekend for Russia who took all four gold medals. Two Swiss athletes joined them on the podium. Exactly one hundred athletes graced the stage in Cheongsong.

Across the two World Cups to date – both held in Asia – only Anton Nemov (men’s speed) has won both events. It ensures that the season decider in Saas-Fee, Switzerland in two weekends time is finely poised. Saas-Fee with its unique venue and atmosphere, can often reserve surprises.

Men’s lead: Louna Ladevant of France became the youngest ever winner of a lead World Cup gold medal last weekend. In Cheongsong, he experienced the other side of the sport, falling early in his semi-final climb on a section of the route which proved testing for a number of athletes. While Ladevant failed to make the final eight, an opportunity opened up for another athlete to take a 2020 World Cup gold medal. Last year’s winner in Cheongsong, Nikolai Kuzovlev, had been rather fortunate to qualify for the final. He more than made amends when presented with the opportunity. As first athlete to climb he posted a height which six of his rivals failed to match. It was left to Maxim Tomilov, the most successful male athlete in the World Tour’s history (see recent profile), to try and surpass the 13th hold. This he did with seconds to spare. A returning Yannick Glatthard, Switzerland, sealed bronze.

Women’s lead: Woonseon Shin’s gold medal in Changchun City put pressure on her perennial rival Maria Tolokonina heading into Shin’s home World Cup. In similar fashion to the men’s competition, it came down to mere seconds and centimetres as Tolokonina, like Tomilov, reached the 14th hold as last athlete to climb, to take gold. The Russian had in truth dominated the weekend, leading throughout the competition. It sets up an amazing finale in Saas-Fee as whoever finishes higher will take the World Tour title. Switzerland’s Sina Goetz turned her fourth place in Changchun, and indeed in South Korea last year, into bronze medal success.

Men’s speed: Anton Nemov has been the best speed climber on the World Tour circuit for the last few years and he again reserved his fastest ascent of the wall (6.08 seconds) for the final. In fact the last duel of the weekend between Nemov and Kuzovlev – gold and silver medallists in Cheongsong last year – was pure quality. Kuzovlev took the first climb, Nemov the second with just .12 of a second separating the two. Nikika Glazyrin claimed bronze defeating Kherlen Nyamdoo, who finished fourth for the second weekend in a row but confirms the vast improvement and ascendancy of the Mongolian ice climbing team. The UIAA thanks the Korean Alpine Federation (KAF) for its outstanding hosting of the event. The final round – Saas-Fee – will be held from 23-25 January. An event preview will be published on 20 January. To discover more about the World Cup in Saas-Fee click here.