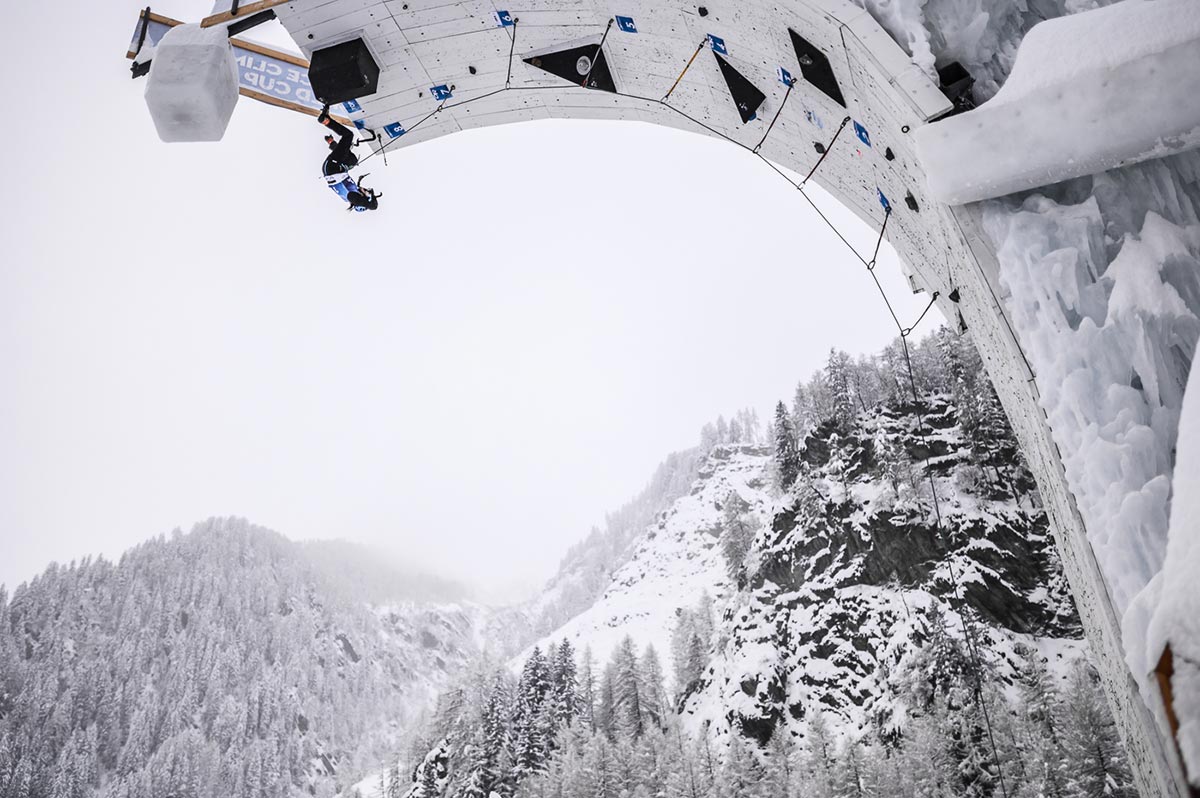 Rabenstein, Italy hosted the fourth round of the UIAA Ice Climbing World Tour on the weekend of 2-3 February. Piercing temperatures and a huge snowfall in the days leading up the competition added to the atmosphere of an always unique event. Round 4 of the season witnessed some mesmerising contests with athletes from a wide spectrum of nations represented in the Finals. In three of the four events, the World Tour leaders claimed gold to extend their leads going into next weekend’s competition in Champagny-en-Vanoise. A two-week break follows before Denver, United States hosts the season finale from 22-24 February. The 2019 UIAA Ice Climbing World Tour is partnered by Outdoor Research. Nemov wins in Rabenstein for the second year in a row and claims his third gold medal in four World Cup events. Having lost the first duel in his final against Anton Sukharev, Nemov recovered on the second climb to win by nearly a second. Nikolai Kuzovlev claimed his third bronze medal of the season in defeating Vladimir Kartashev. Nemov (355 points) extends his lead in the overall standings ahead of second place Vladislav Iurlov (296), who this weekend came fifth.

Illness ruled out Feoktistova in Saas-Fee last weekend and the time off from competition seemed to recharge her energy levels. In the women’s final she took advantage of a first climb slip from favourite Valeriia Bogdan – the fastest on the speed wall throughout the competition – to ease to gold. World Tour leader Ekaterina Koshcheeva claimed a fourth straight medal winning the bronze medal climb against Maria Tolokonina. The left-hand side of the speed wall claimed a number of victims throughout the competition with several athletes falling at a point about a third of the way up the structure. Koshcheeva (325) leads the overall standings ahead of Tolokonina (275).

Topping the route the fastest, Nikolai Kuzovlev (5:48) won the Lead Final, claiming a third gold medal in four World Cups. The two other athletes to complete the route – Heeyong Park (6:13) and Nathan Clair (6:21) claimed silver and bronze. Kuzovlev continues to produce performances of immense quality and consistency. Regularly finishing on the podium in the speed finals, he has never finished lower than second in the lead competition. Last weekend defeated by Yannick Glatthard in Saas-Fee, he produced a masterclass on the Rabenstein wall to deny Park a first gold medal since he won the World Championships in 2017. That victory was in Champagny and with next weekend’s meeting taking place on the fabled French ice tower, perhaps Park is returning to form at the right time. Gold medal winner last weekend, Glatthard finished a creditable fifth this time around while Louna Ladevant, Clair’s French teammate, finished an excellent fourth.

Like Kuzovlev, Maria Tolokonina returned to the top of the podium to take a third gold medal following a disappointing weekend by her own high standards in Saas-Fee. She climbed higher than her two closest challenges Woonseon Shin (silver) and Hannarai Song (bronze). No female athlete was able to top the Rabenstein route in the Final in a competition which got off to an inauspicious start with Enni Bertling (fifth overall), Olga Kosek and Vivien Labraille all experiencing difficulties at a similar point early in their climbs. Tolokonina leads the competition (340) with Shin (284) her closest and now most likely challenger for supremacy. Next weekend may prove decisive.

The UIAA thanks all organisers and partners for helping stage another excellent World Cup in Rabenstein.

Next weekend, the penultimate round of the World Tour heads to Champagny-en-Vanoise, France from 7-9 February. The event programme can be found here.

All Results including Overall Standings