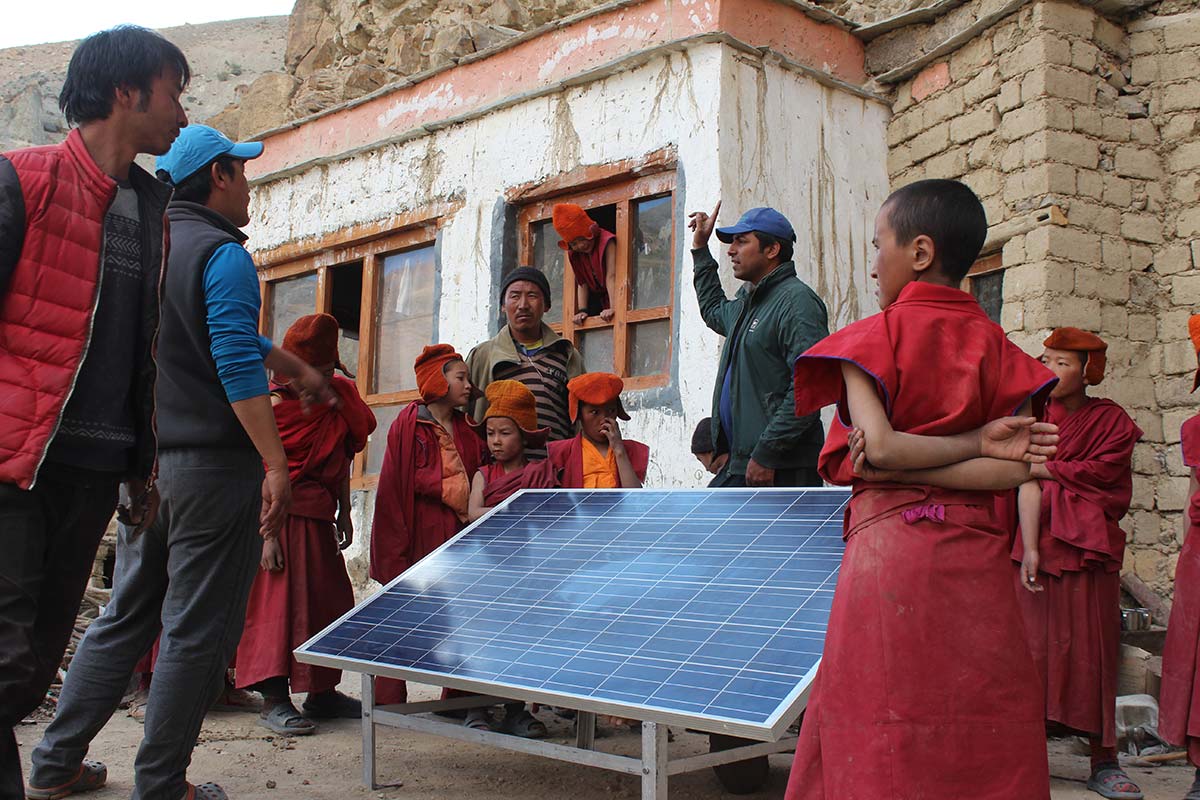 The project Global Himalayan Expedition aims to empower the remotest communities on the planet by leveraging adventure tourism as a driving force for development. The project revolves around conducting ‘Impact Electrification Expeditions’ that encourage visitors from diverse backgrounds and different countries to come together to bring solar energy to the remote unelectrified villages in the Indian Himalayas. The capital cost for the solar grids is paid for by the tourists as part of their expedition fee.

Global Himalayan Expedition (GHE) is a social enterprise that leverages technology and adventure tourism to bring clean energy access, livelihood generation and digital education access for remote Himalayan communities. GHE has been recognised by United Nation (UNFCCC) in 2020 as the first in kind tourism organisation that conducts Climate Positive Traveller Expeditions. The project revolves around conducting Impact Electrification Expeditions that involves tourists from diverse backgrounds and different countries to come together to bring solar energy to the remote unelectrified villages in the Indian Himalayas. The capital cost for the Solar grids is paid for by the visitors as part of their expedition fee.

The vision is to empower the remotest communities on the earth by leveraging adventure tourism as a driving force for development. GHE is moving towards this vision by bringing clean energy infrastructure for basic needs, upgrading the infrastructure for quality education, and developing sustainable livelihood for the communities within their villages. The impact intervention begins with the objective of setting up clean energy infrastructure for electricity and daily energy needs of a household. In the Hindu-Kush Himalayas, more than 16 million people still rely heavily on kerosene lamps and diesel generators for their energy needs. These kerosene lamps cause heavy emission of toxic fumes and harmful to one’s health.

GHE’s Electrification Expeditions are based on removal of these dangerous fumes arising through burning of fossil fuels that are emitted out from the Kerosene oil Lamps, by installing clean source of energy for the electrification of the village. By conducting these expeditions, GHE installs the solar system in each house of the village with the help of expedition members. This becomes a win-win situation for both the travellers and the community, as the community gets clean source of electricity and travellers gets an experience of lifetime. These expeditions have created an everlasting impact on the communities and at the same time have been a life changing experience for the participants. More than 150 villages in the remote Indian Himalayas now have access to clean and renewable energy which has directly impacted the lives of 100,000 people in the Himalayas. In the process 1,300 visitors from 60 different countries have been part of the impact adventures. Through solar energy, the project has displaced 35,000 tonnes of CO2 emissions till date and at the same time enabled the cultural and environmental preservation of the fragile mountain ecosystems.

The villages where GHE operates cannot be found on google maps. These villages are sometimes located at trek distances of 3-5 days from the nearest road. The overall modus operandi of execution is divided into three key steps:

1. Survey and Mobilisation: The team first conducts a detailed survey of the route map and the village needs. It is important to have a pull and a need from the community for the Solar Grids. Having reached the village, the team then mobilises the local villagers to understand their current energy needs. Community Mobilisation also involves the formation of a village development committee that will undertake the task of maintaining the grid and help set-up the village joint bank account, where the monthly proceeds for the maintenance and upkeep of the grids will be deposited by each household. The community must also be willing to host expedition members as part of the electrification expedition coming to electrify their village.

2. Promoting the Electrification Expeditions: Once the agreement with the community is made, the next step is to create an expedition itinerary that involves the three elements of Adventure, Impact and Empower. The expeditions are promoted online and through our network of past GHE expedition participants (GHE Alumni) with 1,300 changemakers in 60 different countries. Each participant that applies to be part of these expeditions in the Himalayas goes through a selection process and an interview before their seat is confirmed on the trip. The vision is to bring in groups of people that are responsible and care about sustainability and the environment. Participants are made aware of the mission and the fact that the expedition costs also include the cost of the Solar Electrification of the village. We have seen some of the participants self-fund or some even setup crowdfunding campaigns to raise awareness and to mobilise support for their mission.

3. Executing the Electrification Expedition: Each expedition takes anywhere between 9 days to 14 days in the Himalayas. The expeditions begin with acclimatisation and cultural awareness of the Ladakh region, as the participants get to know each other in the initial days. They also get a chance to meet the local changemakers of GHE, including our Women Solar Engineers, who are the first in the region to take up engineering as an occupation. The team then goes through multiple adventure activities such as mountain biking and rafting, before proceeding to trek to the village to bring solar electricity. Once in the village, the participants are given a crash-course on setting up Solar Grids, and in partnership with the local community and the GHE Engineers, the participants are able to electrify the entire village in just 2-3 days. On the final day, the lights are switched on and there is a celebration with the community. Each expedition participant is able to see the impact that they made on the communities while being able to accomplish their dream of trekking in the Himalayas. 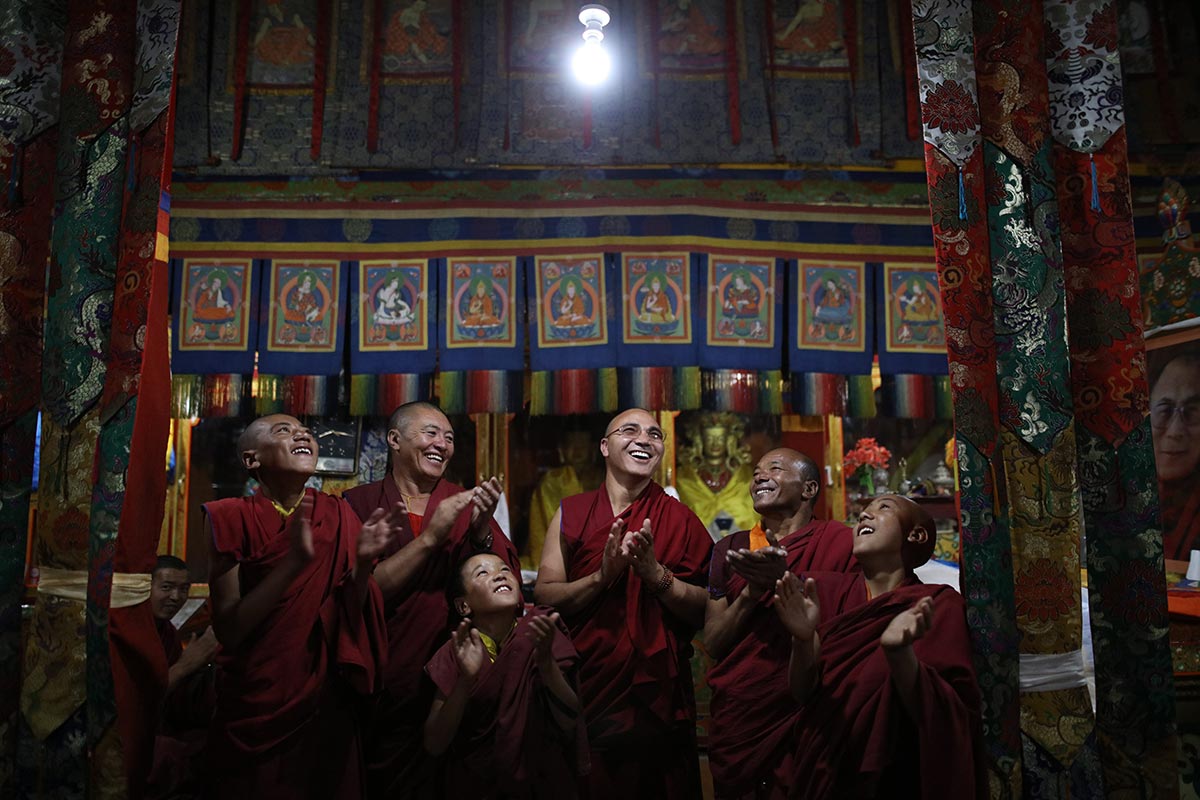 GHE is currently working in the Ladakh and Zanskar region of India, with some of the remotest indigenous communities. It is one of the most sparsely populated regions in India, located at an altitude ranging between 2900m and 5900m. This makes it one of the most elevated and coldest inhabited regions of the world. The winter temperatures drop to as low as -30 Deg C., with most areas becoming inaccessible due to heavy snowfall. The villages where GHE provides energy and education access are the remotest villages of the region. Every village is approached by a dirt road and once the road ends, the team has to trek 3-5 days crossing mountains passes at 17000 feet and sometimes trekking over frozen glacial water streams to reach the destinations. Travellers who are interested in mountaineering, outdoor activities and climbing. find the idea of trekking to these villages for the purpose of electrification as meaningful and provides them with a sense of purpose. The electrification expedition travellers are usually the first ever travellers that arrive in these villages. Like explorers, these participants are open to new experiences that mountains and its culture have to offer. Travellers experienced in mountaineering, climbing and outdoor activities usually get selected due to their understanding of the mountain terrain and challenges of vulnerable communities living there.

Regular Mountaineers/Trekkers – Once these villages are electrified, GHE develops homestays and sustainable tourism experience in these communities to bring them on the tourism map. The adventure seekers start taking these remote and offbeat trails to try different trekking routes. With the help of locals, our team develops more (easy, moderate, difficult) circuits/routes to enhance the experience of offbeat travel seekers. These new trekking routes are promoted online and on various other B2B platforms. Such new trails go through the villages where these homestays are set up. GHE identifies travellers segments for these homestays and designs its promotional activities accordingly. From the trailblazers joining the Impact Expeditions to the general travellers in the homestays, GHE’s activities revolve around mountaineers, outdoor sports enthusiasts/experts. They become a strong backbone to create tangible impact in these remote villages.

GHE’s work gets divided in two types of travellers. The first type is the mountaineering enthusiasts – explorers who join our Electrification Expeditions to electrify remote off-grid villages through setting up of solar microgrids. The other segment of travellers are the general enthusiasts who are looking forward to Homestay based tourism experiences with the communities. Both types of travellers create direct and indirect ecological as well as positive socio-economic impact on these indigenous communities. These travellers are the main fuel for our business to ensure the sustainability of our operations.

In the Electrification Expeditions, the participants are purpose-driven to provide electricity to the remote villages where they undertake multiple days, high altitude treks, crossing mountain passes over 17000ft sometimes to reach these remote villages. Due to this mission-driven approach, we create meaningful partnerships with potential travellers as well as organisations. As a result of this, we have formed a movement of change-makers across the globe. The project organisers keep each of our travellers informed about the progress in the villages, share the new regions GHE has ventured into, and encourage the dialogue to bolster its empowerment initiatives.

The homestays that are set up in the local houses of these solar electrified villages are equipped with Solar Water Heaters to ensure hot water service without burning wood, Eco-Dry Toilets to ensure the village does not need heavy energy consuming water treatment plants, Water Filters to cut-down single use plastic bottles, paper wrapped soaps and amenities to ensure no plastic is generated while hosting. Hence, when a travellers stay in one of these homestays they end up following the rules of sustainability without even realising them. The conscious set up modifies their travelling behaviour into sustainable behaviour. These trekkers coming and staying in the homestays leave back only positive footprints in the form of direct economic benefit to the local community. They do not leave behind carbon and plastic footprints.

GHE’s approach to empower remote communities is through being action-oriented. We inculcate this approach in our Impact Expedition by guiding the participants about what direct actions they can take to empower mountain communities. We also bring this action-oriented approach in our Mountain Homestays by setting up such an infrastructure where all future tourists using this service will indirectly take actions towards not harming the local ecology.