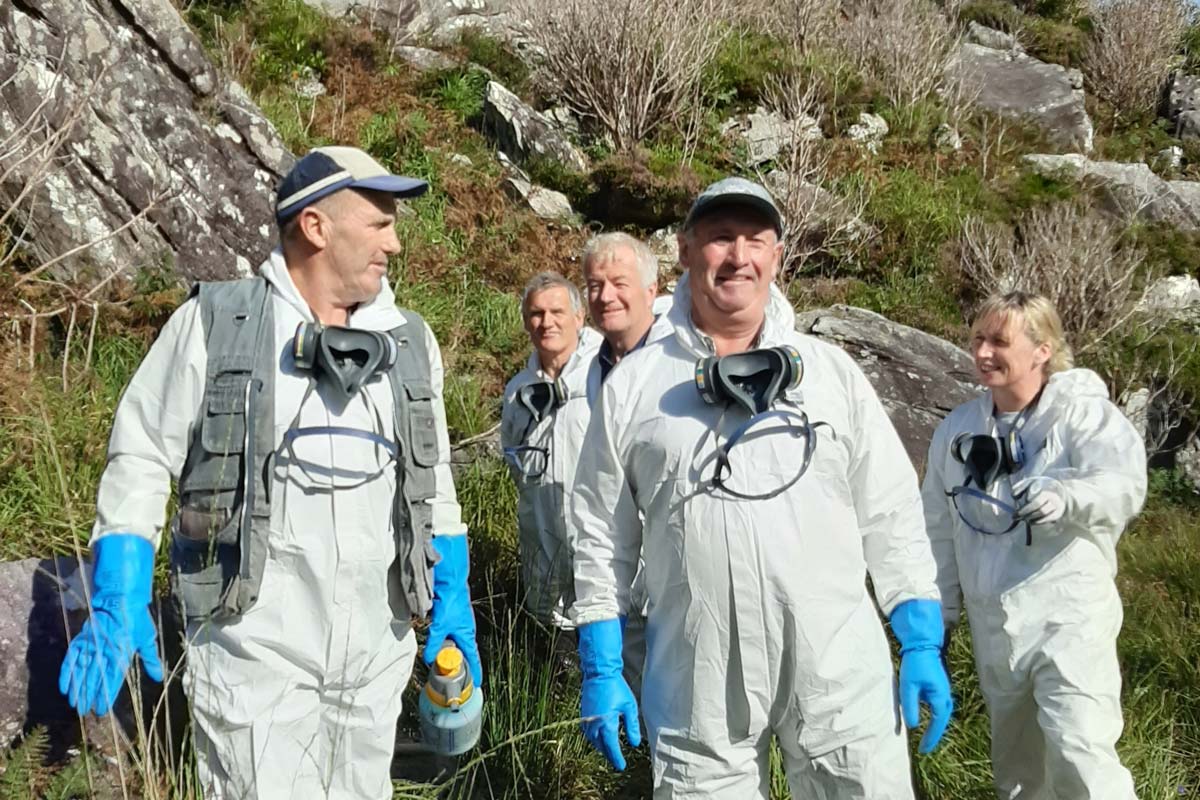 The MacGillycuddy Reeks is one of Ireland’s leading outdoor recreational destinations and the area is under 100% private ownership. The MacGillycuddy Reeks Mountain Access Forum is based on a shared vision among landowners, community, recreational users, enterprise and public partners. It provides for a long term socio-economic framework for the sustainable development of the catchment, centred on the environmental conservation of the Reeks Special Area of Conservation and proposed Natural Heritage Area.

The MacGillycuddy Reeks Mountain Access Project (MAP) covering ca. 100km2 was the largest of two national pilot schemes, initiated by Comhairle na Tuaithe (The Countryside Council) in 2013, to identify a sustainable model for the management of recreational access in the Irish upland environment, based on permissive access to privately owned lands, with the collaboration of the landowners/farmers. The MacGillycuddy Reeks is one of Ireland’s leading outdoor recreational destinations, and the area is under 100% private ownership. Unlike many British and European countries, Ireland does not have a dedicated network of publicly owned upland paths, and all recreational access to the uplands in Ireland, including in publicly owned lands such as national parks and forests, is dependent on permissive access and goodwill of landowners/ land managers.

The Reeks MAP proposal followed two years of pre-development work by SKDP, in conjunction with the Dept. of Environment, Community & Local Government. A feasibility study of the MacGillycuddy Reeks MAP, based on extensive consultations, was conducted on in 2013-14. The study included the development of a draft five-year Strategic Plan (2014-2018), with recommendations for the future management structure and implementation of the scheme. The implementation of the Reeks MAP saw the establishment in May 2014 of a 21-person representative management forum, the Reeks Mountain Access Forum. The MacGillycuddy Reeks Mountain Forum is based on a shared vision among landowners, community, recreational users, enterprise and the public partners. It provides for a long term socio-economic framework for the sustainable development of the catchment, centered on the environmental conservation of the Reeks Special Area of Conservation (SAC) and proposed Natural Heritage Area (pNHA), thus protection of the core asset.

The shared vision of the Reeks Mountain Forum members is to create an environmentally sustainable upland zone for agricultural, recreational, educational and research activities, including hillwalking, climbing, mountaineering, environmental and cultural heritage, underpinned by permissive access of the relevant private landowners. The Reeks EIP Project arose from the work of the Forum, and is a four year locally led agri-environmental project, funded by the Dept. of Agriculture, Food & the Marine as part of Ireland’s Rural Development Programme 2014-2020.

The MacGillycuddy Reeks is Ireland’s highest mountain range, and it is part of a Special Area of Conservation (SAC) which is a European designation for sites that support rare and threatened habitats and species. The Reeks contains protected habitats such as the heath and blanket bog (Ireland has 8% of the world’s blanket bog), and rare species such as the Kerry spotted slug, (Geomalachus maculosus) and the Killarney fern (Tichomanes speciosum). Despite the steep mountainous terrain and ever-changing weather conditions, the Reeks are actively farmed. In more recent times, sheep farming has come to dominate the area; but in the past summer cattle grazing would have been a common sight across the landscape with people (often young women) moving up to higher ground with the cattle for the summer. Here, they milked the cattle, made cheese and stayed in small stone shelters.

Farmers in the Reeks not only produce food, they also play an important role in managing the landscape. Grazing is essential for the management of the heath and bog habitats and for all the wildlife they support. Healthy peatland habitats are important sinks for storing carbon. Today, as is true of many places, the rural population is in decline. The farming cohort is ageing with fewer young farmers in the wings to take over. Now more than ever, with the continual pressures on national and global biodiversity and the adverse impacts of climate change, it is important that farmers are supported to continue managing our uplands in a sustainable manner which protects our native wildlife and maintains the carbon storing function of these habitats.

The EIP project team, who are based in Beaufort, have been working with farmers in the area over the last two years to tackle issues such as the spread of bracken (Pteridium aquilinum) and rhododendron (Rhododendron ponticum) and to develop sustainable grazing regimes which allow the heath and bog habitats to thrive. Assistance is given for maintaining existing tracks which are essential for supporting farmers in their daily activities and for managing the erosion that can be caused by recreational users.

The project undertakes annual habitat assessment between May and September each year to monitor the condition of habitats in the Reeks. Each site is given a score based on the assessment and participating farmers receive a payment linked to the score, thereby incentivising participants to take appropriate actions to improve the habitat condition. The assessment considers the ecological integrity of the habitats including factors such as the diversity of species, the percentage cover of mosses and lichens, the condition and height of the vegetation and the level of grazing. Existing pressures and threats to these habitats such as the invasion of bracken and rhododendron are also assessed.

The MacGillycuddy Reeks EIP Project Team assists farmers in identifying actions which can be carried out to improve the habitat score on their land and find practical and innovative ways to carry out the work.

The EIP project has two supporting actions which have a mountaineering focus:

1) the landowner ranger initiative and;

The landowner ranger initiative allows for farmers who own the land interact and share their knowledge of the landscape, history, culture and traditions with visiting recreational users. They assist in providing advice to visitors on changing weather patterns (extreme and quick changes in weather due to the location near the west coast of Ireland), route selection, the principles of Leave No Trace encouraging people to bring back all waste including organic waste, staying on existing tracks, farming traditions, ecology, suitable attire for the mountains and why dogs can be an issue on open mountain sides where livestock at present. This is particularly important for people who are visiting the mountains for the first time. The rangers gather data from visitors through the use of a survey app, which allows the project to investigate where improvements can made, visitor perceptions on importance of ecology, land ownership etc.

The trail maintenance and definition works are extremely important to ensure walkers and climbers are encouraged to use these paths. With over 220,000 visitors in 2018, and climate change causing wetter winters and drier summers maintenance of these upland trails is critical. It is very challenging to secure funding for maintenance works, and the EIP Project recognised the need to carry this work out to prevent further loss of vegetation and damage to the sensitive habitats in this mountain range.

The Mountain Access Forum encourages responsible access by requesting walking groups/clubs/commercial events/charity events submit Group Registration Forms in advance of their planned trip to the MacGillycuddy Reeks. This allows the project to manage the capacity of the three car parks, engage with the landowners in advance and mitigate against overuse of the same trail on a given day. All visitors to the MacGillycuddy Reeks are encouraged to become a ‘Friend of the Reeks’, whereby they can make a small contribution towards the path restoration and maintenance works that need to be carried out. In return they will receive a Friends of the Reeks car sticker, regular newsletter updates and the use of the annual Friends of the Reeks badge on their promotional material.

Both the EIP project and the Mountain Access Forum comprise of a very small team (the EIP has 1 full time project manager, a part-time ecologist and a part-time administrator, the Reeks Forum members are all voluntary), working in an area of over 10,000ha with over 130 private landowners and farmers. Both projects endeavour to share information with all interested parties throughout the world on our learnings from the projects. We always facilitate requests for study & site visits from students and from groups who wish to learn more about the path restoration techniques we use. In 2018 we were the first in Ireland to deliver The Scottish Vocational Qualification training and certification in Environmental Conservation Level 2 to six local participants in conjunction with the Outdoor Access Trust for Scotland in order to build capacity of local people to carry out the required works in upland sensitive areas.

The organisation works hard to engage with and provide outreach to young people, through visits to primary and post primary schools who it hopes will want to live and work in this area in the future. Engaging with, and maintaining agreement with all interested stakeholders for a large area such as the MacGillycuddy Reeks is hugely challenging. It relies on trust and working hard to maintain strong relationships with a range of people from state agencies responsible for the protection of Natura 2000 sites, private landowners and farmers, recreational users, commercial guides, community groups and local businesses. This requires being available around the clock and trying to manage and meet a range of expectations. Developing systems to protect the landscape which are agreeable to all (landowners, users, state agencies) while managing and sustainably developing the region is beyond what most other upland areas in private ownership could ever hope to do.