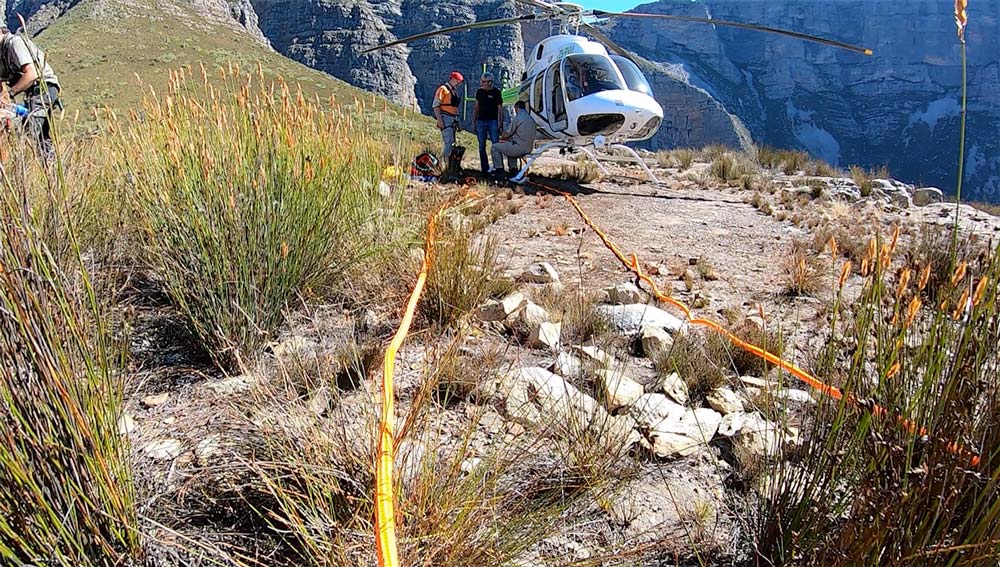 The vision of the Helihack project is to restore biodiversity by eradicating invasive alien vegetation in inaccessible mountain catchments in the Western Cape. Two strategies, both involving helicopters, are implemented to kill invasive alien plants that both threaten biodiversity in the Cape Floristic Kingdom and reduce water yields. Experienced rock climbers who are also chain saw operators are transported to remote catchments to fell Pines (Pinus pinaster) and biocontrol is shot at Silky hakea (Hakea sericea). Safety is of prime importance for this challenging and unique undertaking. The Western Cape Mountains is one of the Strategic Water Source Areas (SWSAs) for surface water in South Africa. SWSAs covers 8% of South Africa and supplies 50% of the mean annual runoff. The biggest threats to SWSAs are invasive alien vegetation and climate change.

The overarching goal of the Helihack project is to upscale operations in this niche field so as to have a higher impact on biodiversity conservation in mountain catchments and to improve the water yields in SWSAs in the Western Cape and beyond.

In late 2017 Cape Town was the first major city in the world to announce “Day Zero” – a shorthand reference for the day when the water level of the major dams supplying the City fell below 13.5 percent and municipal water supplies would largely be switched off. These dams all benefit when alien vegetation with high water usage is eradicated in their mountain catchments. It follows that in an arid country like South Africa, a project such as the Helihack project is of the utmost importance and of national significance.

Specific objectives of the Helihack project are to:

For the first two and a half years the project focus was biocontrol shoots on Hakea using Hackattack (a biocontrol agent) from a helicopter. Hackattack contains an indigenous spore of a fungus that attacks Silky hakea (Hakea sericea) specifically and is a product from the Agricultural Research Council. In August 2020 a special Hackattack operation took place. Three sites were shot with 1800 rounds at Stettyn, Minara and finally Steenboksberg. Steel shot treated with Colletotrichum acutatum spores by the Department of Agriculture was used to target Silky hakea.

The second project focus of the Helihack project has implemented 14 tree felling operations over the past 4 years. Helihacks typically extend from Friday to Sunday. The equipment and personnel are transported by helicopter on Fridays. A safety briefing takes place and the tree felling work starts. Work continues on the Saturday and the teams are extracted on the Sunday. For the first Helihack the crew flew in using skid landing technique. This was soon discontinued as it was not effective. The next approach was to use a strop with rock climbers and equipment hanging on it. The advantage was that climbers could be delivered to steeper ground where the pines are commonly situated.

14 Helihacks have taken place to date.

Generally an estimate of between 4000 and 5000 Pines (Pinus pinaster) are cut down during a weekend dependent on the density. If the Pines are very scattered the total is lower. 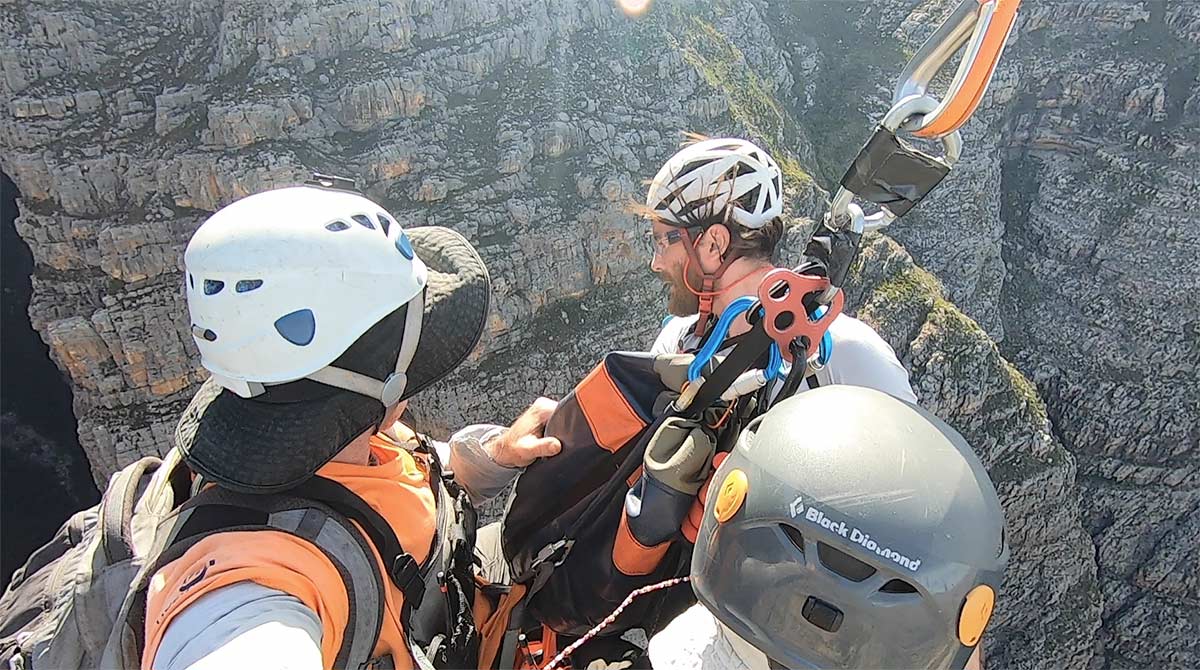 Highly skilled rock climbers that are also chainsaw operators do the tree felling. They are transported by helicopter to remote areas. The Helihack operations showcase the benefits of skilled rock climbers for conservation in remote mountain areas and encourage people to respect the mountains. Many of the team members are also involved in mountain rescue which in South Africa is a volunteer service.

In South Africa the clearing of invasive alien plants is not a new concept. The Working for Water (WfW) programme, launched in 1995, has cleared more than one million hectares of invasive alien plants providing jobs and training to approximately 20 000 people from among the most marginalized sectors of society per annum. WfW currently runs over 300 projects in all nine of South Africa’s provinces. Various private landowners, NGOs, including the Mountain Club of South Arica and other institutions undertake alien clearing operations with good success. However, what makes the Helihack project unique is that the highly skilled teams do what others can’t do at high altitude, in locations where access is complex and dangerous and using specialist skills, namely rock climbers that are chain saw operators. The Helihack operations are more expensive, dangerous and challenging than other approaches to eradicate invasive alien vegetation, but it is more efficient. Locations that are remote in the high catchments can be cleared to prevent spread downstream. The Helihack project benefits the people of Cape Town and surrounding areas as it contributes to biodiversity conservation and an increased water yield in the Boland and Groot Winterhoek Strategic Water Source Areas.