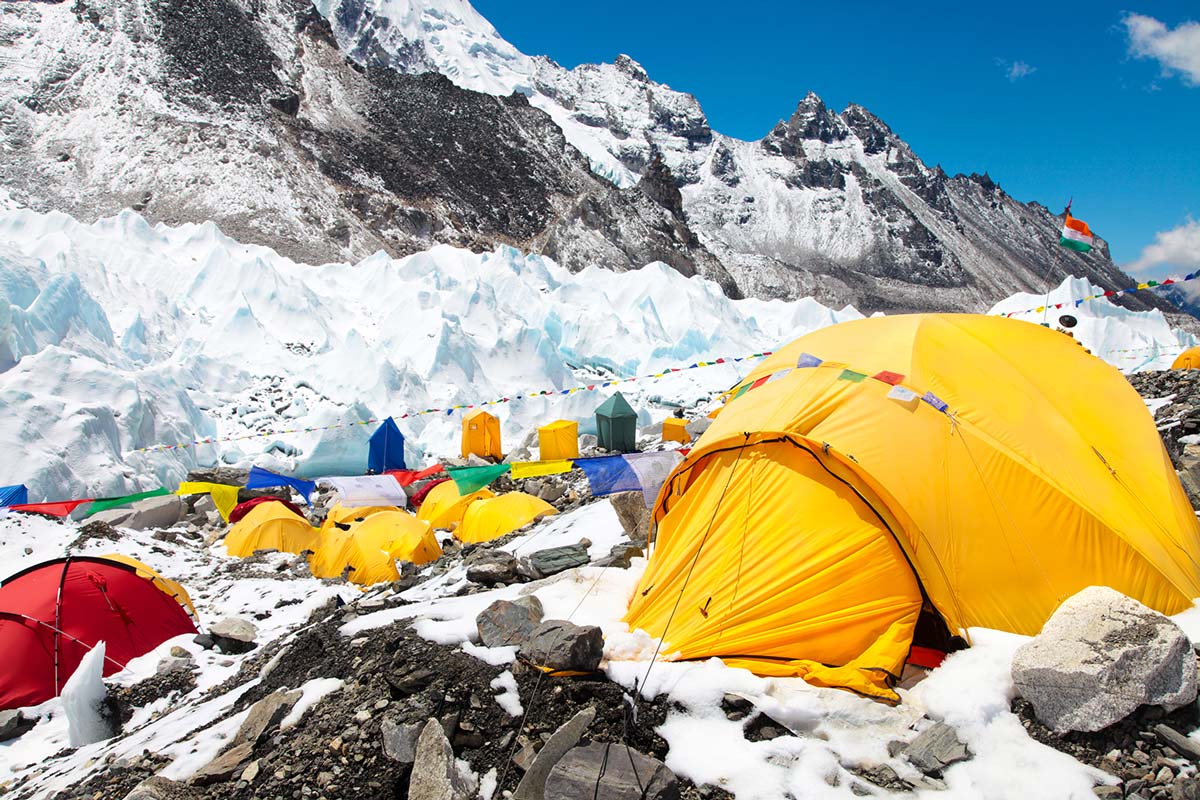 The Lure of the Himalaya

On 28 May, the UIAA – International Climbing and Mountaineering Federation – published a statement in relation to the 2019 climbing season on Everest. The statement has been shared internationally and picked up by several major news agencies. The UIAA has committed to being part of any discussions regarding future Everest climbing seasons.

On the subject of the world’s highest mountain, celebrated mountaineer and former UIAA Management Committee member Doug Scott recently delivered a KeyNote presentation at the annual Himalayan Travel Mart Conference. Doug has shared his speech with the UIAA. It is available to read below.

The following text is courtesy of Doug Scott:

I have been lured into the Himalaya many times as much to be in the Himalayan landscape as to be with the mountain people. I suspect it is the mountain people more than anything that brings visitors back time and time again. I was immediately struck by how hospitable and caring the people are and go about their daily round with a huge smile on their face despite lacking most of the amenities we all take for granted.

I visited Everest twice in 1972 and, in between times, Nepal’s first tourism master plan was drafted. But more about high altitude tourism later.

The first to visit the Himalaya were the bands of nomads during the archaic period 40,000 years ago. There is hardly a Himalayan valley that hasn’t had in residence nomads but also sages, saints and holy men seeking peace and quiet from the madding crowds. The Mani walls are evidence of the devotion once practiced in the Himalaya and also the holy caves, gompas and monasteries. Most of the caves seemed to have been inhabited by Padmasambhava and Milarepa. Did anyone know the Himalaya better? Surely, these Buddhist saints would agree with William Blake, ‘Good things are done when men and mountains meet; this is not done jostling in the street’.

It is a magical place – although now old and feeble and unable to climb Himalayan peaks, I still have an excuse to come out checking on CAN’s (Community Action Nepal – Doug and Trish Scott’s Nepal-based charity) projects and still get above the tree line…… It is there where the vegetation gives out to rock and ice, where just a few flowers struggle on amongst the scree, in the now thin cold air with all the surrounding peaks vibrant against the blue sky that I find myself breathing a sigh of relief to be suddenly back in the mountains. It is so easy to forget how uplifting it is to be in that place. No wonder the Himalaya have been called the abode of the gods.

Europeans were first lured into the Himalaya during the 17th century, they were holy men but this time Jesuits. They were not there to commune with nature as they found the Himalaya inhospitable places of ‘desolation and horror’ – they were seeking the legendary patriarch Prester John and his lost Christian kingdom as well as to gain converts for their Catholic faith.

Then came the British from India to trade with Tibet and China by the back door. Warren Hastings, the Governor-General of Bengal, sent envoys north to make contact with the Dalai Lama. They were Bogel, Hamilton and Turner with Bogel taking in porter loads of seed potatoes with instructions to plant them at every stopping place – one of the benefits of the British in India.

Thereafter, the British arrived in ever increasing numbers… soldiers, explorers, cartographers, geologists, plant hunters and the first Himalayan tourists for, by 1856 as Ruskin put it, ‘mountain gloom gave way to mountain glory’. The mountains after Wordsworth, Coleridge and Keats were now appreciated aesthetically if not romantically.

Then came mountaineers seeking new routes to climb since the alps had been worked out. Why? Because new routes are where it is at. Why? Because there is more uncertainty as to the outcome when setting off where no one has been before. There are still more peaks over 6000m unclimbed than climbed. There is much to do everywhere for serious mountaineers except on Everest, that is now climbed out with all the obvious and less obvious lines taken.

Then came the collectors adding one 8,000 metre summit after another to their tally and usually climbing them by routes pioneered back in the 1950’s. During the last twenty years the Himalaya, and especially Everest, has been increasingly regarded as an exercise bar or more like a racetrack. More about mountaineering later.

The main problem is that of mass tourism destroying the very thing everyone signs up to experience! No one goes to the popular area of the Himalaya these days to find solitude. They are no longer a place for peace, serenity and spiritual renewal due to the constant distraction of fellow trekkers. It’s now hard to make your trek a walking meditation at the height of the season.

My personal experience recently in the Everest region is that there are so many trekkers they are backing up along the trails. Its hard to take a photograph now without other trekkers getting into the shot or waiting patiently behind.

A disappointed friend of mine visiting in April found the once friendly tea houses and lodges to be like fast food joints, where the owners seem to want to get the visitors in and out as fast as possible.

How to reverse this situation and return the most beautiful and dramatic mountain landscape on the planet to a place where the mountain people are not overwhelmed by the sheer number of visitors, and the visitors are not so disappointed.

Is it wise to work out the carrying capacity of the Everest and other popular trails by gathering together a consortium of wise men and women from many disciplines with expertise in environmental impact, tourism, and with knowledge of local people? And then apply quotas. If so, how can this be achieved without causing offence to the visitor and not reduce the income to the local people?

There have been many insurance frauds committed over the last ten years or more, centring on the demand for helicopters to evacuate trekkers for fraudulent reasons. Helicopter companies, agents and hospitals have grown rich at the expense of the insurance companies and ultimately, the trekker.

Some French insurance companies have already started to refuse to insure their nationals from travel in Nepal. Other countries are planning to follow. We all remember how quiet Nepal was during the Maoist insurgency, when the foreign office in many countries recommended non-travel to Nepal. No insurance = no trekkers = no problem! Continuing on this path will solve all problems of overcrowding and associated environmental issues!

Everest and other 8000m summits

Pre 1986, there was one expedition per season per route; which was wonderful. With time and space to be there communing with the mountain as well as each other. In those days you just had to wait for an opening. After 1972 we had to wait again until October 1975. But we didn’t mind waiting. It was part of the experience. Now, people are impatient and want to rush to achieve their goals and move on.

Especially good when coming down; best part of any climb is when you just off the mountain, out of danger before having to deal with porters etc. Clear head, returning strength, internal dialogue slowed down, space between thoughts.

All have seen Nim’s (Nirmal Purja Magar) recent images from Everest where now the climber may be one of a thousand people at the base of mountain. And with 500 people on the mountain with no chance to commune with the divine in nature, nor with one’s inner self.

Why should Everest be treated any differently to Mount Blanc or the Matterhorn? We must respect the fact it is the highest – a World Heritage Site, considered to be of outstanding universal value and to many, the abode of the gods, and in particular Miyolangsangma, the deity of the Sherpa communities.

We have to discuss not only how to protect this sacred mountain, and all mountains, but also protect what is sacred to mountaineering. Respecting the style of the first ascent.

Given the large number of people now attracted to reaching the Everest summit by the original route and the increasing number of deaths, it seems inevitable that the number of permits will have to be limited after deciding the carrying capacity ‘of Everest’ as is done on Denali (the highest peak in North America).

This year none of the eleven deaths were due directly to the vagaries of the weather or conditions on the mountain. There were no storms or earthquakes; all the deaths were related to overcrowding or the increasing number of high-altitude tourists with little or no mountaineering experience.

But how to protect the mountain from the tyranny of numbers and at the same time accommodate those who have come to rely on Everest and other popular mountains for their income?

Here are suggestions from Sherpas, Western Climbers and Other Interested Parties. Our charity CAN only helps where help has been asked for and where it is really needed. We are not donor driven telling the villagers what we think they need. Similarly, I make these suggestions on behalf of friends in Nepal who have asked me to do so, since the commercialisation of Everest and other Himalayan Peaks is largely unplanned and uncontrolled.

To counterbalance the above:

Is mountain tourism promotion compatible with enjoyment of high-altitude tourism? There is so much else to discuss on this including encouraging the dispersal of tourists to less visited areas. And possibly at less visited times of the year. There is work here for local mountain guides and sirdars to explore new trekking routes, especially now it becomes more difficult to find treks away from roads and jeep tracks being scooped out of the mountainsides even above the treeline.

There is also work in capacity development in previously untrekked regions to enable local rural communities there to benefit from mountain tourism by inducting homestay and lodge owners, guides etc into the art of sustainable tourism and supporting them to tap into government funding.

There are many success stories in Nepal:

It can be done, and with the resourcefulness and resilience of the Nepalese people, it will be done!

Images from Doug Scott’s presentation can be downloaded here.