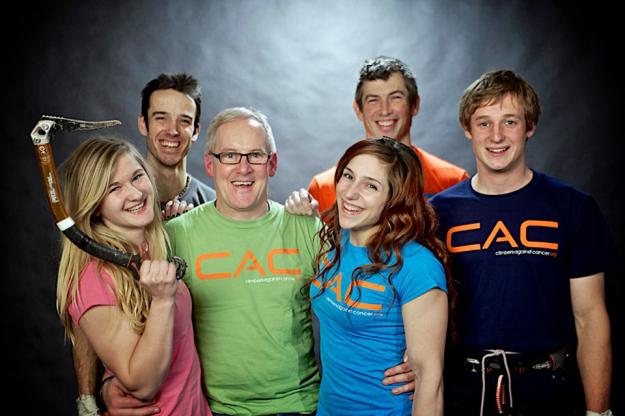 Founder of Climbers Against Cancer smiles through his pain

When British climber John Ellison received the news more than two years ago that he was ill with terminal cancer he realized he had a stark choice to make.

Ellison chose to smile and although there are more than 30 tumours in his body, and the pain is excruciating all day and night, he’s still smiling and determined to keep smiling.

“I chose to smile. I chose to be positive. I continue to make this choice hourly, daily, weekly,” said Ellison recently. “You probably don’t know this, because I smile so much.”

Ellison has also spent the past year building a legacy in the form of the organization Climbers against Cancer which was established in January 2013 and aims to raise awareness and funds to further research into finally finding a cure for cancer.

It’s a remarkable story of the determination of one man to keep smiling, despite the odds and in the process knit together a community of climbers who share a common purpose and give comfort to each other in their darkest days as they climb their most difficult mountain.

In the past year alone, CAC has raised nearly $350,000 (USD) through creative fundraising efforts which include the sale of more than 13,000 t-shirts and hoodies worn today by climbers around the world.

Reinhold Messner besides a Climbers Against Cancer t-shirt (Photo: http://www.climbersagainstcancer.org)

“Whilst thinking about the possibilities of ‘Climbers Against Cancer’ as an idea I remembered the saying ‘strength in numbers’ and how the world of climbing as a family has so much power to deliver a message across the globe,” Ellison writes on the organization’s website.

Inspirational quotes which climbers can identify with dot http://www.climbersagainstcancer.org

“Only when you’ve been in the deepest valley can you know how magnificent it is to be atop the highest mountain,” reads one.

“The man at the top of the mountain did not fall there,” reads another.

“The strength of a man is not in his muscles but what is in his heart,” reads yet another.

Go through the organization’s website and you will see the power of Ellison’s message because it’s not just about him. In the most powerful section of the website titled “Your Stories,” the stories come in from around the world.

It’s about Craig Cornish, a 13-year-old freshman in high school photographed on a climbing wall who shares his story about his battle against Stage 4 Hodgkins Lymphoma Stage. It’s about Takako Iwabuchi, a breast cancer survivor from Tokyo, Japan who took climbing courses while in pain from congenital dysplasia of the hip and bipolar disorder. The two are among a host of others who share their inspiring stories and photos about their own struggles with cancer.

Among Ellison’s supporters rank some of Britain’s best climbers including Andy Turner, an athlete who takes part in the UIAA Ice Climbing World Cup. Turner posed for a download poster supporting Climbers Against Cancer along with other climbers such as Shauna Coxley, Alex Puccio, Tom Randall and Peter Whittaker.

Ellison recently said that he has accepted that his heart and future are limited.

But he remains optimistic that the organization he has founded will outlive him and continue to do the work which remains.

He spoke of a recent trip to Canada where a friend took him to an ancient rainforest where a fallen log lay, which even in death, was critical to the health of the rainforest.

“In dying it remains vital. In dying, it is still full of life,” said Ellison who even as he prepares to undergo yet another round of chemotherapy, believes Climbers Against Cancer belongs to the community of climbers and will continue to grow and thrive.

“Everything is better when we choose to smile,” is Ellison’s message.

A day with John Ellison – founder of Climbing Against Cancer from Polished Project on Vimeo.