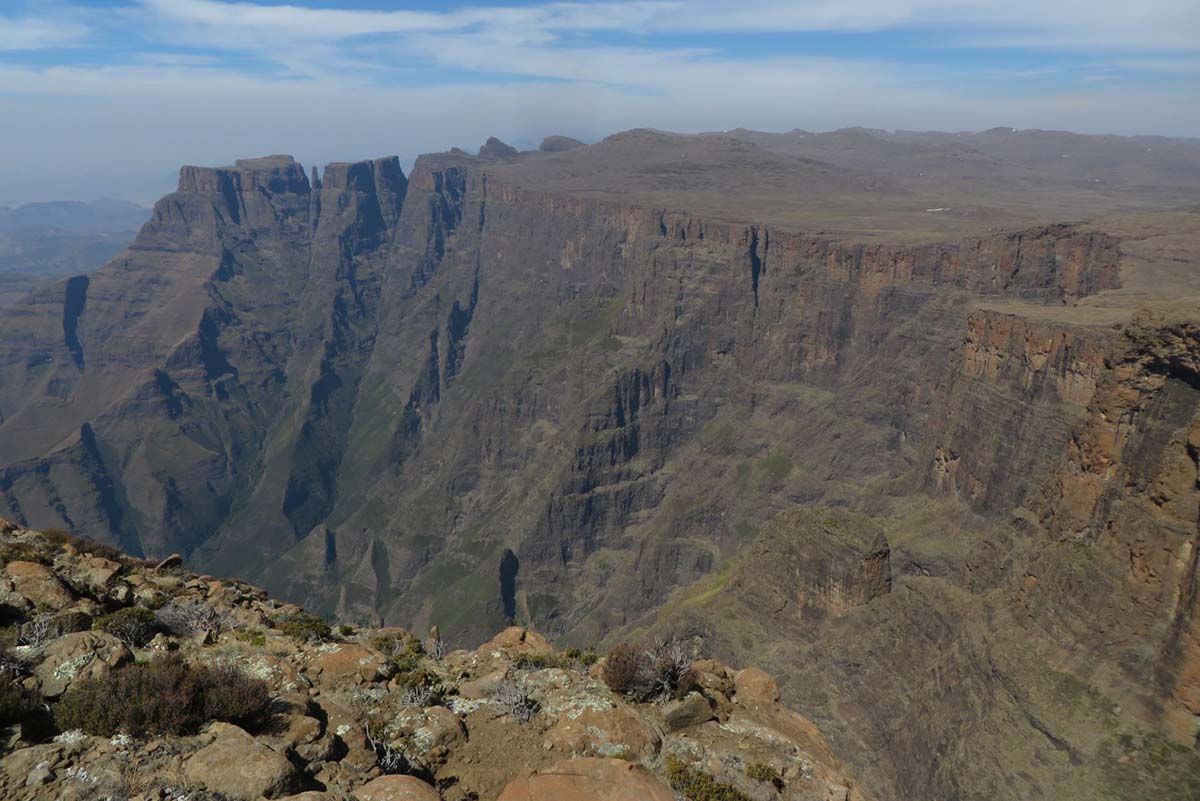 South Africa is not only about sunny beaches and game reserves teeming with African wildlife.  The country is also home to extensive ranges of mountains, offering opportunities for hiking, mountaineering, canyoning, rock climbing (trad and sport), bouldering, and even a few spots for ice climbing in midwinter.

Its highest range is the Drakensberg, with basalt peaks rising to nearly 3500 metres in the remote mountain kingdom of Lesotho, the country with the highest minimum altitude in the world.  In the Western Cape Province, ranges from the Cederberg to the Outeniquas offer climbing on sandstone in the botanical wonderland of the Cape Floristic Region, the smallest of the six recognised floral kingdoms of the world.  In Namibia, granite inselbergs such as the Spitzkoppe tower over the Namib Desert. And much more besides.

The Constitution of the Republic of South Africa protects many human rights, but these do not include the right to roam the mountains for recreational purposes.  Access to the mountains requires the permission of the landowner  –  either the State or a private landowner.

The Mountain Club of South Africa (MCSA), established in 1891 and the first UIAA member in Africa, comprises 14 autonomous Sections spread throughout the country.  Each Section generally deals with the issues of mountain access in its own area, and works hard at building and maintaining relationships with landowners, to ensure mountain access for its members and guests.

Most mountain land owned by the State or statutory entities has been proclaimed as a protected area, such as a national park, a nature reserve or a mountain catchment area.  Many of these are also proclaimed UNESCO World Heritage Sites. Most protected areas have a management plan for environmental conservation and regulations governing access and activities within them, so the public may have access to these areas subject to the conditions applicable in each case. The 19 national parks in South Africa are managed by the S A National Parks Board (SANParks  –  see www.sanparks.org).  Some of these parks hold dangerous wild animals such as lion and elephant, so hikers must be accompanied by armed game rangers.  On the other hand, Table Mountain National Park is a gem in the heart of the City of Cape Town, with easy access for all.  Sir Edmund Hillary is reported to have said “There is probably no more spectacular place in the world than Cape Town and Table Mountain at the tip of Africa”.  Table Mountain, recently proclaimed one of the Seven New Natural Wonders of the World, heads an 80-kilometre string of peaks that offer a great many classic rock climbing routes, bouldering spots, footpaths for hikers and several bolted crags for sport climbing.  By agreement with SANParks, the MCSA manages all the bolting in the Park.  MCSA volunteers also form the backbone of the mountain search & rescue service  –  Cape Town Section alone participated in 185 rescues in 2017.

State nature reserves are usually managed by the local municipality or by provincial entities such as the Western Cape Nature Conservation Board (CapeNature  –  see www.capenature.co.za) and Ezemvelo KZN Wildlife (see www.kznwildlife.org).  Again, the MCSA maintains good relationships with these entities, and we have been able to assist them with such things as bolting, rock climbing guidebooks, search and rescue, and a survey of their hiking trail systems, and they have granted us some special privileges such as access to some pristine mountain areas that are closed to the general public. Many mountains are in private ownership, usually forming part of a farm which depends on mountain water for irrigation. Some farmers offer accommodation on their farms to the public on a commercial basis, and allow their paying guests access to their mountains.  Most farmers have understandable concerns about allowing strangers access to their farms. These concerns include the safety and security of their farmworkers, crime such as stock theft, the risk of liability arising from veld fires or personal injury, littering, pollution of water sources, and even the nuisance of traffic raising dust which may spoil export fruit. Yet many farmers have proved willing to share their mountains with dependable people who appreciate mountain splendour, and the MCSA has been able to build relationships and develop arrangements for access to many privately-owned mountain areas.  Some of these arrangements lead to written agreements and protocols for visitors but ultimately they depend upon trust, which arises when visitors show due respect for the farmers, their neighbours and the land itself.  Farmers also appreciate that we are able to be their eyes and ears, to report back to them on issues such as outbreaks of invasive alien vegetation in remote parts of their land.

Over the years, by donation or purchase, the MCSA has acquired ownership of, or registered servitude rights of access to, many extensive tracts of mountain land.  On some of these properties we have built huts or shelters, while most of the properties are pristine, just the way God made them.  The MCSA’s twofold objective is to conserve this land for posterity and for our members and their guests to have unhindered access to it, to explore, camp and climb.  See for example the properties listed and described at www.mcsacapetown.co.za/access-properties/.  Again, to reach some of these remote properties, the MCSA must cross the land of other landowners, and in each case we have had to negotiate arrangements for access.  Most of these arrangements have been recorded in written agreements, and some even registered as formal access servitudes against our neighbours’ title deeds.

The MCSA believes that arrangements for access to the mountains in South Africa are in pretty good shape and looks forward to welcoming members of UIAA affiliates to come and explore them.

Article by Richard Sherry and Tony Lourens.  Richard is a Corresponding Member of the UIAA’s Access Commission and convenor of the Access Subcommittee of the MCSA’s Cape Town Section.  Tony is a member of that Subcommittee, an active climber, the author many climbing guidebooks and editor of S A Mountain magazine (see www.samountain.co.za).