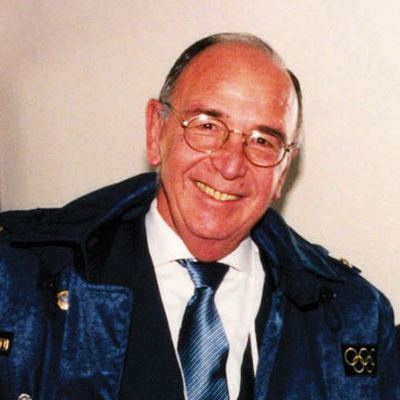 Wednesday 22 June marks the 15th anniversary of the opening of the 41stInternational Olympic Academy (IOA) session, an opportune time to remember one of the late Honorary Members of the UIAA who received the Olympic Order during the two-week long congress.

George Moissidis of Greece was bestowed this highest of honours – awarded for particularly distinguished contributions to the Olympic Movement –  by IOC President Juan Antonio Samaranch. Mr Mossidis was recognized as ‘a lover of sport and distinguished member of the Greek Climbing and Skiing Federation’. He was a member of the Hellenic Olympic Committee since 1953.

Mr Mossidis, who had a passion for various sports including athletics, rowing, skiing and alpinism, rose though the ranks of the Hellenic Federation of Mountaineering and Climbing having joined in 1953. He served as a Higher Office (1953-85), Deputy Secretary (1964-74), Secretary General (1974-82) and then President of the Hellenic Ski Federation after its foundation from 1987-88 and then 1992-1998.

He represented Greece in various international congresses and colloquiums as well as in numerous General Assemblies of the International Federation of Ski (FIS) and the UIAA. His relationship with the UIAA was particularly close. He served as Vice President from 1991-1993 (under Pietro Segantini) and President of the Safety Commission from 1978-84. He became an Honorary Member of the UIAA in 1985. His relationship with the IOC was also significant, from his 23-year role as Vice President of the International Olympic Academy to serving as a member of the IOC Commission for Culture and Olympic Education.

Since 1995, the UIAA has been recognized by the International Olympic Committee (IOC) as the international federation representing climbing and mountaineering.