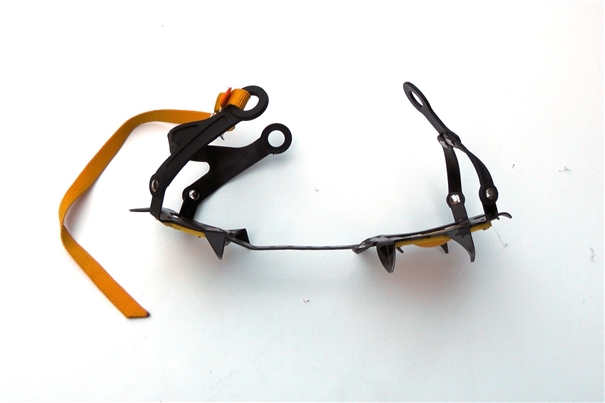 The British Mountaineering Council has posted a warning about dangerous crampons being sold online.
As the warning states:

Getting equipped to tackle the mountains in winter can seem an expensive business, with the cost of boots, axe and crampons totting up to a fair sum. It may be tempting to save money by snapping up a cheap bargain online. Be warned though, this may cost you a lot more than a pair of crampons in the long run.

The warning reports that several cases have been reported of cheap crampons which have bent and folded up on themselves during their first day of use. These  items are being sold via the most well known online trading site. They look superficially similar to a product from a well known and very reputable European manufacturer, but these are not by any stretch comparable to a real pair of crampons.

Crampons sold within the EU must conform to EN 893, which sets a minimum standard for the strength of the points, the frame and any attachment points or bails. Such a crampon will be CE marked and have both the name of the manufacturer and the year of manufacture marked on it. In addition there will be attached to the new crampons a set of instructions telling you what you need to know about fitting, inspecting and maintaining them.

The imitation crampons being sold online don’t conform to these standards and are a hazard to anybody who ends up relying on them for their security whilst out on the hill. If you have bought a pair, contact your local Trading Standards office.
Although it is possible to buy proper crampons online, unless you have used the same crampons before with your boots, you’ve no guarantee that the combination will fit together properly. We’d always recommend that you buy your crampons by taking your boots with you to a good outdoor retailer so that you can check that they work together before you purchase.
UPDATE:
The BMC did some searching online, and it looks as though there are also some which look like Petzl crampons. Here’s the links the BMC found so far:
http://tinyurl.com/nfngqc3
http://tinyurl.com/kf3whgf
http://tinyurl.com/k7uj69r
Share: