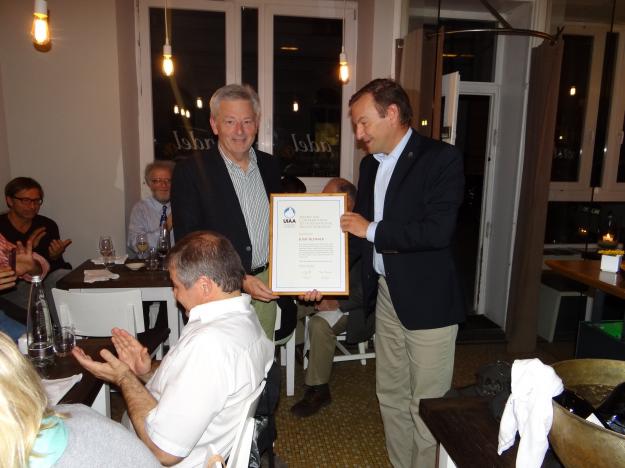 Klenner’s twin passions of conservation and love of climbing and mountaineering was recognized on 24 March 2014 with a special award by the UIAA at a gathering in Munich, Germany.

“Great things happen when men and mountains meet,” said Frits Vrijlandt, president of the UIAA – International Climbing and Mountaineering Federation. “In the case of Klenner, we have a meeting which has re-united the UIAA with its members around the world and the DAV, the world’s largest climbing and mountaineering federation.”

Klenner was instrumental in the DAV re-joining the UIAA during the annual General Assembly in Pontresina, Switzerland in October 2013 after the club departed from the UIAA family for a brief period.

As the current and former president of the DAV, Klenner has a long history of involvement with the UIAA which dates back to 1992 – 2005 when he was an active and well-respected member of the UIAA Council. He was also chairman of the Restructuring Working Group between 2003-2004.

“It is with deep appreciation that I have the honour, with the unanimous vote of the Management Committee of giving you this Award for outstanding contribution to the UIAA,” said Vrijlandt. “Klenner’s contributions to the growth of climbing and mountaineering, and the need to conserve the mountain environment deserve respect, recognition and gratitude.”

Klenner is also very active in the international arena in other forums. In 2004 he was elected to president of the club Arc alpine (CAA) and has been active in playing a leadership role in to advance the goals of eight alpine associations.

In 2011 Klenner was awarded the Cross of Merit 1stClass by the Federal Republic of Germany for his volunteer work with the DAV. As president, Klenner has maintained a strong focus on conservation efforts in the German Alps and raising the profile of the club. About the German Alpine Club (DAV)

The German Alpine Club (DAV) was founded in 1869 and has become the world’s largest alpine sports organization with more than one million members. Its members come from 355 independent sections across Germany.  Members can take advantage of special accommodation rates offered in its more than 300 alpine cabins and chalets and are offered alpine tours and activities, alpine safety and orientation training and have access to maps, guides and books from the DAV libraries at a reduced fee or free of charge.

The UIAA was founded in 1932 and has a global presence on five continents with 80 member associations in 50 countries representing about 2.9 million people. The organization’s mission is to promote the growth and protection of climbing and mountaineering worldwide, advance safe and ethical mountain practices and promote responsible access, culture and environmental protection.

The organization operates through the work of its commissions which make recommendations, set policy and advocate on behalf of the mountaineering community. The UIAA is recognized by the International Olympic Committee.