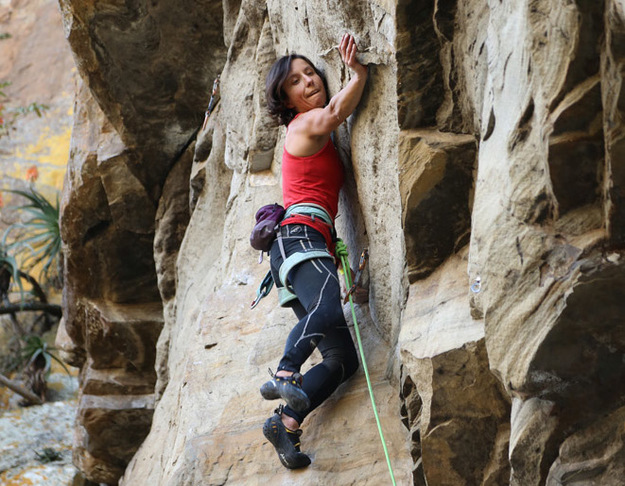 The first UIAA Rock Climbers’ Award at a rock climbing festival was held in the scenic Umgeni Valley in KwaZulu – Natal, South Africa in June 2015.

The event in KwaZulu – Natal which was organized by the Southern Climbing Centre with support from UIAA member federation, the Mountain Club of South Africa, attracted about 80 climbers. UIAA Management Committee member Anne Arran attended the event.

It took place in the Umgeni nature reserve against a backdrop of zebra, warthog and trains of furry caterpillars and is the brainchild of Roger Nattrass and Illona Pelse, both local climbers who have climbed extensively across South Africa.

Environmental impact studies had to be undertaken and a cautious pilot project led to the crag being developed for sport and trad climbing in the reserver and the inaugural Origin Festival this year.

“Hosting the inaugural Southern Rock Origin Mountain Festival was the culmination of two personal goals,” said Nattrass. “The first being the conclusion of an eight year process to secure and develop rock climbing at the Umgeni Valley Nature Reserve.

“The second goal was to establish an event that celebrated the different interest groups found in climbing today – at one location and under one banner, the Origin Festival,” he said. “The event enjoyed a full program of workshops, bouldering, traditional climbing, sport climbing and a difficulty competition all set in spectacular surrounds with accommodation in an “Out of Africa” bush camp experience.”

Nattrass said having the UIAA involved dovetailed perfectly with the goals of the festival.

“The Rock Climbers Award acknowledged the athletes while the support of the UIAA for the event endorsed our principle of celebrating many aspects of rock climbing,” said Nattrass.

The Umgeni Valley reserve is owned and managed as an environmental education center and the climbing management plan was established cautiously over time with this sensitivity and ethos in mind.

Arran said there was no shortage of inspiration at the festival and climbers raised their game.

“The strong sense of community was served up by using a single defined section of the crag for the festival programme, with easy and hard routes all available in a short space,” said Arran. “The night was cold but warmed by campfire and barbecue. Meeting people was easy and fun whether over real coffee at the morning jet boil demonstration or at the crag.”

Two climbers were recognised during the festival: Paul Brouard and Gosia Lipinska. Paul Brouard was the winner of the first UIAA Rock Climbers’ Award in the men’s category in South Africa (Photo: Anne Arran for UIAA)

Paul Brouard: Routes included: Blue Horizon (32/8b), Secret Ninja – (31/8a+), Mango Tango – repeat (31/8a+). Brouard is father of an 8-month-old child which he said means plenty of sleep deprivation. He is one of the few South Africans to have climbed 8c+  achieving all of this with talent, structure and preparation. He is also a climbing coach in Singapore.

Gosia Lipinska: Lipinska is a lover of big adventure as well as the pure gymnastic fun of sport climbing. Nattrass described her as a well trad, expedition climber and a runner a leader in the development of women’s climbing in South Africa. She is well travelled and often featured in South Africa’s climbing magazines.

To qualify for the prize, rock climbing festivals must be accredited by a UIAA assessment panel for the event and climbers to be eligible for prize purse of CHF 1’000 shared between male and female winners. An event must also be organized by a national member federation of the UIAA to be eligible.