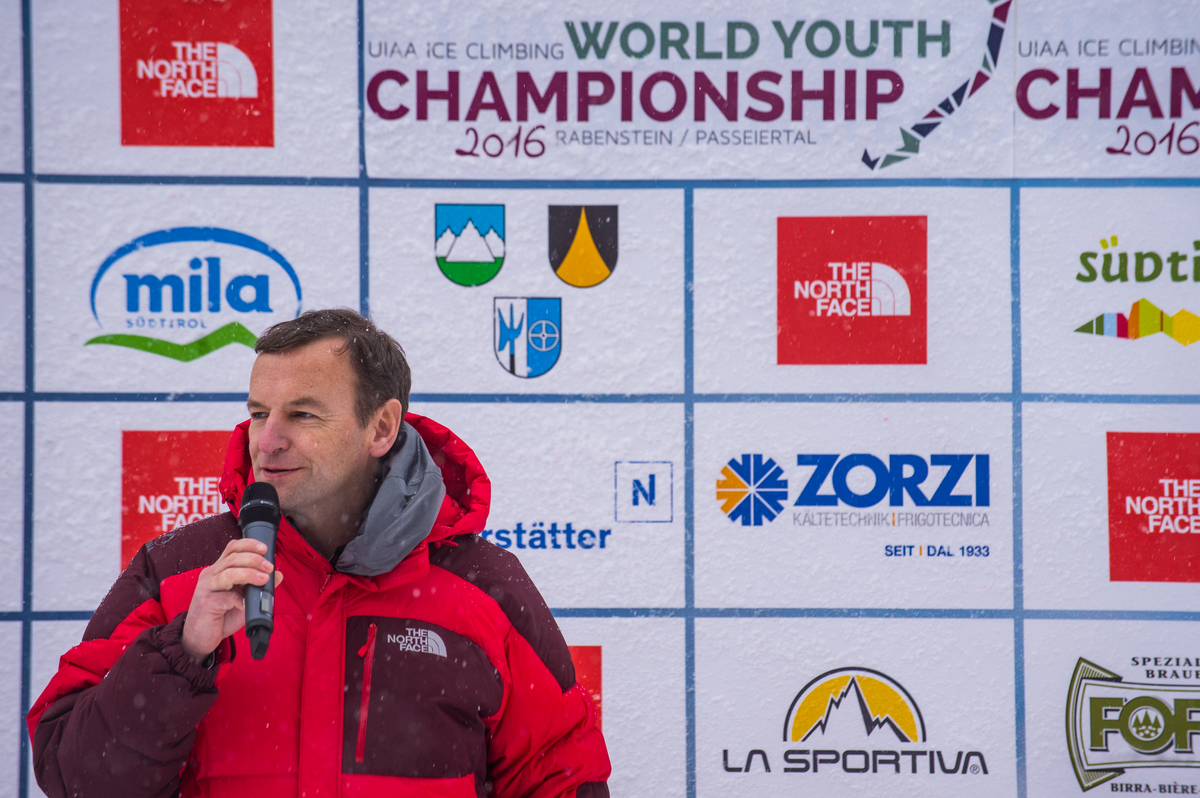 On 13 October, 2012, Frits Vrijlandt was voted in as President of the UIAA at the General Assembly hosted in Amsterdam. This year’s UIAA General Assembly, to be held on Saturday 15 October in Brixen-Bressanone, Italy will mark Vrijlandt’s fourth anniversary as the federation’s figurehead. It presents an opportune moment to reflect on the progress made by the UIAA over the past four years.

In this interview, Vrijlandt provides details on a range of topics from sustainability to safety, ice climbing to member federations and the UIAA’s role in the world of climbing and mountaineering today.

UIAA: Back in 2012, why did you decide to put forward your candidacy for President of the UIAA?

Frits Vrijlandt: I had been involved in the UIAA Management Committee for six years and felt very passionate about the work and values of the UIAA. Back in 2012, the federation was experiencing a turbulent period and an opportunity arose to present my candidacy for President and to try and steer the federation into more stable times.

UIAA: What was the situation you inherited?

FV: We had lived through a period defined by wasted, negative energy. The turbulent times are well documented from the split with the sport climbing and ski mountaineering federations through to dissatisfaction among several member federations and a prevailing sense that there was a lack of leadership at the helm.

UIAA: On becoming President what was your first challenge?

FV: To draw a line under all of the issues. To start afresh. One of the key aspects was regaining the confidence of member federations and bringing some, such as the German and Austrian alpine clubs, back into the fold. Secondly, it was vital we created a stable office environment to ensure the daily running of the UIAA was efficient and to the high standards required of an international federation. UIAA: In your acceptance speech in 2012, you raised the importance of the Strategic Plan (2013-16). What were the main aspects of this road book?

FV: As a Management Committee representative, I had been deeply involved in developing the Strategic Plan, notably the second phase of it. I always believed it was a very good instrument to keep our focus and detail what we wanted to achieve.  We made it possible to concentrate the key points around our three pillars of sustainability, sport and safety. They were wide-ranging and included developing our training standards for climbing and mountaineering, extending our goals in mountain protection, increasing our commitment to mountain safety and continuing to develop ice climbing competitions.

UIAA: Talking specifically about the three pillars you mention. Starting with mountain sustainability. The UIAA is becoming a major player in this area, why is this?

FV: Very simply, the mountains of the world are our playground. It is in our interest to take care of them, to ensure that there is never a point from which we can’t turn back. Mountains are beautiful environments, we love being in them, visiting them, exploring them. But they are also the water towers for much of the world and increasingly fragile. As representatives of all mountain users, it is our duty to represent them but also educate users about the need to protect the mountain environments and for everyone to become an ambassador for mountain protection. Our Mountain Protection Award and Respect the Mountains Series, both launched in the past four years are a sign of our commitment as is our presence at major international conventions on climate change. We were present at COP21 and are recognised by the United Nations. The Respect the Mountains Series, partnered by KEEN, is one of the UIAA’s core projects in sustainability

UIAA: Is the sport of ice climbing in a healthier state than in 2012?

FV: Absolutely. There have been many notable achievements, a strong World Cup series which now features a regular stop on three continents, our presence in Sochi and Lillehammer as part of the Olympic movement. The continued collaboration with The North Face Korea. The number of youth participations is rising all of the time. There are still challenges but we are on track.

UIAA: Talking about the ambition of ice climbing becoming an official Winter Olympic sport in 2022, what steps need to be taken to realise this goal?

FV: Our presence in the Olympic Park in Sochi was a seminal moment followed then by ice climbing’s appearance as an official IOC demonstration event at the Winter Youth Olympic Games in Lillehammer. Currently all lights are green but there are many hurdles still to jump. The IOC has shown its openness to new sports looking at the 2020 decisions. With that in mind, ice climbing is a very stable sport, one which is blooming and appeals to a young demographic. The next two Olympic Winter Games will both be in Asia.  We are currently working on our presence as an IOC demonstration event at the next Winter Olympic Games in Pyeongchang. And with the 2022 Winter Olympics being held in Beijing, the confirmation of a Chinese-based World Cup event in the annual ice climbing calendar is one of our objectives. And we are on track to meeting this. UIAA: In terms of mountain safety. What developments have been made?

FV: A continuation of our tradition as setters of global standards. Our huge knowledge library of mountain medicine is a valuable resource to climbers of all experiences. Together with our safety standards and training qualifications they ensure we are forerunners in improving global standards for climbing and mountaineering. Standards which are respected and recognised everywhere and to the benefit of our member federations. Our Commissions work tirelessly in developing new standards and ensuring existing ones are updated when relevant.

UIAA: Across all of these pillars, how important is the work of the UIAA Commissions?

FV: The work of our Commissions, led by experts in their respective fields is crucial. Their contribution and knowledge is extremely valuable. To cite some specific examples our work in supporting member federations with access issues is widely appreciated, our anti-doping programme and ‘clean climbing’ campaign adheres to all WADA requirements, which is not only about testing athletes but educating them too. Our commitment to youth participation both in sport and sustainable projects is strong.

UIAA: What has been the biggest achievement of your tenure?

FV: Seeing everyone work together for a common goal, the positive approach to working in a constructive manner in the spirit of the UIAA.

UIAA: Are there moments you are particularly proud of?

FV: There are too many to choose from but one anecdote I can share came from the 20th anniversary of the UAAA in Hiroshima in 2014, where all Asian federations came to share their work and collaborate. I was very honoured to be there and experienced this positive exchange of different views and ideas. Being in Sochi and Lillehammer and seeing our athletes meet those from other sports and share their love of ice climbing was also a special moment. UIAA: How do you view the UIAA’s reputation within the climbing and mountaineering world?

FV: As a global umbrella organisation which has always strove to unite climbers and mountaineers around the world. Serving our member federations is our main goal, despite the huge differences between them. But regardless of their background or possibilities they all share the same passion for climbing and mountaineering.

UIAA: Why is the still UIAA significant for climbers and mountaineers?

FV: We are a global organisation and provide an international platform for climbing and mountaineering. We have a lot of history and heritage but are a modern, progressive organisation. The UIAA is not a conservative organisation, we keep the good things from the past, have very strong core values and traditions but are continually evolving as our work in recent times proves. From small federations with a few hundred members to those with over a million, from those with the highest mountains and those from the low countries, we help and care for everybody.

UIAA: Climbing and mountaineering are often portrayed in a negative light by the media. How does the UIAA work in changing this perception?

FV: On lots of levels. In terms of assessing accidents we are working with partners on a database which will provide critical information and data. Our standards in training, safety and mountain medicine library are wonderful resources for climbers and mountaineers, designed to help them improve their skills, direct them to using the safest equipment and to provide them with the knowledge at hand to make the best decisions in any given moment. The benefits of climbing and mountaineering are immeasurable from creating friendships, bringing different cultures together as well as the countless physical and mental benefits. Through all of our projects, promotion of what we love is at the core.

UIAA: How successfully has the UIAA worked on attracting new member federations?

FV: Over the past four years we have noticed a big rise in countries applying to become members. This year alone we expect to welcome new members from three different continents. Their reasons for joining are varied from wanting to have a say in the future of climbing and mountaineering, sharing knowledge and information, being able to send athletes to ice climbing competitions, having access to training standards programmes, the latter particularly crucial for many smaller federations.

UIAA: How important has it been having a strong working relationship with your fellow Executive Board members?

FV: This has been very important and I thank them all for their hard work. We communicate regularly by conference call as we meet each other in person only four times a year to limit travel expenses. As a global organisation, it is important that our international presence is reflected in our organisation and at Board level. When I started in 2012 we were only from Europe. For the last two years we have a Board member from the Americas and I hope we can add a Board member from Asia as the continent is very important for the future development of our climbing family. UIAA: Do you still find time to climb?

FV: I have a young family and lots of commitments but I still try to do as much as possible from being in the mountains to climbing in the gym. One of my more recent experiences was rock climbing in Rio during the Olympic Games. A great memory!