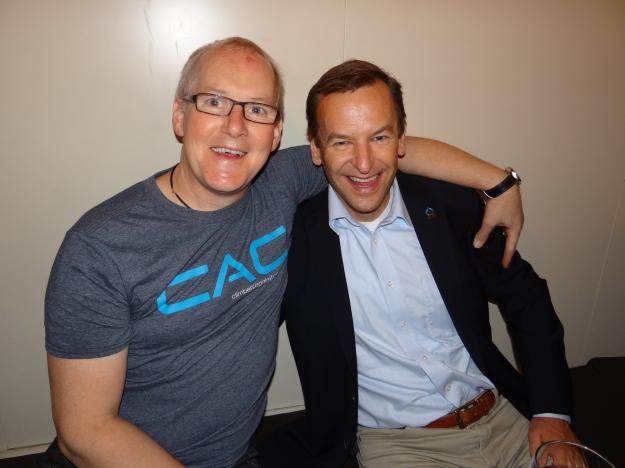 John Ellison and UIAA president Frits Vrijlandt before Ellison received a UIAA award in recognition of his role in founding Climbers Against Cancer (Photo: UIAA)

24 May 2014, MUNICH, Germany: John Ellison’s refusal to be bowed down by the cancer, instead establishing a charity that has raised hundreds of thousands of dollars from climbers and mountaineers, has been honoured by the UIAA – International Climbing and Mountaineering Federation.

The award which was handed to Ellison at a meeting of the UIAA Management Committee in Munich on 24 May 2014 notes that Ellison is being feted for his outstanding efforts to bring together the global family of climbers and mountaineers to raise funds for research to fight and beat cancer.

After being diagnosed with terminal cancer more than two years ago, Ellison has spent the past year and a half building a legacy in the form of the organization Climbers against Cancer which was founded in January 2013.

In its first year, Climbers Against Cancer (CAC) has raised nearly $350,000 (USD) through creative fundraising efforts which include the sale of more than 13,000 t-shirts and hoodies worn today by climbers around the world.

Vrijlandt said the UIAA has chosen to honour Ellison for his dedication and persistence in founding a charity that has united mountaineers, ice climbers, rock climbers, boulderers and sport climbers as well those who pursue the sport for competitive or recreational reasons.

“Every now and then someone comes along who transcends divisions and Ellison, through his personal battle against cancer which he has fought with such dignity and that wonderful smile, has taught us all the true meaning of what we are all about,” said Vrijlandt.

Vrijlandt said he was particular touched by a quote that Ellison uses on the organization website: “Only when you’ve been in the deepest valley can you know how magnificent it is to be atop the highest mountain.”
Ellison said he was honoured to receive the award from the UIAA on behalf of climbers worldwide, their families, friends and everyone who has helped by supporting CAC.

“It was a pleasure for me to share the story with the Management Committee and hopefully together we can take the charity forward and raise more funds and awareness to help with the fight against cancer,” said Ellison.

Ellison has explained his reasons for founding his charity with these words:

“Whilst thinking about the possibilities of ‘Climbers Against Cancer’ as an idea I remembered the saying ‘strength in numbers’ and how the world of climbing as a family has so much power to deliver a message across the globe.”

If you wish to donate to Climbers Against Cancer please click on this link.