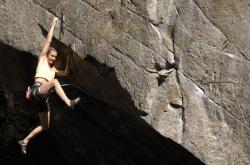 Marietta Uhden the first female German athlete to win a UIAA World Cup in Bouldering was a champion climber and athlete whose love of climbing and passion for the sport was legendary.

Born in 1968, the former professional climber passed away on 24 November 2014 after a long battle with cancer which friends said fought for years with the same strength, energy and tenacity she brought to her climbing.

“Her climbs will certainly be remembered fondly also by the Arco Rock Master spectators who always reserved a special applause to Uhden after identifying with the German, a shy but hugely determined, ever smiling personality,” the German Alpine Club said in tribute.

“The German Alpine Club mourns over Marietta Uhden and sends all the best and much strength to her family and friends in this difficult time.”

UIAA president Frits Vrijlandt said Uhden was one of the great athletes in the history of UIAA climbing, long before sport climbing competitions came under the purview of the IFSC in 2007.

“What we remember most about Marietta is her total love of climbing whether it was on the competition circuit or rock climbing outdoors,” said Vrijlandt. “We will miss her greatly and fondly.”

Uhden’s success came early and she joined the German national sports climbing in team in her 1992 where she quickly cemented her reputation as the best female German athlete for years to come.

In 2005 she decided to quit her career and spend more time with outdoor climbing and her family.

Climbing was always a huge part of Marietta’s positive philosophy of life, the German Alpine Club quoting Uhden: “Climbing has not become a profession for me, even though I see myself as a professional climber. It’s just a way of life.”