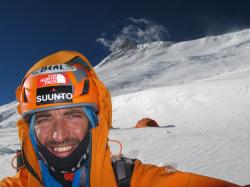 Tunk Findik: “For all their perils, the 8000 meter mountains had enriched my life beyond my wildest dreams” (Photo: Tunc Findik for UIAA )

Findik’s achievements are all the more remarkable because the sport is not very popular in Turkey and getting sponsorships for climbing expeditions around the world has been difficult, said UIAA Management Committee and ZMC member Nejat Akinci.

“Findik is a role model for many young mountaineers in Turkey,” said Akinci.

Despite the challenges of being a climber in Turkey, Findik is now a North Face athlete. He’s also gone to become an elite, all-round rock & ice  climber with more than 350 new routes, first ascents and first winter ascents  in Turkey and around the world.

Climbing the world’s 14 highest mountains above 8000 metres is an achievement that has only been completed by 33 climbers since the circuit was first completed by the renowned Italian climber Reinhold Messner in 1986.

Born in Ankara, Turkey in 1972 Findik is a graduate of Ankara – Bilkent University’s Faculty of English Language and Literature. His works as a professional climber and mountaineer, climbing instructor and mountain guide, as well as a photographer, lecturer and prolific writer.
He has authored nine books including a guide book to the Kackar range in northeastern Turkey and another guidebook to the Taurus mountain range. His other books include memoirs, technical instruction books in addition to translation of climbing and mountaineering books from English to Turkish.

In his forthcoming book Altitude 8000, Findik writes that the mountains became an integral part of his life as he discovered and understood that his quest for freedom lay in the mountains.

“There is no other place I would rather be when it comes to mountains and climbing; I had never felt freer anywhere else,” writes Findik. “This feeling did not desert me since the first day I started climbing and mountaineering. In a way, mountains were the only places where I sensed myself as a whole with the universe and where I could define my own reason of creation without question. Despite all the inherent hardships and sacrifices, alpinism had been a worthwhile journey for my soul and body.”

Findik said climbing all fourteen 8,000m peaks was not what he started to do when he first began to climb the high and difficult peaks of the Himalaya, “though it turned out t be my aim as the years progressed, the decision being taken after climbing Lhotse.”

“For all their perils, the 8000 meter mountains had enriched my life beyond my wildest dreams. I lived for and strived to create the right conditions for climbing yet another 8000 meter peak, time and again, and I still do. On this difficult and dangerous path, fortune was on my side and I was able to make the right moves at the right places, with the right people,” he writes.

As for climbing and mountaineering in Turkey, Findik said the sports are still considered “outlandish and weird, unpopular to the Turkish mind and culture,” and sadly little support for it.

“However, Turkey is a land of mountains and snow, especially eastern Turkey being a genuine haven for all kinds of climbing, from frozen icefalls to big alpine walls,” he said. “In fact I really do enjoy being a climber in Turkey, due to the fact that wherever you travel to climb in Turkey, it is mostly unexplored, wild and virgin.

Findik said climbing in Turkey gives him a similar experience to what he can only sample in the Himalayan wilderness. As he puts it: “climbing on a rock wall that no one has touched before, cramponing a certainly unexplored ice gully, summiting an unclimbed technical rock pinnacle or wandering in high alpine valleys without meeting another soul for weeks.”

Findik said he has mapped out his plans for the remaining four peaks with the next climb being Annapurna 1 (8091m) or Nanga Parbat (8126m) in 2015 followed by Gasherbrum 1 8058m and Broad Peak 8047m (both in Pakistan) within three years.