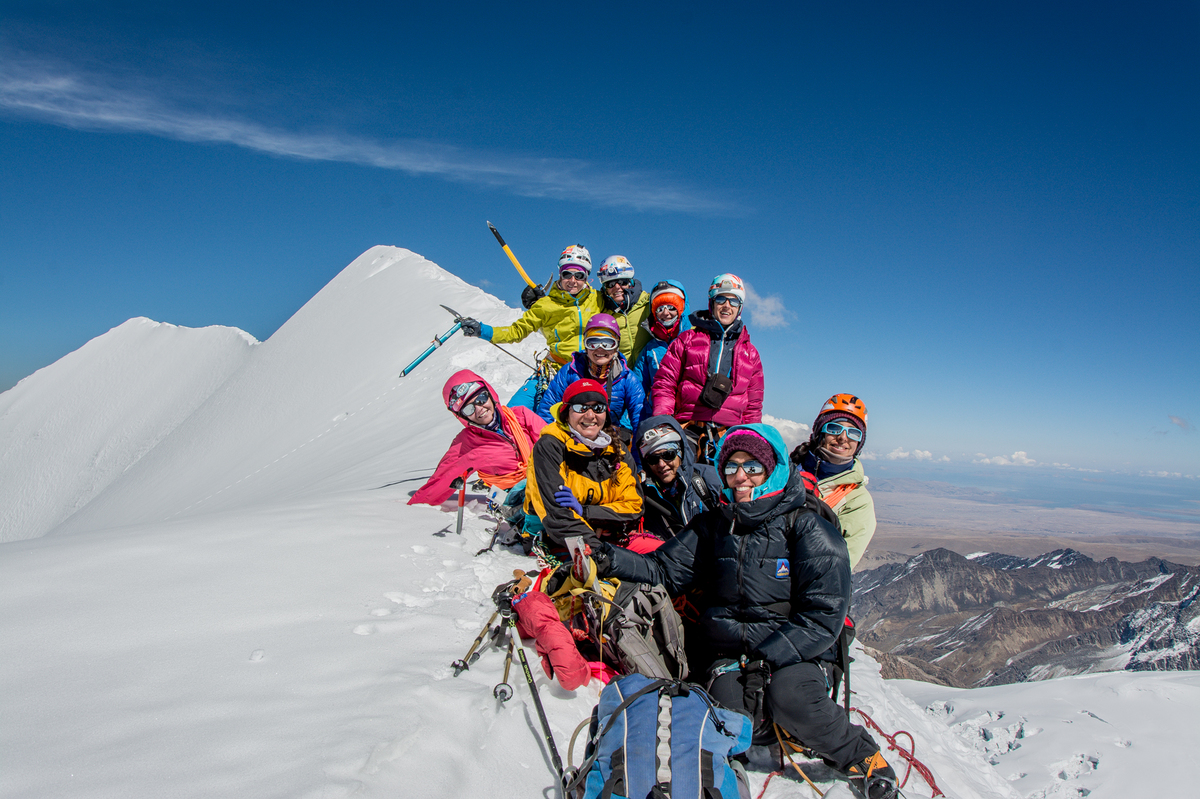 The team at Mujer Montaña from Latin America, a project showcased in the UIAA’s Mountain Protection Award Platform, joined up with the Women’s High Mountain Group of the French Federation of Alpine Mountain Clubs (Fédération française des clubs alpins et de montagne, FFCAM, a UIAA member since 1932) to bring Latin American and European women together in a historic Andean – Alpine mountaineering exchange last August, in an exchange filled with sport, culture, and socio-environmental awareness in the mountains of Bolivia.

The Quimsa Cruz and the Cordillera Real mountain ranges of Bolivia were the scenarios chosen for this intercultural sporting exchange, with the intention of not only achieving the first female ascents and opening of new routes in rock and ice, but also sharing a space where different worldviews can meet and exchange experiences on ways of approaching and tackling a mountain climb. The idea was to promote solidarity among various countries through a collective project. The project was part of a film documentary, which aims at reporting this experience from an anthropological perspective – exploring how the sport of mountaineering can serve as a gateway to uncover the bond one has with the mountain, thereby promoting a passion for the mountains as a school of life, respect with our earth, enhance the spiritual sense for mountain activities, companionship, solidarity, and friendship. The Women’s High Mountain Group of the FFCAM was founded in December 2014 as an initiative that seeks to enhance female participation in mountaineering activities in the Alps. The groups met and came together to discuss their potential meet and exchange during the course of 2015, realizing their first encounter in Bolivia just last August 2016. The exchange was divided into three parts: a stage of rock climbing in the Cordillera de Quimsa Cruz, another stage of glacier and alpine climbing in the Cordillera Real and a third stage involved activities with the community, such as seminar talks at a local university in the city of La Paz, and a ‘mountain experience’ event with teachers and facilitators of the municipal program for school girls, “I am my first love.” The first stage at Quimsa Cruz was carried out between 28 July and 7 August, hosted by Andean Experience, who provided a memorable experience with great scenery and superb granite traditional rock climbing. The peaks and walls are remotely located at altitudes between 4,500m and 5,500m, meaning that climbing in this area is very challenging. The base camp was established at 4,400m, requiring a daily walk of approximately two hours to reach the crags. The roped teams achieved new routes and a climb up the Torrini Peak, located in a passage between the valleys of Teacota and Taruj-Umanya.

The second Cordillera Real stage took place from 10 to 19 August, with alpine routes established along Chachacomani (6,100m), Jan’qu Uyu (5,520m) and Jisk’a Pata (5,510m) peaks. The village of Peñas was the access point to these mountains, located one hour from La Paz, where an area of much potential for rock climbing also exists. To climb Chachacomani required two camps, one at 4,650m and a high camp at 5,200m, while for Jisk’a Pata and Jan’qu Uyu basecamps were established at 4,700m. On 22 August both teams arrived back in La Paz for the third stage, where activities to close the encounter included a seminar talk to university students at the Bolivian Catholic University “San Pablo”, under the theme of “La Paz is Mountain”. The talk was about sharing the experiences had during the exchange, as well as discuss topics of relevance such as mountain protection and climate change impacts on current snow and glaciers in Latin America, for which Dr Carolina Adler (UIAA Mountain Protection Commission President) was invited to present on the topic.

Four members of the Mujer Montaña team spoke about their lives in the mountains, with seminar proceedings ending with the audience signing a pact with the mountains, promising to act responsibly and sustainably with the mountains. Finally, on 23 August, a motivational departure event was carried out with the teachers and facilitators of the municipal program for school girls titled “I am my first love”, where participants were taken to the glaciers of the Huayna Potosi peak in the outskirts of La Paz. Here, participants experienced a mountain approach and ice climbing. The “I am my first love” is an educational program and social campaign for violence prevention, working with adolescent girls to empower and promote self-esteem in women. For more photos and reports on the exchange, see Mujer Montaña’s post about the event on Facebook.

The next steps for the teams will involve the editing and production of the documentary film, to be carried out by Studio Solidarias Images (France), as well as showcasing clips from the film at the upcoming INKAFEST – International Festival of Adventure and Environment during its tour in Bolivia in October 2016. Mujer Montaña is now busily coordinating its next all-female Latin American climbing event, its fourth edition, which will take place in November 2016 in Ecuador (for more information about that event, please email mujermontania@gmail.com). UIAA Mountain Protection President, Dr Carolina Adler, participated as an invited guest for the Jan’qu Uyu climbing expedition, as well as the closing community activities in La Paz. The exchange had the support of the Municipal Tourism Development Agency of La Paz (Bolivia), and mountain equipment brands like Petzl, Millet, Makalu, Nemo, and Julbo. Tourism agencies that supported the logistics included Terra Andina, Andean Secrets, Andean Destination, and The Wall Climbing Center. Public institutions such as the Autonomous Government of the City of La Paz, the municipality of Peñas, Ville de Grenoble, are also acknowledged for their support. Other contributions from Lyo expedition, Equitalge, Carú: Venezuelan Mountaineering, Tingeerlat, and Ifremmont.

About the UIAA Mountain Protection Award

Now in its fourth year, the UIAA Mountain Protection Award continues to grow as an internationally-recognised forum for projects, companies and initiatives which support sustainable tourist practices in mountain regions. The winner of the 2016 edition will be announced at the UIAA General Assembly in Brixen, Italy on Saturday 15 October.