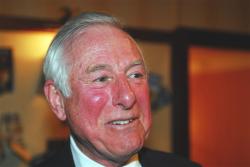 Robert Pettigrew awarded Member of the Order of the British Empire

Former UIAA Access Commission president Robert Pettigrew has been awarded the Member of the Order of the British Empire for outstanding service to the community and local “hands-on service” which stands out as an example to other people.

Renowned mountaineer Doug Scott who is a member of the UIAA Traditional Values Working Group (TVWG), and has know Robert Pettigrew since 1956 as an aspiring young mountaineer teaching rock climbers to beginners was one of those who wrote letters of support for Pettigrew.
Back then Pettigrew coached the Nottingham Moderns RUFC of which Scott was a member.  He did this for a number of years in a voluntary capacity.
Scott noted that Pettigrew volunteered his services to climbing in many significant ways.
Pettigrew has been Chairman of the Mount Everest Foundation 1980-1996, the UK Honorary Secretary of the Himalayan Club 1986-2012, Chairman of the CCPR 1997-1999 and President of the British Mountaineering Council 1974-1977.
During his Presidency, Pettigrew managed the move of the BMC headquarters from London to Manchester and with the help of Lord Hunt assured a successful conclusion to the dispute about mountain training that threatened to engulf the BMC and British Mountaineering at the time.
Pettigrew was also President of the Access Commission of the UIAA – International Climbing and Mountaineering Federation (2000-2010) – the International, global umbrella organisation for mountaineering.  Internationally, he was involved in the former Inter-Sports Group of the European Parliament, a useful means of protecting mountaineering freedoms from threats at European level.
“What identifies Pettigrew above all is his concern that high standards should be maintained by all others volunteering their services in public life.  He was most effective in re-establishing good governance in the CCPR at the behest of HRH Prince Philip,” said Scott.
“Pettigrew greatly assisted those of us on the Management Committee of the UIAA with his considerable expertise on governance, to reform the Executive Board to the extent that the UIAA now has a new President and Board that have already put the UIAA back on a sound financial footing and with greater transparency,” said Scott.

“The UIAA is now executing a sound strategic plan, to the benefit of climbers’ worldwide thanks to the tireless efforts of Robert Pettigrew, working behind the scenes and without any expectation of recognition or reward.”