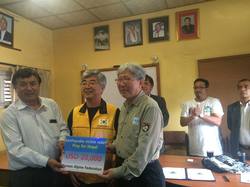 UIAA member federations reacted with horror and sorrow as news broke that once again, tragedy has struck the climbing season on Mount Everest and the people of Nepal.

Within moments of a weekend earthquake that has killed thousands of people across the country, with the death toll expected to rise even more, UIAA members were in touch with climbers, friends and family to ensure that loved ones were safe.

They’ve also begun fundraising efforts to ensure that funds are available to those in immediate need, and for the long-term reconstruction of the country.

“What happened in Nepal, and on Everest and so many other mountains across the Himalaya breaks our hearts,” said UIAA president Frits Vrijilandt. “The Nepali people are our friends, and this tragedy touches us not just as climbers and mountaineers but as human beings.”

“The UIAA is in touch with the Nepal Mountaineering Federation and with members of the UIAA Medical Commission including Dr. Kami Sherpa and Dr. Buddha Basnyat to develop a sustained plan to help those who are injured and need help,” said Vrijlandt.

The Nepal Mountaineering Association (NMA) says the avalanche triggered by the earthquake killed19 people at Everest Base Camp, with 14 of those killed being Sherpa. Five were foreign climbers and there are over 65 injured.

“We are at the hardest moment of our history and our alone effort is not enough to come out from this tragic moment,” said NMA President and UIAA Honorary Member Ang Tshering Sherpa. “Messages, support and wishes expressed to us from all around the world help us to console at this heartbreaking time.”

As rescuers reach remote villages, word has emerged that there is utter devastation in areas familiar to UIAA members such as the Langtang Himal and other mountainous areas.

“We have requested all UAAA members to send a condolences letter to the NMA and donations as we did for the Pakistan flood victim in 2011,” said UIAA Management Committee member Christine Pae (Korean Alpine Federation) and General Secretrary of the Union of Asian Alpine Associations (UAAA).

She said the Korean Alpine Federation has already collected tents, blankets and mattresses for the coming monsoon season which will be delivered by a direct flight, along with money collected from member federations and clubs.

Pae said money is being collected until the middle of May, but fundraising efforts will continue long after.

Fundraising efforts by UIAA members and federations include:

Community Action Nepal (CAN) is a UK-based charity whose aim is to help the mountain people of Nepal. Founded by UIAA Mountaineering Commission member Doug Scott CBE, who in 1975 made the first British ascent of Everest. CAN supports remote mountain communities with over 40 projects. Many of the communities that CAN supports have been affected by Saturday’s earthquake, and they have launched an appeal to help.

Alex Lowe Charitable Foundation is an American charity based out of Bozeman, Montana. The president is Jennifer Lowe-Anker and the charity involves world renowned climber Conrad Anker. The charity is dedicated to preserving Alex Lowe’s legacy by providing direction and financial support to sustainable, community-based humanitarian programs designed to help the people who live in remote regions of the world. This foundation carries on Alex’s spirit of adventure and they too have launched an appeal for help.

The Italian Alpine Club (CAI) has opened a fundraiser to help those affected. For those wishing to join the subscription an account was started FUNDRAISING “THE CAI FOR NEPAL” at the Banca Popolare di Sondrio – Agency 21 Milan – IBAN IT 76 W 0569601620000010354X93.

REFERENCE:  (your) SURNAME + NEPAL   (this is very important please). For audit and balancing purposes it is important to send proof of payment to the Co-ordinator Jenny Paterson: jennyapaterson@gmail.com  .
A wall of snow heads towards Everest Base Camp during an avalanche that was triggered by an earthquake and killed thousands of people across Nepal (Photo: Roberto Schmidt/AFP/Getty Images)
Share: