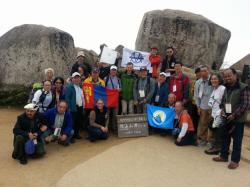 The Union of Asian Alpine Associations (UAAA) is 20-years-old and the special birthday was celebrated in grand style at the group’s annual General Assembly held in Hiroshima Japan.

In a message celebrating the 20th anniversary of the body, In-Jeong Lee, president of the Korean Alpine Federation (KAF) and the UAAA said the group had come a long ways and played a crucial role in strengthening the diversity of the UIAA – International Climbing and Mountaineering Federation.

“The UAAA has become like a family, experiencing and sharing happy and tragic things alike since its foundation in 1994,” said Lee. “To commemorate our 10thanniversary, we published a UAAA booklet. We received major support from the NMA for our 20th anniversary with the christening of UAAA Peak in the Nepal Himalaya.

“Our recent increase in new memberships since last year has helped our organization to expand and become firmer,” said Lee. “We owe the past twenty years of achievements to the constant participation and interest of all of our members.”

Among the achievements of the UAAA that he listed included the cooperation which resulted in the construction of an international mountain museum in Nepal and cultural exchanges which have “deepened with greater opportunities for discussion about activities such as nature protection, prevention and counter high mountain climbing accidents, rescue training, promoting mountain climbing to the youths, promoting and planning Asian joint expedition and competition.

“Let’s make the next 20 years better with our great history of the past two decades,” Lee continued. “Time seems to fly by so fast, and it has already been 20 years since the UAAA was founded. Celebrating today’s 20thanniversary is certainly an inspiring day, without a doubt.”

Christine Pae of the KAF said delegates visited the Peace Park in Hiroshima where they renewed their pledge to “extend our gratitude and reverence to mountains” and “work with our best efforts to reduce strain on mountain areas and to preserve their environment.” The full text of the Hiroshima Declaration can be found here.

Earlier this year, the UAAA organised a joint expedition to UAAA Peak (6476m) in Nepal and a rescue training session in Mt. Tanigawa in Japan.

Honorary UIAA Member Kazuo Saito of the Japan Mountaineering Association initiated the establishment of the UAAA in 1993 to promote climbing in Asia and the UIAAs regional activities.

Today, members of the UAAA participate fully in the activities of the UIAA which was represented at the assembly by President Frits Vrijlandt.

For more information on the UAAA please click on this link.