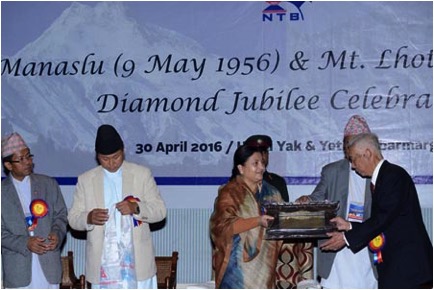 The first ascent of Mt. Manalsu and Mt. Lhotse was celebrated amidst a grand function in Kathmandu on 30 April. Rt. Hon’ble President of Federal Democratic Republic of Nepal Mrs. Bidya Devi Bhandari, was the Chief Guest of the Diamond Jubilee Celebration of the First Successful Ascent of Mt. Manaslu and Mt. Lhotse program. At the programme jointly organized by Government of Nepal and Nepal Mountaineering Association, was attended by a galaxy of luminaries from different walks of life including high government officials, prominent mountaineers and foreign diplomats. The main attraction of the program was legendary mountaineer and first successful summiteer of Mt. Manaslu summiteer in 1956 Mr. Minoru Higeta, the only survivor of the first successful summiteer of the expedition team.

At the programme the Chief Guest Rt. Hon’ble President Bidhya Devi Bhandari highlighted the role of mountain tourism in Nepal. President Bhandhari also expressed confidence that the recommendations to be furnished by experts during the mountain conference will be important in mitigating the impact of climate change.

On the occasion, the president paid tribute to national and international mountaineers, researchers and guides, who lost their lives during mountaineering expeditions.

Mr. Higeta was felicitated by Rt. Hon’ble President, Mrs. Bidya Devi Bhandari in the program. Other summiteers and organization felicitated were as follows:

1.   Mrs. Pasang Lhamu Sherpa for her contribution in the field of mountaineering tourism development by Rt. Hon’ble President

2.   Recognition of Himalayan Trust for their generous support of providing scholarship for deceased mountaineers children by Rt. Hon’ble. President

3.   Recognition of UN World Food Programme for their generous works in mountain regions of Nepal

On the occasion, Mr. Minoru Higeta expressed that “Sixty years ago, I stood on top of Mount Manaslu,” exclaimed Mr. Higeta in the function adding that his team was fortunate to be blessed by fine weather and strong support from Nepali Sherpas. Similarly, Japanese Ambassador Masashi Ogawa said that Japanese expedition’s successful ascent of the mountain, located in west-central Nepal gave courage and hope to the Japanese people who at that time were demoralized by their defeat in World War II.

Similarly, Chairman of the Organizing Committee and Secretary of the Ministry of Culture, Tourism and Civil Aviation Mr. Prem Kumar Rai express his belief that the conclusion of the conference would be helpful in tackling the effect of climate change.

Likewise, Member Secretary of the Organizing Committee and NMA President Mr. Ang Tshering Sherpa said the Diamond Jubilee Celebrations would help reinvigorate the tourism industry and its sub-sector by disseminating a positive message that Nepal is safe destination. To commemorate Mt. Manaslu and Mt. Lhotse Diamond Jubilee Celebration 2016, a conference was also organized on the theme “Challenges and Opportunities to promote mountain tourism in Manaslu and Lhotse Area” in which Mr. Sonam Lama and Ms. Lhakpa Doma Sherpa gave their presentation on Mt. Manaslu and Mt. Lhotse respectively. The conference was mostly dwelled on challenges and opportunities in Manaslu and Lhotse area by the mountain climber. Mr. Ang Tsering Sherpa, Member Secretary of Organizing Committee and President of Nepal Mountaineering Association also made a special remark on the paper presented there.

Earlier in the morning, a colorful procession was taken from Tundikhel, which ended at the Narayanhiti Palace area. The Chief of the Kathmandu Metropolitan City felicitated Mr. Minoru Higeta at the civic reception at Narayanhiti Palace Museum. Mrs. Junko Tabie, first woman summiteer of Mt. Everest was also present. High level government officials, national and international Manaslu and Lhotse summiteers, renowned climbers, mountaineering and mountain related organization NGOs and INGOs and other tourism related organization participated during this procession.

Mount Manaslu, the eighth highest peak in the world, was first scaled in May 9, 1956 whereas Mount Lhotse, the fourth highest, was scaled in May 18, the same year.

This is a press release published by the Nepal Mountaineering Association.