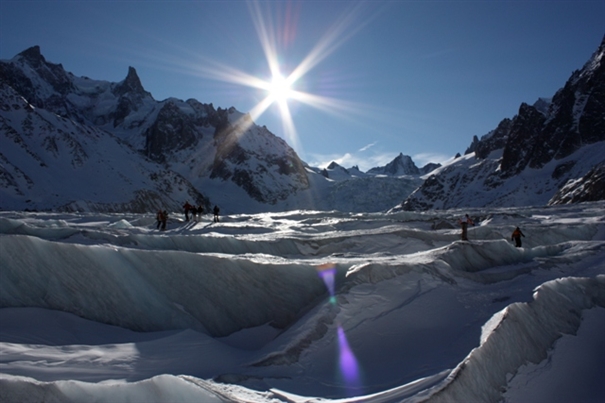 Steve Hartland has become the first known Brit to complete the UIAA list of 82 peaks over 4,000m in the Alps, an achievement that has taken over 30 years to complete. John Allen takes a look the history surrounding this incredible feat.

The ambition of Steve’s to climb all of the 82 Alpine peaks over 4,000m was first realised back in 1982 as a young Alpinist. Over the years he continued to tick peaks of the UIAA list until his aim bordered on becoming an obsession.

Now age 53 and a fully qualified mountaineer guiding from his base in Chamonix, France, he has found that continuing an adventurous personal climbing life has been an invigoration for his often somewhat repetitive professional guiding (i.e. he has ascended Mont Blanc over 30 times).

And this year, in August 2016, Steve returned to the Grand Combin in Switzerland where he’d already climbing the highest summit (Combin de Grafeneire, 4,314m) to tick the summit he’d missed on the previous trip, the Combin de Tsessette, 4,141m. Standing at the top, he realised his goal of completing all 82 peaks was finally complete.

Lists of 4,000m peaks in the Alps have been in circulation since the Austrian, Karl Blödig, wrote of 76 peaks in 1923. Subsequently refined down, the Englishman, Robin Collomb, itinerant alpinist, artist of mountains and guide book publisher (West Col), wrote ‘Mountains of the Alps’ in 1971 with a list of 439 summits over 3,500m. 52 of these were over 4,000m and this book (or more cheaply, photocopies of just a few relevant pages by impecunious Brits) became the bible pages for British Alpinists until the 1990s when the UIAA published their definitive list of 82 in 1994.

Coupled with Diadem’s ‘The High Mountains of the Alps’ (Dumler and Burkhardt, and Ken Wilson, 1994) and Richard Goedeke’s guidebook (1998), lists began to multiply. These descriptions, largely following the Collomb list of 52, can be undertaken by any reasonably fit person with a keen motivation, whereas the UIAA list of 82 will require the highest levels of Alpine mountaineering ability and commitment.

Until Steve Hartland completed his odyssey of 82, notable earlier ascents by guides Martin Moran and Simon Jenkins included 75 in a single traverse of 52 days in the summer of 1995.

Since the 1970s mountaineers have had to battle with the ever-changing nature of glaciers and snowfields, with wider crevasses, open bergschrunds and climate warming, and even of the relaxation of the grip of permafrost that acts as the glue to stick the highest and most prominent summits together. Sometimes enormous rockfalls can result.

Such conditiions will continue to challenge our mountaineers in the Alps and beyond.  Well done Steve. Best wishes to future adventurous mountaineers.

Further Reading:
The full list of the 82 UIAA recognised 4,000m Alpine peaks can be found here.