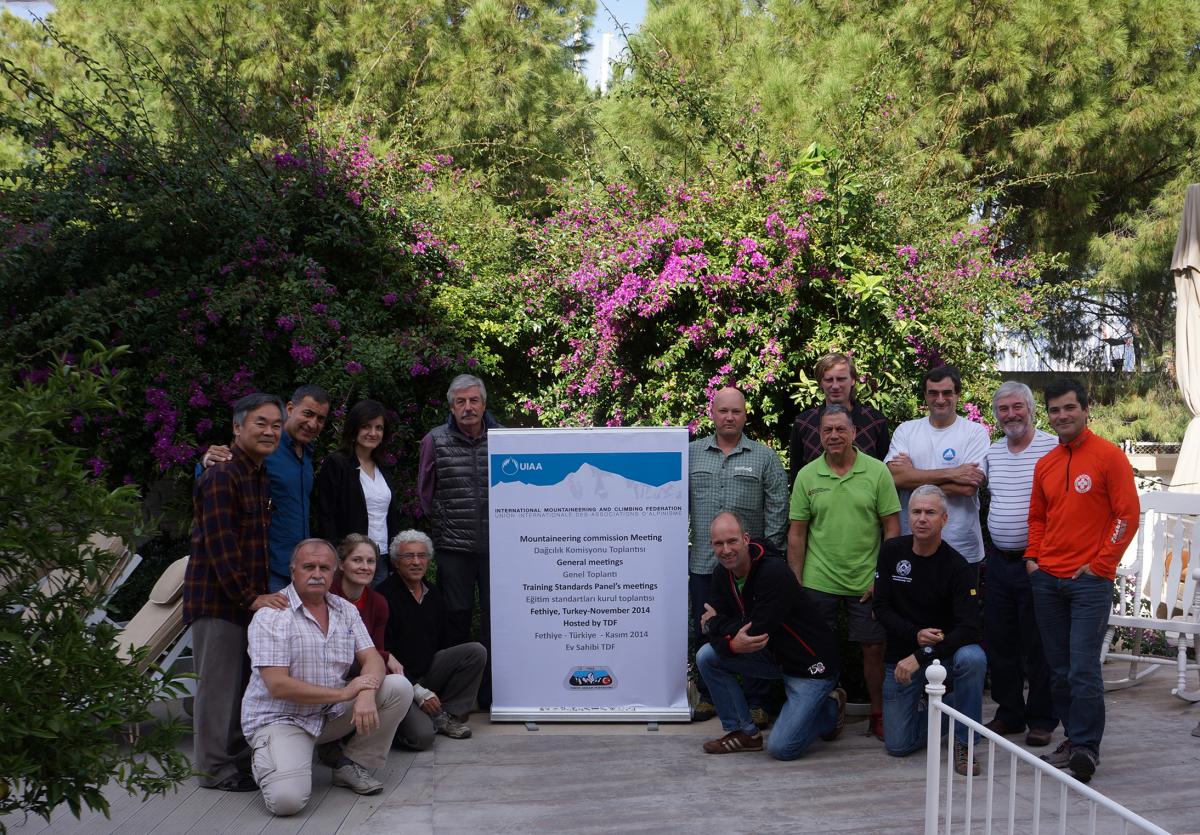 An online registration system for the UIAA Training Standards certification program and a new Near-Miss Survey to be developed alongside a proposed Global Accidents database were among the issues tackled at the annual meeting of the UIAA Mountaineering Commission.

Commission members who attended the meeting, which was held in Fethiye, Turkey also discussed several other projects including a proposed news scale for via ferratas and a working document with the working title “Freedom in Mountaineering.”

Training Standards
Much of the new training standards system which was developed by the UIAA office with the Training Standards Panel is already up and running, with new modules being added as soon as they are ready.

When finalized, the system will make it easier to administer the accreditation application and renewal process, and the ease with which members can apply. Members will be able to apply for certification and track their progress through their member login for the UIAA website.

“The development of an online administration system is a crucial part of the strategic plan for this truly global enterprise,” said Steve Long of the Training Standards Panel. “Now federations will be able to take control of the progress and also demonstrate to other stakeholders their commitment to developing and maintaining the quality of their qualifications programmes.”

Pierre Humblet, president of the UIAA Mountaineering Commission, said the commission also hoped to, in the very near future, start a Near Miss Alpine Survey with the Petzl Foundation.

The survey would be developed alongside and tested with the UIAA’s proposed worldwide accidents database. The Global Accidents Database is being developed with statistics provided to it on a voluntary basis by UIAA federation members, and is the brainchild of Professor Chiaki Aoyama of Japan.

Aoyama worked with Humblet, an insurance specialist lawyer, to develop a database that could help insurance companies better understand risk in mountain activities.

“The Near-Miss Survey is different (from the Global Accidents Database) because this is about accidents which did not happen per chance but remained only “incidents”,” said Humblet. “This near miss survey is much more focused on prevention.”

One of the experts who will work with the UIAA in developing the survey is Corry Jackson of the Alpine Near-Miss Survey.

The group defines a “near-miss” as “an unintended, unsafe situation that could have resulted in injury but for a lucky intervention.” Near-misses, the group said, are catalogued because studies show they outnumber accidents 10-1 which gives a bigger pool of accidents to study.

“Studying near-misses may also identify unsafe trends before they result in accidents,” the group says.
Via Ferrata scale

The commission also discussed the idea of developing a new difficulties scale for Via Ferratas that will compare existing scales. Currently, there are multiple scales used in various European countries including two in Italy, two in Germany and one each in Austria and France.

Commission members are working on draft version of a document, which explores the ethical aspects of Freedom in Mountaineering. Humblet said  the draft should be ready for the group’s meeting in the spring of 2015 in Osaka, Japan.

Humblet said the goal of the document is to fight the trend which restricts mountaineering activities, especially for young people, because of potential dangers by underling the positive aspects of climbing and mountaineering.

The paper is in part inspired by the work of Grivel’s product and safety consultant Maurizio Gallo who reflected last year in an interview published on the UIAA website about safety and mountaineering.