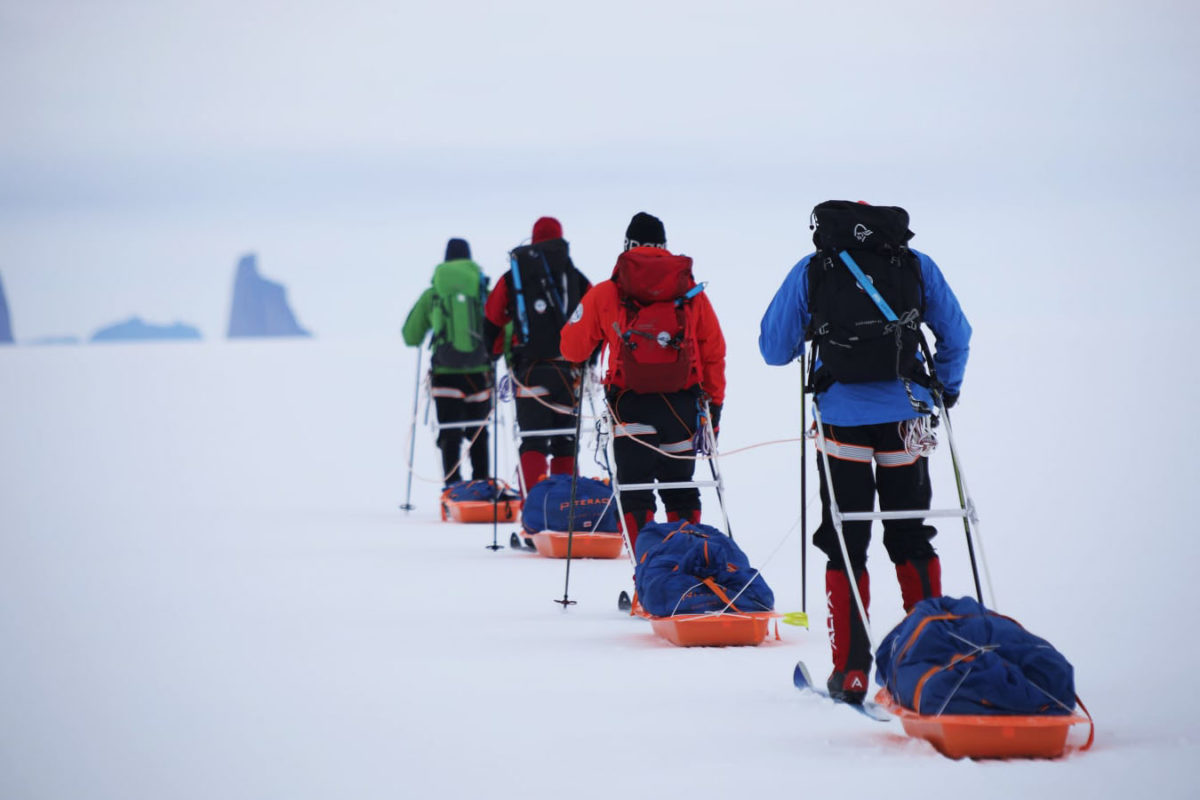 As part of its commitment to raising awareness about the importance of preserving natural rock and to reducing indiscriminate bolting, the UIAA is sharing an article from Norwegian climber Robert Caspersen concerning an expedition made in late 2017 with three friends to climb the high east face of Gessnertind (3020m) in Antarctica. The article is published on the Norrøna Sport website.

The article was brought to the UIAA’s attention by former UIAA Management Committee member and legendary mountaineer Doug Scott, who spearheaded the UIAA’s seminal paper on ‘UIAA Recommendations on the Preservation of Natural Rock for Adventure Climbing’ in 2014. The paper evaluated the history and appeal of different forms of rock climbing, and considered earlier attitudes to fixed gear. It also considered how the case for adventure climbing can be re-stated more effectively and offered guidance to UIAA member federations in developing countries on how to sustain the balance between sport and adventure climbing.

“The article written by Robert Caspersen is exceptionally inspiring and cannot fail, I am sure, to move people towards at least thinking of restricting the use of the bolt,” explains Scott.

Gessnertind had only been climbed once before, in January 1994 by Sjur Nesheim, Jan-Åge Gundersen and Caspersen himself. That ascent took about twelve hours via the easiest way they could find: steepening snow up the northwest ridge, traversing into the north flank and rock climbing to the summit.

A core part of Caspersen’s story outlines a key juncture in their 2017 attempt: ‘After nine days of intense work on the wall everything suddenly came to a halt! A few days earlier we had established our second port-a-ledge camp, on top of our ninth pitch. From there we had fixed another three pitches, to reach the top of the main pillar, just over five hundred meters above the ground. We still had food for ten days left and we were in a fantastic position. Everything was going well, we were in the zone. All our focus and energy was going up this mountain, but then suddenly everything changed. What happened?’

The expedition team discovered that the rock formations they depended on to climb and to protect themselves just suddenly ended and vanished. Caspersen continues: “During our scouting from the ground with binoculars, there was one short section in the middle of the face where we could not see any obvious cracks. But still, we had hoped that some small cracks – difficult to spot from a distance – would appear and lead us beautifully into the more obvious crack systems above. This often happens in the mountains. This time, it did not. There were clearly rock formations and opportunities, but not for us – as we considered it. The risk was too big. Our last belay was on a big ledge, and above us we were looking at fifteen meters of run-out climbing with no good gear on very fragile rock.” The four climbers were left with a decision to make and ultimately decided to end their pursuit of reaching the summit. “Backing off a major climb always leads to rumination, anguish and doubt; could we have done something different? Tried more? Up a different line? Am I loosing it, or was it a good call? Fortunately, we all four shared the same perception of the risk ahead, and the limits of risk we were willing to take on this trip.”

Reflecting on the expedition, Caspersen concludes: “The number of people climbing has exploded in recent years, while the worlds resources of unclimbed mountains and walls, is diminishing rapidly. If we today choose to bolt in the mountains where we find it difficult or too dangerous, we risk depriving future generations of their possibility to experience these ultimate climbing challenges. What’s left to dream of and to explore for climbers in fifty or a hundred years, if we consume all virgin mountains now?

Background: UIAA Recommendations on the Preservation of Natural Rock for Adventure Climbing’

A paper first published by the UIAA in 2014. The document, led by Doug Scott, evaluated the history and appeal of different forms of rock climbing, and considered earlier attitudes to fixed gear. It also considered how the case for adventure climbing can be re-stated more effectively and offered guidance to UIAA member federations in developing countries on how to sustain the balance between sport and adventure climbing. An earlier attempt to strike a balance was put together in a document “To Bolt or Not to Be” by Robert Renzler and his team which was approved by UIAA Council in 2000.

Since indiscriminate bolting continued Scott and his team made this further attempt to preserve rock for trad climbing where appropriate and with extended Appendices. The Appendices offer the views of leading climbers and climbing thinkers on how progress can be made in reaching a more balanced approach to meeting the needs of adventure and sport (specifically rock climbing on bolted routes) climbers and the environment.

Download: ‘UIAA Recommendations on the Preservation of Natural Rock for Adventure Climbing‘.