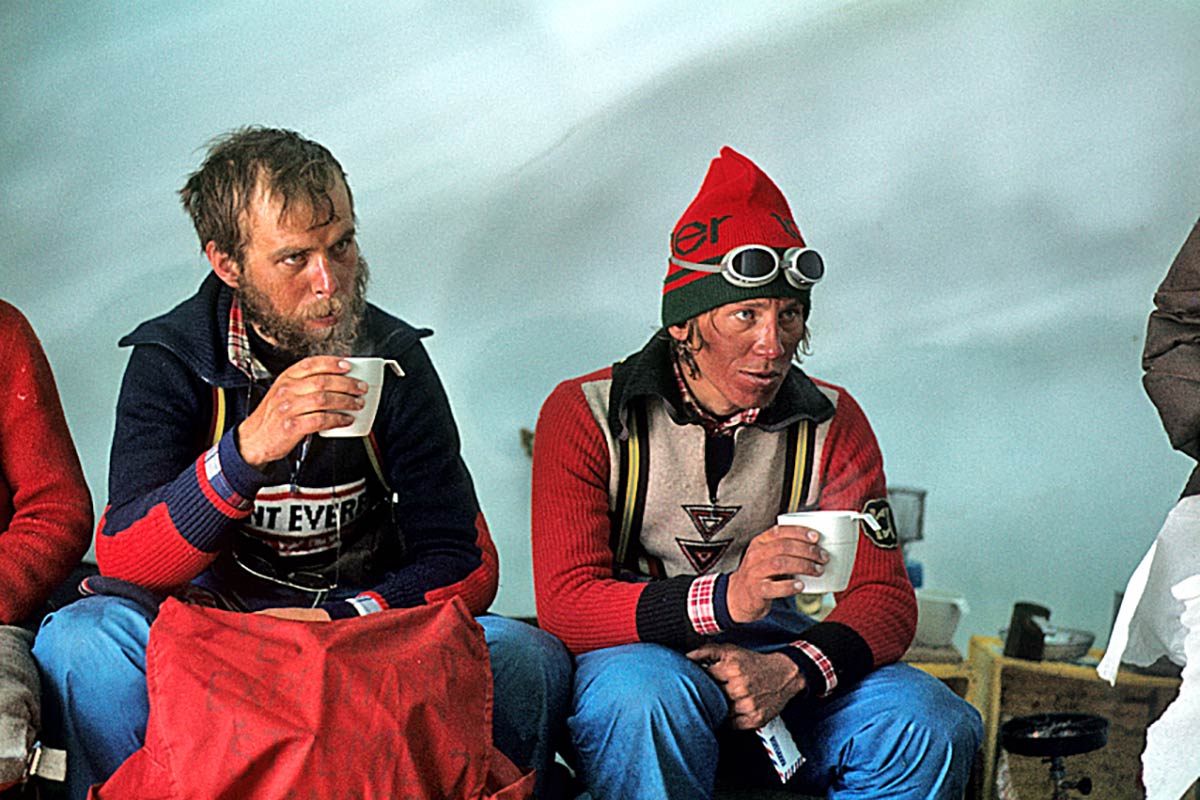 On 13 May, 1979 at 13.51 Nepalese time, two Slovenian members of the ‘First Yugoslav Alpine Expedition Everest 1979’, succeeded in ascending and reaching the top of the highest mountain in the world. They were Jernej (Nejc) Zaplotnik and Andrej Štremfelj.

The climbers were both members of the Alpine Club Kranj and Alpine Section Kranj. The expedition was organized by Planinska zveza Slovenije (PZS) – Alpine Association of Slovenia under the leadership of an excellent alpinist and ‘Himalayan’ Anton Škarja. The ascending of ‘The Slovenian Everest’ was the first ascent over a new climbing route along a very demanding north-west ridge, which is even nowadays regarded as the most difficult ascent to the top of Everest and has not yet been repeated.

The expedition Everest 1979 comprised 25 excellent alpinists, the same number of sherpas and required 25 tonnes of equipment. They had to contest hurricane-force winds, the cold, a lack of oxygen and the difficult rocky-ice western ridge. It took a total of 45 days to reach the top of Everest.

Two days after the ascent on 13 May, the summit was reached by three more members of the expedition: Stane Belak, the Croat Stipe Božič, and the excellent sherpa Ang Phu, who unfortunately died in a terrible storm on the descent.

Profiles: First on the Summit

Zaplotnik died in a rocky-ice snowslide under the summit of Manaslu. He had climbed three +8000m mountains: Makalu, Gasherbrum, Everest and completed more than 350 ascents in Europe, Africa, North America and Asia.

In his hometown of Kranj, a memorial plaque was unveiled in 2013 and the Municipality of Kranj honoured him posthumously as an honorary citizen.

Sportsteacher, alpinist, mountain guide. With his extreme ascents he is rated among the best alpinists and ‘Himalayists’ in the world. He has reached eight +8000m peaks, including Everest, Makalu, Gasherbrum I, Broad Peak, Gasherbrum II, Shisha Pangma, Kanchenjunga, Cho-Oyu and Daulaghiri. When ascending to the top of Mount Everest for the second time with his wife Marija, she became the first Slovenian female to reach the top of Mount Everset, and they became the first married couple on Everest.

Andrej Štremfelj is a revered personality in the world of alpinism. He received the inaugural Piolet d’Or, one of the most prestigous prizes in the world of alpinism, organised by French alpine magazines Montagnes and The Groupe de Haute Montagne in 1992. Štremfelj holds two Piolet d’Ors, the first one he was awarded for his first ascent on south pillar of Kanchenjunga, the second one a lifetime achievement award in 2018. Previous recipients of this Award include Walter Bonatti, Reinhold Messner and Kurt Diemberger.

The PZS has been celebrating these milestone achievements of Slovenian alpinism with different events. In February 2019, The Alpine Film Festival was held in the capital Ljubljana, when 13 surviving members of the Everest 1979 expedition greeted the audience, before Štremfelj gave an inspiring talk on that event and other ascents he has made in the Himalayas.

The central event ’40 years of the Slovenian Everest’ took place in the Alpine Museum of Mojstrana on 13 May at 13:51, exactly at the time when Zaplotnik and Štremfelj stepped on top of Mount Everest to make history of their country.