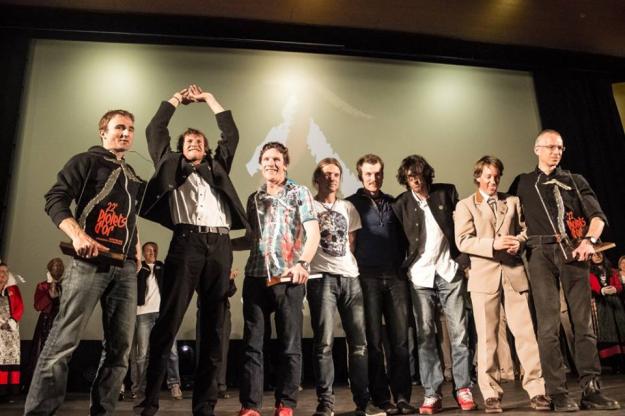 Raphael Slawinsky, Ian Welsted and Ueli Steck are winners of the 2014 Piolet d’Or which was announced in Courmayeur, France on 29 March 2014. Slawinsky and Welsted made the first ascents of the northwest face of K6 in Pakistan and Steck was honoured for his solo ascent of the south face of Annapurna in Nepal.

The Piolets d’Or 2014 goes to Raphael Slawinsky and Ian Welsted for Northwest Face of K6: This year’s Piolets d’Or goes to a previously unclimbed summit, the target of several earlier attempts. The team was confronted with difficult technical climbing, including an overhanging ice crux. On the fourth day they realized they couldn’t continue on the ridge as it turned out to be a knife edge of smooth granite. After careful consideration they found another possibility, rappelling to a glacial bench on the south side and climbed back up the ridge above the unclimbable section to continue to the summit.

The Piolets d’Or 2014 goes to Ueli Steck Annapurna South Face Solo: After reaching the final bergschrund, one of the members of this team thought the risk too high so the sole remaining climber had to face it alone. In climbing the face alone, he subjected himself to maximum exposure. Despite not knowing what was awaiting above the 6500 meters, he managed to complete the unfinished route of Pierre Béghin and Jean-Christophe Lafaille (of 1992). Achieving a first ascent on this wall, climbing alone, in very rapid alpine style seems to be a new dimension in high altitude climbing.

Also honoured for a lifetime of climbing achievements was well-known American climber John Roskelley.
Roskelley received the 6th Lifetime Achievement Piolets d’Or, the “Walter Bonatti” prize.
The Piolet d’Or website notes the “Career Piolets d’Or was created to reward a career where the spirit has inspired the following generations, in the sense of criteria set down by the convention.
In 2009, the first was given to Walter Bonatti followed by Reinhold Messner 2010, Doug Scott 2011, Robert Paragot 2012 and Kurt Diemberger 2013.”
Piolet d’Or organizers said here that Roskelly made many difficult and accelerated ascents at high altitudes:

John Roskelley, at this time, was a curiosity of sorts. He accumulated difficult ascents at high altitude with an accelerated rhythm. 1976 proved to be the kingpin of the immense north west face of the Nanda Devi 7816m. The stories tell of his endurance, efficiency at altitude, and his huge character. In 1977, he succeeded in the first Grand Tour of Trango 6286m with Galen Rowell, Kim Schmitz and Dennis Hennek. The following year, after attempting the north face of Jann , roped in a pair, on K2 8611m, he was the first to climb the north east ridge, a long route which remains rare. The Americans, under the direction of Jim Whittaker, didn’t use oxygen, nor carriers at altitude.