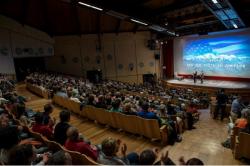 The Trento Film Festival is the oldest film festival dedicated to the mountains, adventure and exploration

The Trento Film Festival, the oldest film mountain film festival and the UIAA, the international global organization for climbing and mountaineering have partnered to honour the best in film dedicated to the mountains, adventure and exploration.
The festival takes place 30 April – 10 May 2015 in Trento, Italy and this year’s evnt will include a new award, the UIAA Award For the best climbing in film about rock, ice or sport climbing.
The winner will receive a prize of 1,500 Euros for a film chosen by a jury headed by UIAA – International Climbing and Mountaineering Federation President Frits Vrijlandt.
“We are honoured to be able to participate in a film festival which for decades has recognized the best in mountain, adventure and exploration films,” said Vrijlandt. “The award is our small way of recognizing those who spend countless hours documenting the sport that we love.”
The Trento Film Festival has been in existence since 1952 and is part of the Alliance for Mountain Film which includes 22 members and 21 festivals that take place in 17 countries across Asia, Europe and the Americas.
These festivals include the Kathmandu International Film Festival, Banff International Film Festival, Kendal Mountain Film Festival, Taos Mountain Film Festival and the Festival Internacional de Cine de Montana.
A founding member of the Trento Film Festival was the Italian Alpine Club, a member federation of the UIAA.
The festival’s Honorary Members include Walter Bonatti who is also Honorary Member of the UIAA.
The deadline for submitting films for the UIAA Award For the Best Climbing in film about rock, ice or sport climbing is 20 February 2015.
Share: