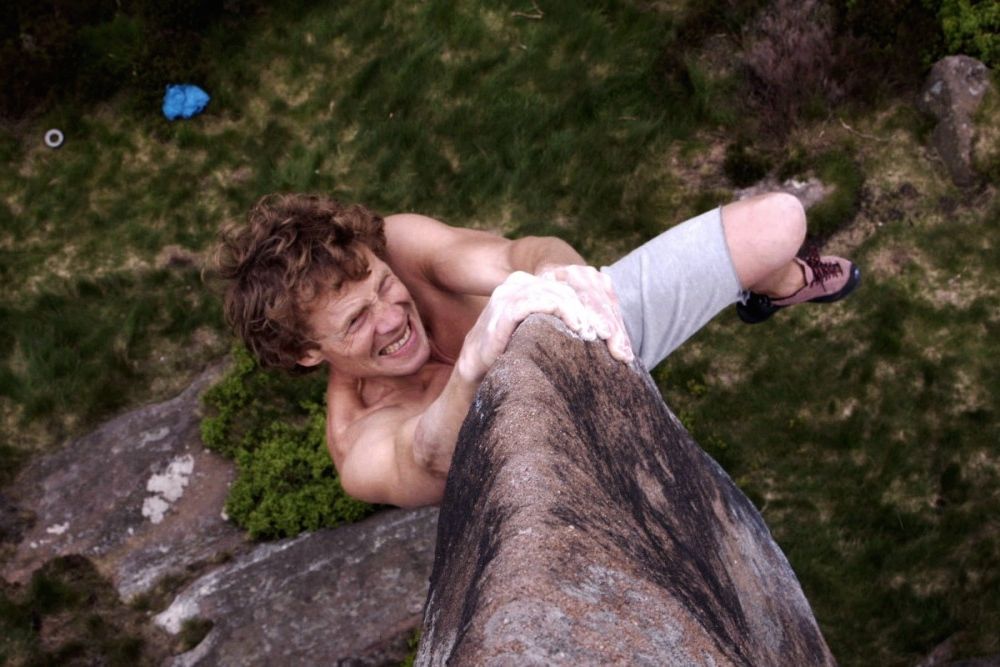 The countdown has begun for the Trento Film Festival.

The big moment is on 9 May 2015 when UIAA Executive Board member Pier Giorgio Oliveti will announce the first winner of the UIAA Award for the best in film which captures the values of the UIAA and its commitment to the to the mountains, adventure and spirit of exploration.
The winner will receive a prize of 1,500 Euros for a film chosen by a jury headed by UIAA – International Climbing and Mountaineering Federation President Frits Vrijlandt. It’s all part of a larger celebration of film which takes place 30 April – 10 May 2015 in Trento, Italy.
We’ve put together the mother of all lists for all  the films that the jury will be considering for the UIAA Award and their trailers available.
In no particular order they are:
Sufferfest 2: Desert Alpine, AKA, 34 pieces of choss and 5 horrendous life experiences – Cedar Wright (U.S.A)
After having climbed the tallest peaks in California, Alex Honnold and Cedar Wright get back on their bikes to reach the region of the Four Corners with the scope of climbing the largest possible number of desert towers. The destination of their journey is the Navajo reservation, where the two will install a series of solar systems to provide the natives with an important source of clean energy and underline the bond linking climbing and care for nature.

Drawn – Jeremy Collins (Canada)
After the tragic death of his friend as the result of an avalanche, Jeremy Collins – artist, climber and new father – decides to leave for a journey to the other end of the world in search of the final meaning of the verb “to see” and four new climbing routes, one for each point of the compass, in an attempt to reconcile his great passions: art, adventure and the family.

Africa Fusion – Nic Good (Namibia)
We follow Alex Honnold and Hazel Findlay during a journey in South Africa, starting from the incredible pink granite rock faces of Namibia to arrive at the spectacular red rock of Waterval Boven. An itinerary exploring the natural and cultural treasures of this area, where the spectacle of two exceptional climbers is superimposed over the breathtaking beauty of the landscape.

Like all those from Geneva, Michel Piola also discovered climbing on the Salève, the great rock face just outside Geneva that has represented a training ground for so many climbers. For more than thirty years Michel has opened long climbing routes, completing a series of feats that have earned him the respect of the whole climbing environment. Passion d’ouverture recalls his life and feats, from Patagonia to Pakistan, Turkey and the Alps.

China Jam – Evrard Wendenbaum (France)
Continually in search of new peaks to climb, Sean Villanueva O’Driscoll, Nicolas Favresse, Stéphane Hanssens and Evrard Wendenbaum arrive in an isolated valley in China, where they find themselves in front of an incredible 1200 metre tall rock face. During the course of the ascent they have to face snowstorms and prohibitive conditions, without however abandoning the idea of finding a way to have fun.

Valley Uprising – Peger Mortimer, Josh Lowell, Nick Rosen (U.S.A.)
Starting from the 1950s, the peaks of the Yosemite Valley became one of the nerve centres of the American counterculture. Here Beatniks and vagabonds found the ideal setting for a lifestyle proudly opposed to consumerism, with climbing representing a perfect synthesis of freedom and tension towards the infinite. It was a place of great challenges, in terms of different ways of conceiving climbing and the conflict between bourgeois society and the search for freedom, but above all it was a place to challenge oneself. Valley Uprising recalls fifty years of challenges to the laws of gravity, making use of exceptional archive footage and an exhilarating sound track, treating viewers to moments of pure joy.

Zanzara e Labbradoro – Storie, mani e silenzi di Roberto Bassi – Lia Giovanazzi Beltrami (Italy)
After his journey to the Yosemite valley in 1979 Roberto Bassi discovered a new dimension of climbing: no longer peaks to be conquered, but rather extreme difficulties to be overcome with movements of the body, without any external assistance. Thus he also developed free climbing in Europe. Zanzara e Labbradoro gathers together the testimony of Roberto Bassi’s closest friends, who recall his story as a person and a climber, his decisive role in the development of free climbing and the changes to the culture of the mountains in the last few decades.

Petit Bus Rouge – Sébastien Montaz-Rosset (France)
Fearless, irreverent, crazy: there are no limits for the daring, globetrotting acrobats who cross Europe on board their picturesque red bus in a continuous search for new challenges. They take life and the world as if it were a single great circus, in which to concentrate on exploring joy, freedom and the search for happiness.

SOLO. Escalada a la vida – Jordi Varela Ciuda  (Spain)
Climbing a rock face does not just mean completing an athletic feat, because it requires above all exceptional mental and spiritual tension, during which we may be forced to face our deepest fears and our relationship with life. This is the experience that Jordi Salas looks for when climbing without any aids or protection: total mental control, capable of freeing up creativity and happiness.

The Frozen Titans – Bryan Smith David Pearson (Austria – Canada)
With a drop of 141 metres, the Helmcken Falls are among the most spectacular waterfalls in Canada. In winter they are transformed into a gigantic arena of ice, making the environment even more picturesque, if possible. Exploiting the low temperatures, the ice climber Will Gladd tried to climb the face of the falls, in extremely dangerous conditions.

Hansjörg Auer, Matthias Auer and Simon Anthamatten set off for a great goal: the Kunyang Chish East. With its 7.400 metre this summit belongs to the highest still untouched mountains on earth. The challenge is not only physical. They do not know what will be awaiting them in the higher walls, except altitude and cold. Bivouacs on isolated snow mushrooms or in crevasses, in order to be protected against the masses of the falling new snow, constitute a big mental challenge. The way to the summit requires a high capacity for suffering in all areas.

Jeff Lowe’s Metanoia – James Aikman (U.S.A.)
Metanoia is a term that indicates a revision of one’s thinking, a change of perspective. In Jeff Lowe ‘s life it has become the name of a route opened following his solo ascent of the north face of the Eiger, during which he underwent a profound inner transformation. Today a degenerative illness forces Lowe to move around in a  wheelchair, but has not succeeded in dulling the force that illuminates his gaze. His life, loves and incredible feats are relived in this film, thanks to extensive archive material, the testimony of his companions and the voice of Jon Kracauer.

Non è un sogno – Pierre Ponchione (Italy)
For more than six years Sara Grippo has lived with a disease that forces her to undergo frequent sessions of dialysis, but she has learned not to concentrate on the limitations that this situation imposes and to continue her life and discoveries with passion. Climbing has become more than just a sport, it is the personification of the challenges that Sara must deal with daily and a source of confidence testifying to the fact that she can overcome them.

Always Above Us – Eric Crosland (Canada – U.S.A.)
During an expedition to Tibet in 1999, Conrad Anker and Kris Erickson lost their companions Alex Lowe and David Bridges to an avalanche. The enormous snowslide on the southern face narrowly missed Conrad Anker, who however survived miraculously. To honour their memory and celebrate their accomplishments , Conrad and Kris decide to be the first to face the Nutcracker, an ice climb route in the Hyalite Canyon in Montana. It is a difficult opening but above all an opportunity to recount and recall a life made up of ascents and sacrifices, of joy but also pain.
L’inverno del vicino – Pietro Bagnara (Italy)
Two men prepare to climb a mountain in the winter. At daybreak they set off and begin their ascent of a magnificent and imposing face covered by metres and metres of snow and ice. It looks like a lost corner of the world, whereas they are in fact on the Fasana face in the Grigne mountains, just 20 minutes from Lake Como.
Der Zinnenmann – Christoph Hainz (Italy)
Christoph Hainz is one of the most eclectic climbers of his times, but his name is mainly associated with the Dolomites and in particular with the Tre Cime. The film documents the ascent of the north face of the Cima Grande, which Christoph Hainz made without ropes or safeguards in just 48 minutes, a feat destined to remain in the history of climbing.
Brenta Base Camp 2014. Vecchie pareti, nuove visioni – Anna Sarcletti, Marco Rauzi (Italy)
150 years after the discovery of the Brenta Dolomites by climbers, Alessandro Beber and Alessandro Baù set up the Brenta Base Camp with the scope of opening new climbing routes on the faces symbolising these mountains. Alongside the two climbers, their friends Simone Banal, Matteo Faletti, Jiri Leskovjan, Fabrizio Dellai, Claudia Mario and Matteo Baù alternate on the rock faces. The small expedition becomes an opportunity for dialogue between the past and the present.
Artists on Jorasses – Bertrand Delapierre (France)
1200 metres tall and 1000 m wide, the Grande Jorasses are legendary peaks for all rock climbers and mountaineers, due both to their spectacular beauty and the possibility of climbing them in all seasons. In autumn 2014 Julien Désécures and Sebastien Bohin decided to take the Desmaison route up to Pointe Margherita in pure alpine style.
Novato – John Herranz (Spain)
Despite his 61 years, Francisco Marin’s nickname is Novato (which in Spanish means newbie), a nickname that seems particularly ironic given that he is the only person of his age still capable of completing ascents graded as 8b+ and 8c. Achieving a similar feat is not simply a question of sport, but also testifies to his constant commitment and total loyalty to his passion.
Secret Kyrgyzstan – Filippo Salvioni (Italy)
An expedition by two young Italian climbers, Luca Schiera and Matteo De Zaiacomo, to one of the most remote and unknown areas of the planet: Kyrgyzstan. A journey in the Ak-Su Valley, allowing the climbers from Lecco to open two new routes and repeat some important routes: a story of pure passion for the mountains, the search for freedom and a fascinating experience of life.

At the age of just 23 David Lama is unanimously believed to be one of the best climbers around. He grew up in the Tyrol, surrounded by mountain scenery, and his vocation for the mountains was so clear and early that he attracted the interest of the great Peter Habeler. In 2010 decided to abandon indoor climbing and concentrate entirely on mountaineering. In 2012, together with Peter Ortner, he definitively freed the Compressor Route from the bolts planted by Cesare Maestri.
(No trailer available)
Stone Free Alastair – Charles Lee (United Kingdom)
Julian Lines is without any doubt one of the greatest free solo climbers currently active, but he has always chosen to remain in the shadows and only share his feats with a restricted number of friends. In addition to his climbing skill, Julian also has an incredible and undisputed ability to fall from prohibitive heights.
(No trailer available)
The Trento Film Festival has been in existence since 1952 and is part of the Alliance for Mountain Film which includes 22 members and 21 festivals that take place in 17 countries across Asia, Europe and the Americas.
These festivals include the Kathmandu International Film Festival, Banff International Film Festival, Kendal Mountain Film Festival, Taos Mountain Film Festival and the Festival Internacional de Cine de Montana.
A founding member of the Trento Film Festival was the Italian Alpine Club, a member federation of the UIAA.
Share: