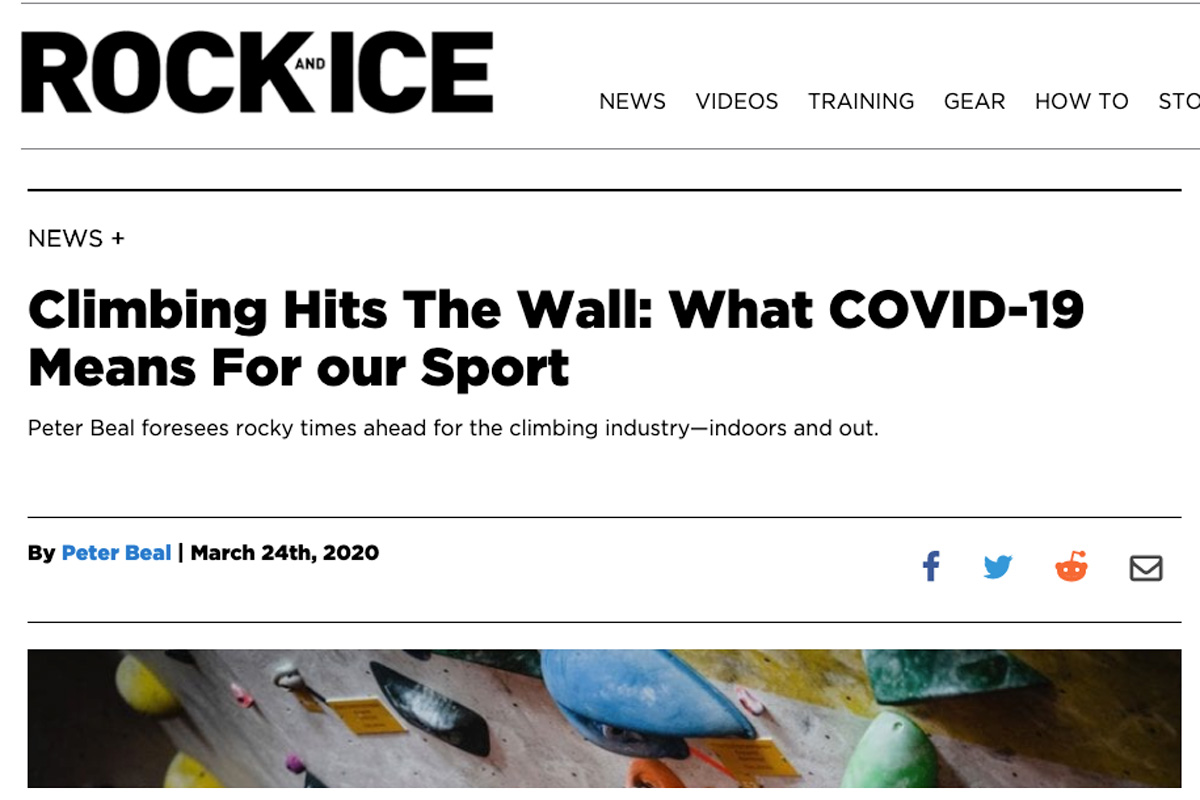 ROCK AND ICE: Climbing Hits The Wall: What COVID-19 Means For our Sport

The following article by Peter Beal was published by Rock & Ice Magazine on 24 March.

The world is reeling from the pandemic Covid-19 and fortunately it’s no longer still being debated whether it’s appropriate to go outside climbing. Ugh. The answer is, right now, definitely not, unless (maybe) you are free soloing, where, in the event of a mishap, you will likely not strain local medical resources. The thought of bouldering has me on edge (hold-sharing with Broseph and his buds, ewww), but pictures of dozens of climbers in close proximity lapping up the Front Range’s crowded cragging scene makes me a little freaked out. Meanwhile, places like Moab, Hueco, Yosemite, Red Rock, and Smith Rock have closed to climbers, but locals are still finding themselves having to plead with would-be visitors to stay away. They aren’t pleading in Europe, since the authorities are simply quarantining EVERYTHING. Will Instagram will develop a conscience about this issue of #vanlife and outdoor recreation in the time of coronavirus? We’ll see.

But speaking of free solo, the bigger picture (see what I did there), setting to one side the extraordinary catastrophe this is handing to the world’s physical and economic health (and hopefully very swiftly setting aside in November the catastrophe’s enabler here in the States), this pandemic came along just as climbing was hitting the big time and will be dealing a very hard blow to that surge in popularity.

This is for a number of reasons:

1. Climbing gyms are closing down and it could be a while.

This really sucks and not just because I work part-time at a gym locally. In Boulder and many other locales climbing gyms are an integral part of the climbing scene. They are the place where beginners often get started and where veterans (myself included) are able to stay on top of new developments. They support strong climbers through employment as setters and coaches. They host competitions and other community-building events. Though there are downsides to gyms, they remain real anchors for local climbers and sources of community and communication.

But their vulnerability to communicable diseases (nobody quite knows how long Covid-19 will stick around) is certainly going to cause both investors and the public to rethink the business model and a few months with minimal revenue (a very likely scenario) is going to wipe out more than a few of them. New gyms (and we were maybe hitting Peak Gym as it was) are going to be facing strong headwinds since the investing climate just tanked.

And of course many members or would-be members may find themselves unable to afford paying gym memberships. And you don’t want to be a hold manufacturer right now. Nossirr. NO. Which sucks because they provide the cool stuff we climb on.

Pro tip: If you can afford it, PLEASE do not freeze or cancel your gym membership. Nobody else will be open anyway and if you don’t support your gym now, it won’t be there when you can come back.

Everybody (well maybe not everybody—thanks a lot, speed climbing) thought the arrival of climbing at the Olympics meant its future was assured. And now the chances of the Olympics happening in Tokyo are slim to none, as numerous news stories are predicting.

In Italy, a person is dying roughly every five minutes. France, Spain and Germany are locked down as is the EU generally speaking. The U.K. just woke up to the seriousness of the situation. We’re next. The Olympics are not happening and that’s a fact. Only a lunatic would convene tens, probably hundreds of thousands of people in a tightly crowded city hot on the heels, let alone in the middle of, a global pandemic. Repeat. OLYMPICS. NOT GOING TO HAPPEN. And worse, climbing is not going to get a second chance at them because…

3. This pandemic is getting scary.

I read things every day that scare me the way watching Free Solo on IMAX never did. Only lunatics enjoy scaring themselves for fun climbing rocks in an already scary world. We used to call such people climbers before sport climbing and gyms made climbing welcoming to more balanced people. Now the world is ultra crazy-real scary and the thought of picking up or even spectating one more risky activity has most of the population reaching for a cozy evening of Netflix and chill.

Normalizing death and dismemberment has long been an Achilles’ heel of this sport especially given the past year or so’s casualty list. Even The North Face “Team” has hired a therapist to deal with managing the trauma that is caused by risking one’s life in the mountains with the goal of “testing” gear that mostly ends up traversing college campuses and pub crawls. Also people won’t have much money, see above.

4. Governments are going to close down public lands for a while, maybe quite a while.

The “dirtbag” #vanlifer roadtrippers are going to be considered as potential disease vectors and invited to quarantine themselves for a couple of weeks in their vans at locations all around the world which won’t be much fun for anyone and a wake-up call to more than a few. The rest of us are going to buy a shit ton of hangboards which will wind up on Craigslist next year as everyone realizes how boring and difficult using a hangboard actually is. Watch one of the 5000 videos that have popped up on Youtube recently and see for yourself. And I love hangboarding! Some of us will build home walls but most of them will suck and, well, see hangboard comments above.

Long story short, soon there will be an abundance of opportunities for climbers to pick up amazing deals on “intro” level shoes, harnesses, ropes (“no falls, only used a few times”) and cheap ATC-style belay devices. Climbing gear manufacturers might be having an excess inventory problem very very soon. (Also people won’t have much money, see above.)

So climbing is in a bad way right now. Big time. Along with a lot of things. If you have any idea how climbing is going to hit the big time now, I would love to hear it. I’ll be at Summer OR (seriously, that probably will not be held this summer) or more likely glued to social media and the news watching as the world burns and hoping to somewhat save my skin and that of my family. The sick sends will have to take a back seat for quite some time.

The original article can be found here.