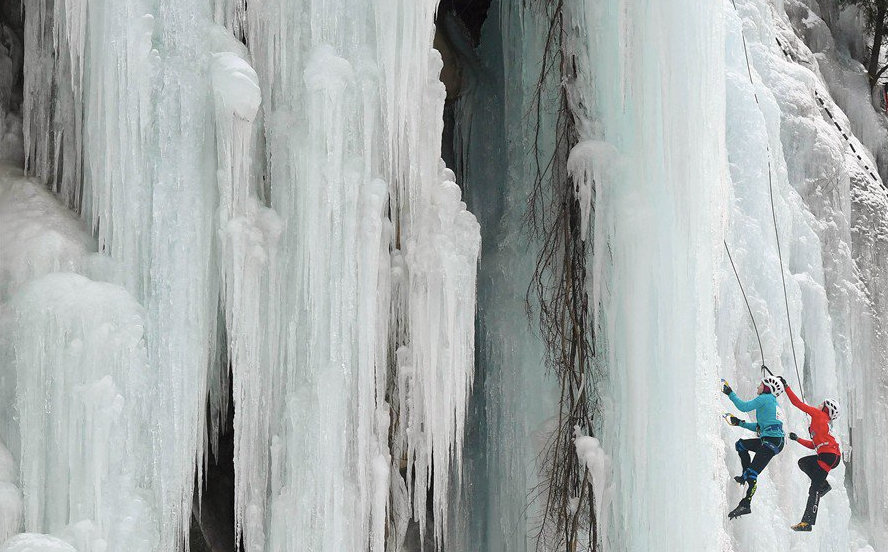 The UIAA Ice Climbing World Tour, partnered by The North Face Korea, heads to Cheongsong, South Korea next weekend for the third event of the season.

Beijing is the new stop on the UIAA Ice Climbing World Tour and its excellent hosting of World Cup events in lead and speed from 7-9 January ensure athletes will be eager to return in the seasons to come.

First class facilities and hospitality were matched by two excellent venues for lead and speed as competition in the 2017 UIAA Ice Climbing season, partnered by The North Face Korea, intensified.

The speed competition, held on a mountainous cascade of ice was first to conclude. 37 male and 14 female athletes prepared to conquer a wall which bought multiple challenges and demanded nimble footwork, raw speed and core strength. The duel format is engaging, fast paced and winner takes all. Athlete against athlete until the field is whittled down.

By the men’s semi-final stage it was down to four Russian athletes. Each semi-final divided into two rounds. In the first duel Radomir Proshchenko saw off compatriot Nikolay Shved by a near five second margin. The second semi-final proved closer. This despite Vladimir Karthashev recording the second fastest time on ice over the weekend. A breathtaking 10.37 seconds on his first attempt. In the second climb rival athlete Nikolai Kuzovlev won comfortably but not by a significant enough margin to overturn the six second deficit he had incurred during a poor first climb.

The final was set. Proshchenko versus Karthashev.  The latter edged the first climb. Barely time to catch their breath and the countdown started for the decisive second ascent. Proshchenko began with intent. Could he become the first athlete to break the 10-second barrier in Beijing? A costly slip halfway up the climb curtailed that ambition but he continued powerfully to defeat his rival by over two seconds and claim the gold medal. In the bronze medal encounter, Shved took the spoils.

The women’s speed final came down to two athletes with rich gold medal heritage. Maria Tolokonina is the defending World Cup champion in both lead and speed. Ekaterina Koshcheeva finished second in speed last year and won gold in Saas Fee. Despite a few stuttering moments, Koshcheeva took the first climb by .26 seconds. The defending champion had to claw her way back. However, on the second climb it was Koshcheeva who exerted her dominance as a tired Tolokonina made a costly slip. A well deserved gold medal. Completing the podium was Nadezhda Gallyamova.

A number of athletes compete in both the speed and lead events. No small feat for the likes of Maria Tolokonina who had given her all in Sunday’s speed competition. After claiming silver in the speed final, Tolokonina showed her class throughout Monday’s lead competition, winning each of the rounds. In the final she completed the climb in a faster time than Korean athletes Shin Woonseon, gold medal winner in Durango, and the ever impressive Song Han Na Rai. Her outpouring of emotion at the end of climb demonstrated how hard she had worked.

The UIAA thanks all of the event organisers and the Chinese Mountaineering Association (CMA) for their hospitality and excellent organization of the event.

Full results from Beijing and season standings can be found on the live UIAA Ice Climbing page.

Images from World Cup event in Beijing will shortly be available on the UIAA Flickr channel.

Video highlights from Beijing, including livestreaming playback can be viewed on the UIAA YouTube channel.

Livestreaming will be provided from the next round of action as Cheongsong, South Korea hosts the third event of the season next weekend.