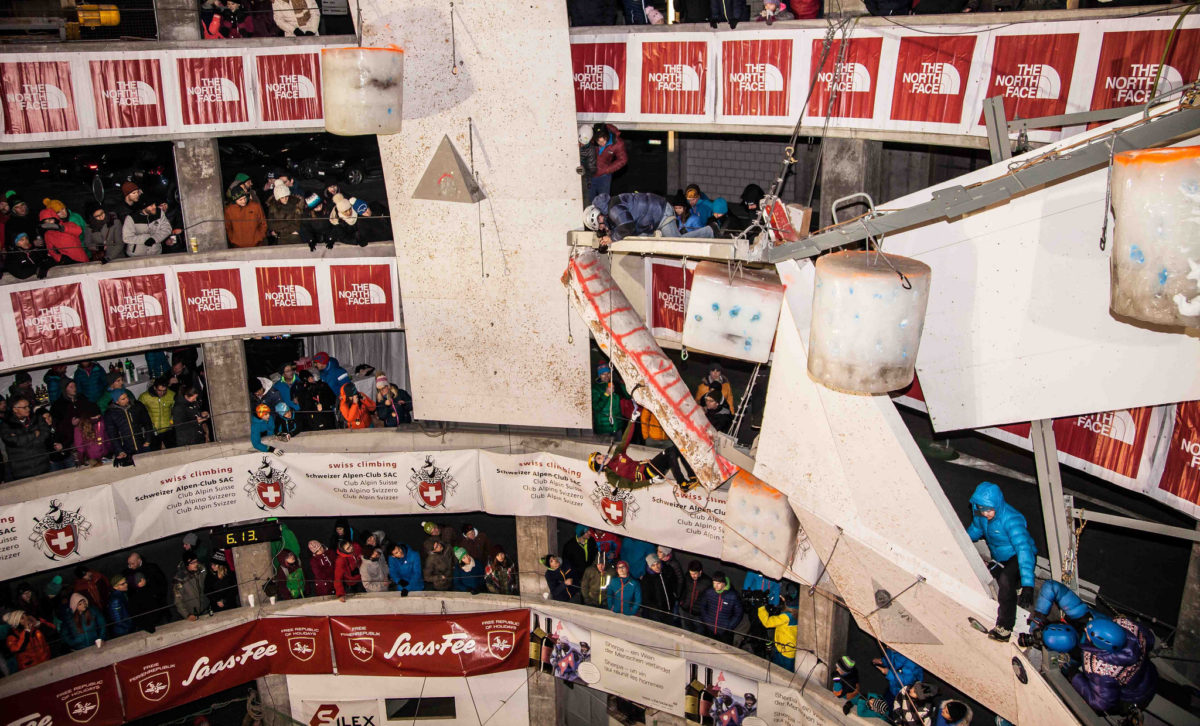 Feats of brilliance on the walls of Saas Fee

A gripping penultimate round of the 2017 UIAA Ice Climbing World Cup, partnered by The North Face Korea, was held in Saas Fee, Switzerland.

In speed, Russia’s Vladimir Kartashev and Ekaterina Koshcheeva were the fastest on ice. All four athletes now lead the overall standings going into the final weekend.

A season record number of international athletes – nearly 150 from 20 countries – and a partisan crowd braved temperatures in the region of -20c for the weekend’s UIAA Ice Climbing World Cup action in Switzerland. Having claimed their first gold medals of the season in their home event in Cheongsong last Sunday, the two athletes maintained an incredible level of performance in defeating spirited competition during a demanding weekend’s ice climbing in Saas Fee’s ice dome. Both athletes extend their lead at the top of the competition leaderboard. Song enjoys a 62- point lead over Italy’s Angelika Rainer; Park heads Nikolai Kuzovlev by 61 points.

Song climbed highest of the female athletes in Saturday’s final, claiming gold ahead of Rainer and Switzerland’s Petra Klingler. The latter’s performance was particularly remarkable. It was her first competitive ice climbing appearance of the season and she dominated the early rounds of competition. Furthermore, she battled on in the Final despite sustaining a painful knee injury which later required medical attention. An incredibly emotional and inspiring performance, her attempt at the finals route is undoubtedly a feat that will be talked about as one of the defining moments of the 2017 season.

Park (below) produced a typically virtuoso performance in the men’s final, finishing ahead of the two Tomilov brothers – Alexey and Maxim – for whom the weekend marked a return to form. Some star names were missing from the finals, the extremely technical and unpredictable nature of the route setting in Saas Fee causing some surprise exits. Most notable were the likes of Yannick Glatthard (SUI) in the men’s competition, Eimir McSwiggan (IRL) and Woonseon Shin (KOR) from the ladies’. Conditions on the speed wall were quite different to the previous rounds in Cheongsong and Beijing. Brittle ice played out for a very technical speed competition, with many athletes falling on at least one attempt (of their three) in the final.

In setting the two fastest times (8.87, 8.95), Vladimir Kartashev was the indisputable winner of the men’s speed competition in Saas Fee. Fellow Russian athletes Leonid Malykh (9.81) and Pavel Batushev (9.87) took silver and bronze. Kartashev extends his lead to 44 points at the top of the World Cup standings ahead of next weekend’s World Cup showdown in Rabenstein, Italy.

The women’s competition was a much closer affair. Climbing in 17.41 on her first attempt Ekaterina Koshcheeva set the standard. It was time which was only truly threatened when competition leader and defending World Cup champion Maria Tolokonina climbed 17.85 on virtually the last attempt of the evening. Close, not close enough. A time of 19.24 allowed Nadezhda Gallyamova to claim bronze. Koshcheeva now leads the season’ standings from Tolokonina by 15 points.

The UIAA extends its thanks to all event organisers – including Der Verein Ice Climbing Saas-Fee and the Swiss Alpine Club (SAC) – for another excellent World Cup event in Saas Fee.

The World Cup season concludes in Rabenstein, Italy on 28-29 January. The biennial World Championships will be held the weekend after in Champagny-en-Vanoise, France. Livestreaming, and video highlights, provided by QTV Sports will be broadcast from both events and available on the UIAA YouTube, Facebook and Twitter channels.

Images from Saas Fee can be viewed and downloaded from the UIAA Flickr channel. Images courtesy of Christian Tscherrig and Peter Bourne. Full results can be found on our dedicated page.

Information about the UIAA and ice climbing can be found here.