UIAA / UIAA  / Giroparchi: Discovery journey of the areas of the Gran Paradiso and Mont Avic parks
In UIAA

Giroparchi: Discovery journey of the areas of the Gran Paradiso and Mont Avic parks GIROPARCHI:
DISCOVERY JOURNEY OF THE AREAS OF THE GRAN PARADISO AND MONT AVIC PARKS

The Giroparchi project aims at creating a new touristic product through the realization of a series of tangible and intangible interventions designed to create a discovery journey of the areas of the Gran Paradiso and Mont Avic parks.

The aim of the project is to improve the naturalistic and cultural tourism potential of the Gran Paradiso and Mont Avic areas, by promoting the integration and development of the economic activities connected to sustainable tourism.

In order to take the visitor through a discovery journey of a territory which is strongly characterised from a naturalistic, historic and cultural point of view, the project involves the creation of a nature trail and runs a number of activities aimed at: improving accessibility and sustainable mobility; creating a system that connects the footpath network with the villages and the places of cultural interest; upgrading the accommodation facilities that can be found on the way; adding value to sites with particular naturalistic and cultural interest; creating information and promotion systems for the general public. 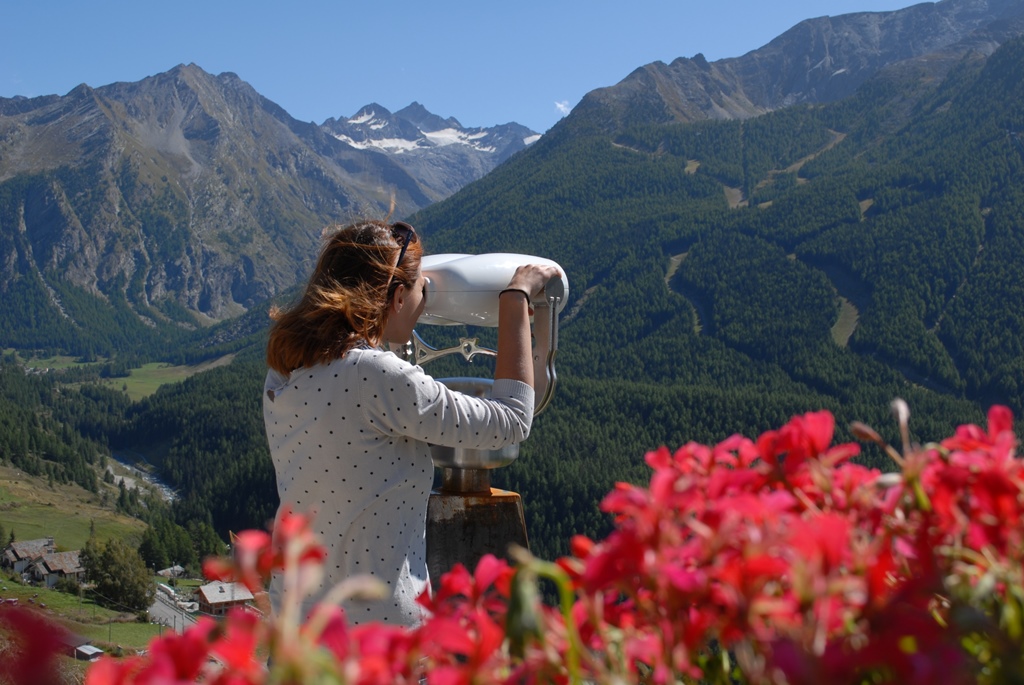 The creation and rehabilitation of the trek network, with the study of 8 circular itineraries (each characterised by a colour) reflect the natural vocation to a sustainable tourism in the area of the Parks. Sustainable tourism, fulfilling a fundamental role in the conservation and enhancement of the environment, represent a crucial factor for the attractiveness and the economic growth of the territory, thus fostering the integration, rationalisation and optimisation of the management and use of the resources. Through the new treks and offers, the rehabilitation of areas in need of interventions and a thorough promotion of the existing offer, there has been a growth in the opportunities for the fruition of the territory for a wider range of users and visitors, the interconnection between the protected areas was enhanced and the accommodation services were implemented in the whole territory.d Haut-Chablais, strictly using only public means of transport and testing the various services accomplished by the partners of the project. The collected material was used by the participants to create a video-story of this experience, and was subsequently shared through different channels such as the Gran Paradiso Film Festival, the project website, Youtube and social channels of Fondation Grand Paradis, and by participating in the “European Cooperation Day video contest”.

Giroparchi represents a unique way to live the territory of Gran Paradiso National Park and Mont Avic Natural Park: 300 kilometres of nature treks in the Aosta Valley protected areas. The tourist has the chance to live a 360-degree experience thanks to the Giroparchi Hiking Map, the new map to navigate the network of nature trails through the Gran Paradiso National Park and the Mont Avic natural Park. It shows the eight circular walks to be found in the five protected valleys, as well as the description of the itineraries and all information to prepare one’s day out of doors. A useful tool to discover the protected nature of Aosta Valley.

Besides, in the two territories where conducted material and immaterial rehabilitation actions related to nature and landscape, like the creation of a nature-trek around the Les fontaines pond or the setting up of Champdepraz museum, or interventions of enhancement of accessibility, like the environmental rehabilitation of some rest areas or the creation of pedestrian paths linking the different facilities of the two parks.

Giroparchi Nature Trail is a hiking tour in the Parks of Aosta Valley, targeted for local youths and aimed at increasing their knowledge of the protected areas as well as of the English language.

The initiative, launched in 2013, is designed for teenagers aged between 11 and 14: the aim is to introduce them to the importance of the biodiversity of Italy’s oldest National Park, Gran Paradiso, while teaching them the vocabulary and expressions to share it in English. The trek is guided by three professionals, all of them native English speakers: a nature guide, an English teacher and a teaching assistant. A range of games are proposed en route, to allow the kids to acquire linguistic competencies with an interactive learning method. 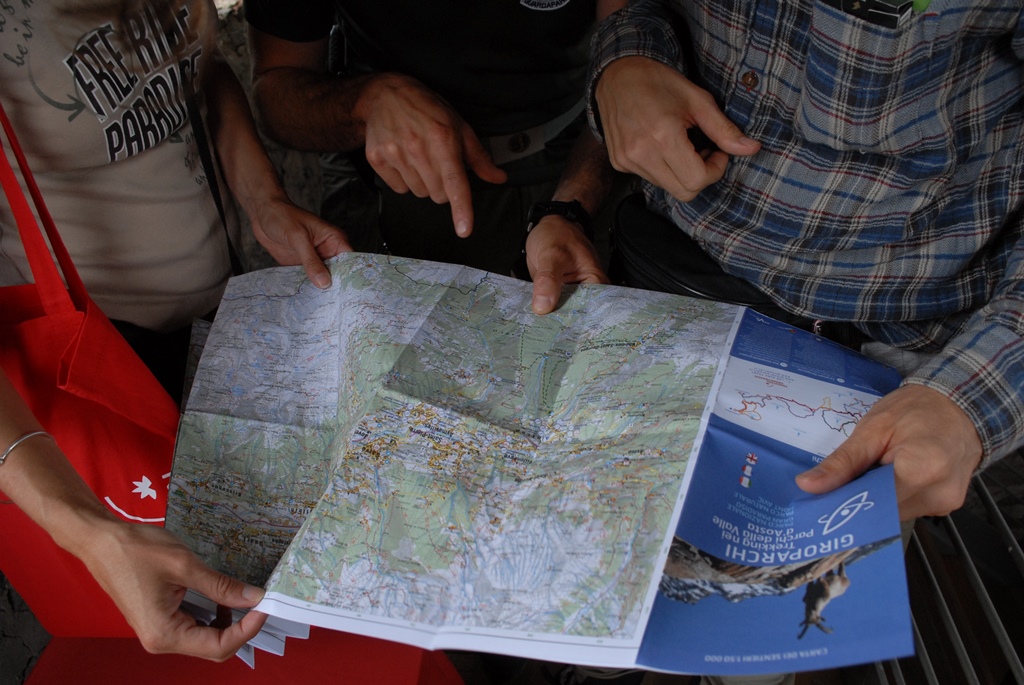 The project has a regional structure in charge, represented by the Servizio Aree Protette (Service for Protected Areas) of the Department of Agriculture and Natural Resources, and two implementing bodies: Fondation Grand Paradis and Mont Avic Natural Park.

– Fondation Grand Paradis coordinates the project, carries out common actions and manages the interventions related to the Gran Paradis territory. In order to help the Foundation carrying out the interventions within its scope, the following co-implementing bodies have been identified:

▪ Trail Management Service of the Autonomous Region of Aosta Valley.

▪Trail Management Service of the Autonomous Region of Aosta Valley.

GOING BEYOND BUSINESS AS USUAL

Giroparchi stems from the idea of requalifying and propose to hiking tourism the trail network created by Victor Emmanuel II for his royal hunts, that already linked Gran Paradiso and Mont Avic, through the creation of circular itineraries that allow the use for many days. The fundamental idea is that the Giroparchi territory is unique and unite, not only from the historic point of view, also from the ecologic one – two protected area linked beyond the administrative borders that create an ecologic aisle – and the orographic one, due to the similitudes of the southern valleys of Aosta Valley.

Among the additional services there is the TrekBus Giroparchi, launched in 2011, an extra service for hikers who can find a big solution to broaden their inter-valley opportunities. It is an experimental and pilot transport service that connects the Councils of the Gran Paradiso area at the bottom of the valleys (Aymavilles, Villeneuve, Introd and Arvier) to those located in the middle and

top sections of the valleys (Cogne, Valsavarenche, Rhêmes-Saint-Georges, Rhêmes-Notre-Dame and Valgrisenche). The experimentation had a remarkable echo, that the Aosta Valley autonomous Region replied the service in other tourist areas (Valtournenche and Val d’Ayas) and still activates it nowadays, in 2017.

In the framework of the project was also created WebGis, a system that elaborates treks for walks or bicycling in the territories of the Gran Paradiso National Park and Mont Avic natural Park. Thanks to the software Open Street Map, it proposes 544 km of itineraries in the municipalities of Cogne, Valsavarenche, Rhêmes-Notre-Dame Aymavilles, Champdepraz, Champorcher, Rhêmes-Saint-Georges, Introd and Villeneuve. The WebGis Giroparchi, realised through the software WebGIS GeoRouter, draws from the data of the Regional cadastre of trails, database created by the Trail Service of the Aosta Valley Autonomous Region. On the interactive map, selecting a starting point, a finishing point and some intermediate points, the system provides the description of the itinerary, the distance length and time and it creates a map in the requested scale, including the attractions. It is then possible to print the map and the roadbook and to download the GPS tracks.

PROJECT MANAGEMENT OF THE ACTIVITY

The preliminary phase of the project involved Fondation Grand Paradis in the survey and sharing of the needs of the seven local administrations where it operates, tuning the interventions in order to make them congruent to the basic idea of the project and sharing the points with the Aosta Valley Autonomous Region, Communities of the Park, the Gran Paradiso National Park, the Mont Avic Natural Park, the municipalities and mountain communities. Fondation was the implementing body for the interventions under the direction of the Service for Protected Areas of the Department of Agriculture and Natural Resources and for the specific interventions on the Espace Grand Paradis area. Furthermore, Fondation took care and was responsible for the whole communication and promotion aspects of the project.

The project aims at enhancing the natural and cultural peculiarities of the Aosta Valley side of Gran Paradiso through the rehabilitation of the old royal network of trails and mule paths, once used by King Victor Emmanuel II. This requalification brought to the creation of a network of treks and itineraries suitable for everyone, from families with children to skilled hikers, thanks to which they have the chance to discover and explore Italy’s oldest national park. Thus the project managed to give value in a responsible way a public heritage with an inestimable value from the ecologic, nature, historic and panoramic points of view, offering to everyone a tool that stemmed from the merging of the interests of all the stakeholders of the territory. Regional and local governmental administrations, the Park and the tourism actors contributed in different ways in the various work phases, cooperating for the final outcome. Giroparchi is a huge and ambitious project that created a tourist path for the integrated use of the territory guaranteeing a responsible and ethic management of the natural and cultural resources of Gran Paradiso.