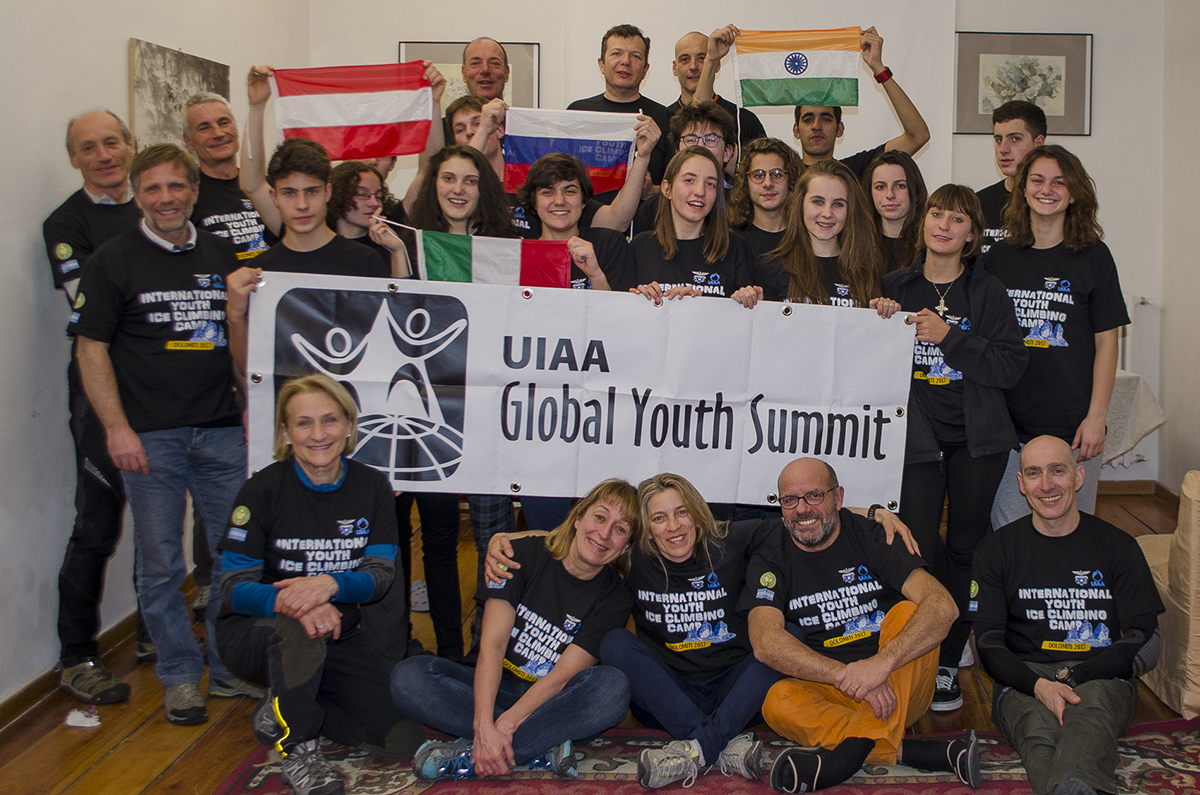 The second Ice Climbing Camp for the 2017 UIAA Global Youth Summit took place in the Dolomites from 9-13 February, 2017. The logistic base of the event was the Sasso di Stria Hotel, Piani di Falzarego, minutes below the pass of the same name. There were 15 participants: four foreigners from Slovenia, Austria and India, and 11 Italians. The group was supervised by the following Youth Leaders: Rosella Chinellato, UIAA Youth Commission Representative, Franco Api, Michele Manna. The technical activities were directed and coordinated by the National Instructor of Alpinism Francesco Cappellari with the support of other nine National Instructors of Alpinism from CNSASA School. Friday 10 February: Climbing day on the Sass Dlacia Ice Falls situated in the Armentarola area. Four groups were formed to perform different activities in order to learn climbing techniques, the basic movements, the hooking up and abseiling stops. In the afternoon moulinette climbing on different ascent routes. This first day was useful to value the ability level of the individual participants. After dinner, evening class on the ice falls formation and on the ice typologies.

Saturday 11 February: According to the different ability levels valued the previous day, two groups were formed. The four participants that had already climbed on ice falls went to the Sottoguda falls with three Instructors and one Youth Leader: here they climbed a fall with single pitch and one easy fall with multiple pitch and relative abseiling. The other participants went back to the Sass Dlacia falls to practice on easier routes with the aim to improve the movements and acquire more confidence with them. In the evening, after dinner, theoretical class about safety rules. Some ice climbing videos were shown.

Sunday 12 February: After seeing the improvements of the second group, the participants went all together to the Sottoguda falls. The less expert guys climbed on single pitches routes, while the rest of the group climbed on multiple pitches routes ice falls: “Palestrina della Traversata”, “Escalibur”, “Cattedrale”. In the evening the farewell party took place: the books “Ghiaccio Verticale” by Francesco Cappellari and “Dolomiti Unesco World Heritage” were given to the leaders and the participants. Monday 13 February: After breakfast the group went to Cortina d’Ampezzo where we visited the Paleontological Museum Zardini and the Ethnographic museum. At 11.30 a.m. the group left for Conegliano train station where the participants left. Considerations: our second UIAA Ice Climbing event was a great experience. The participants have faced a different and more difficult climbing environment and reacted with willingness and great enthusiasm. In the end both the participants and the instructors were satisfied with the progress achieved.