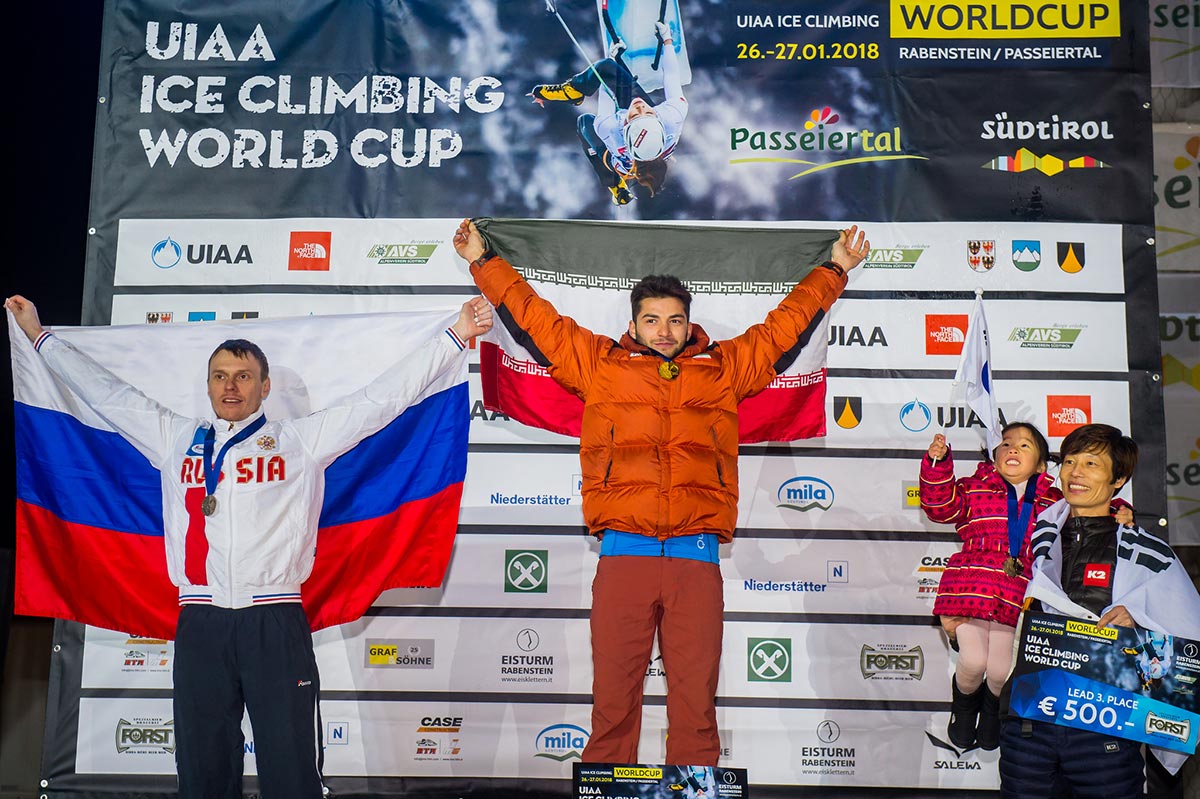 In Featured, Ice Climbing, UIAA, Under the Ice

The most recent UIAA Ice Climbing World Tour featured athletes from 29 different countries. Teams varied from the 52-strong Russian presence to countries such as Ireland, India and Bulgaria represented by single athletes. While the overall World Cup winners of the speed and lead disciplines hailed from Russia and the second most represented team in South Korea, competition ice climbing continues to develop its foundations in a number of countries.

To cite a few: France, which has seen the recent emergence of the Ladevant brothers, is an incredibly consistent team with athletes regularly reaching the final rounds; likewise Switzerland which continues to develop youth climbers of incredible promise and the Chinese and Mongolian teams which are sending athletes in greater numbers to events. Perhaps though the most prominent rise has come from Iran. Over the past two years the Iran Mountaineering & Sport Climbing Federation, a UIAA member, has bolstered its support for ice climbing. One of its more significant commitments is organising dedicated training camps in collaboration with the Russian Mountaineering Federation in Kirov. Here athletes are able to train on one of the world’s most challenging competition speed walls, an opportunity very few athletes manage outside of World Cup events.

During the 2018 UIAA Ice Climbing World Tour, Iran – the third largest team in terms of athletes sent to World Cups – celebrated three firsts. At the season opener, Mohammadreza Safdarian became the country’s first World Cup medallist collecting a lead bronze in Saas-Fee, Switzerland. A week later in Rabenstein, Italy he collected a historic gold medal. At the end of the season, Safdarian, a firefighter by day, became the first Iranian to finish in the top three in the overall season standings. Progress is not simply quantified by medals. Rad Beheshti Mohsen has made enormous progress in the speed discipline. He finished the season seventh overall as the best non-Russian athlete. Only once did he not make the final eight at a World Cup. Zebinabkobra Moosavi may have earned a similar place in the women’s competition had she been able to complete all five World Cups. She was a regular top ten performer in lead and speed. What is especially noteworthy about Iran’s top athletes is their ability to compete in both disciplines, something which will serve them well as combined format ice climbing becomes more popular. Safdarian himself enjoyed two top five finishes in speed during the most recent season.

“We train exceptionally hard,” explains Masoud Zeynali, one of the first athletes to emerge from Iran and whose own best performance in 2018 was a 14th lead finish at the Cheongsong World Cup. “The camps in Russia have had an enormous influence on our performances and ability to train better on real ice. In Kirov the great Russian athlete Alexey Vagin has been a real support.”

The team also train together regularly in the gym and on a lead structure in Tehran. “When I first joined the World Tour in 2012, there was very little knowledge or expertise in Iran about the sport. I had no coach so learnt a lot from scratch,” explains Zeynali, a kind of pioneer for the competition ice climbers in his own country. “After my first World Cup, I helped introduce a different approach to training for competitions.”

“For us ice climbing is about more than competition,” adds Zeynali who is also qualified as an international route-setter and coach. “It represents a diverse range of values from being in nature and appreciating it, friendship, freedom, culture, integrity, safety and a love for the sport.”

Zeynali closes with one bold prediction: “In the coming years, after the great success of my friend Mohammadreza Safdarian in the lead discipline we will witness a World Cup medal in speed for our male and female athletes.”

The 2018-2019 UIAA Ice Climbing World Tour, the biggest yet, opens in November 2018 with a European Cup in Bern, Switzerland. More details on all events will be available shortly.