“Ever since I joined the Trust I have gained experience on conservation and am more informed on climate change and adaptation, animal safety and rescue data collection and activities happening in the forest reserve. My team are like my second family.”
Martin, HPT rider.

The overarching goal of the Horse Patrol Team of the Mount Kenya Trust (HPT) is to enhance the capacity of law enforcement personnel within Mount Kenya National Park and Reserve that in turn will decrease the level of poaching and other illegal activities mainly but not limited to the high altitude areas of the northern section of Mount Kenya’s UNESCO protected ecosystem. Along with law enforcement, the short-term objectives are: 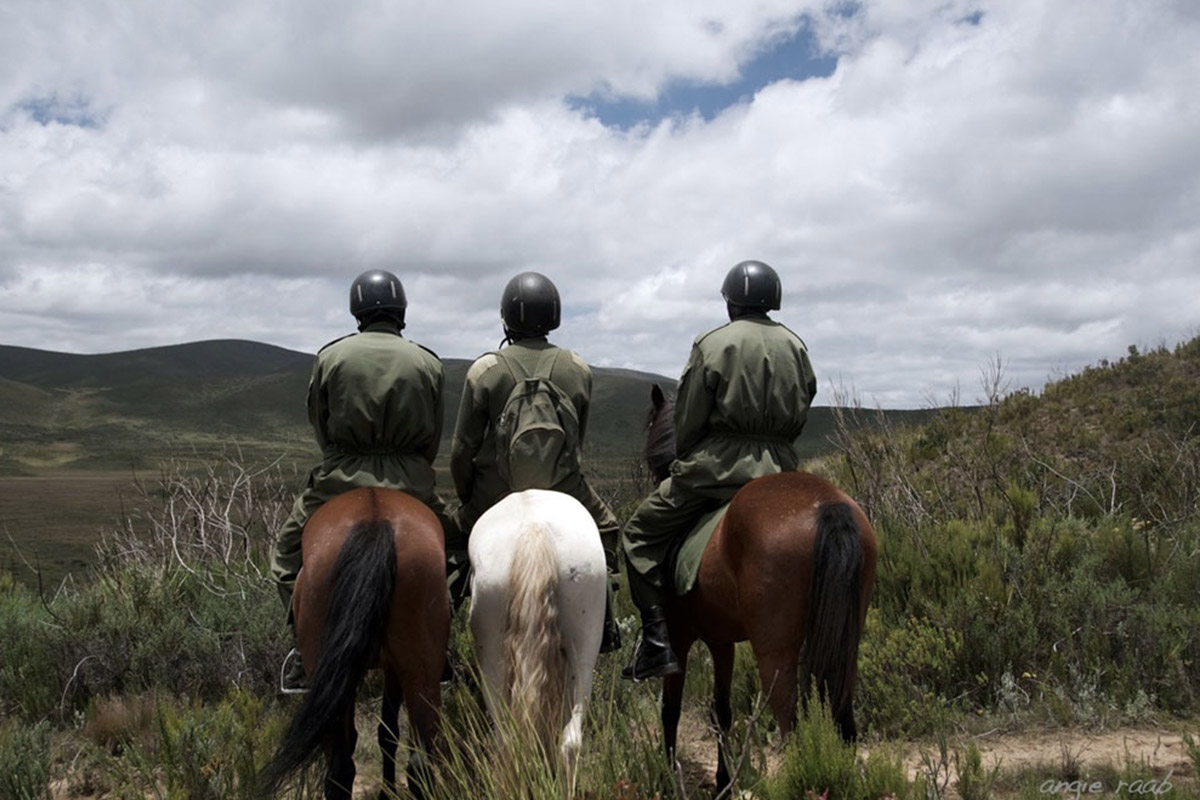 The “afromontane” forests, vast bamboo stands and moorlands host incredible biodiversity including numerous species of IUCN concern, such as African Elephant and Mountain Bongo, along with 81 endemic plant species. The forest is the largest contiguous forest remaining in Kenya and an UNESCO World Heritage Site described in 1999 as ‘one of the most impressive landscapes of Eastern Africa, with its rugged glacier clad summits, Afro-Alpine Moorlands and diverse forests, which illustrate outstanding ecological processes.’

Preservation is critical not only for wildlife but for the millions of Kenyans who depend on water from the Tana (Kenya’s longest and largest river) and Ewaso Ng’iro river basins – also feeding a series of hydroelectric dams that provide over 65% of Kenya’s hydropower. The importance of the mountain to Kenya’s water provision and ecological stability cannot be understated.

The Trust employ local community men employed who make up the HPT based at Kisima Farm, Timau. The men work with 10 Ethiopian horses who were all donated to the Trust. They go back home to their communities and discuss their work. Activities of the HPT include among others:

Clearing of snares: Community members, typically very poor, are allowed to farm within the Reserve boundaries for several years under the condition they nurture tree seedlings alongside the crops. However, often with access into the Reserve, these individuals participate in illegal activities such as snaring and poaching.

Training workshop at the HPT base, exchange of information and raising awareness among local communities.

The Trust runs many programmes in partnership with the local communities. Our tree planting projects are run in collaboration with KFS livelihood improvement schemes. These bring welfare benefits to the local community through the Plantation Establishment Livelihood Improvement Scheme (PELIS). Community farmers adjacent to the Reserve edge are given permission to cultivate agricultural crops during early stages of forest plantation establishment (3-4 years). This project allows reforestation of degraded area whilst at the same time providing an income to poor community members.

The team is the only community horse patrol team in Kenya, patrolling daily within the northern region of Mount Kenya Reserve. The team apprehend and arrest poachers and seek to prevent illegal activities. Accompanied by KWS rangers, the team are unarmed and operate under a no-violence policy. Suspects are arrested and sent to the local police station for sentencing. The team are supported by a northern sector vehicle that it on hand for emergency situations or for rapid movement. They are also supported by a Northern Sector supervisor who is a ex-policeman. He knows the procedures and systems that need to be followed. Satellite camps are the newest project for the team. Although we have seen a huge decrease over the years in illegal activity within HPT general patrol area, poaching and illegal activity continues further afield in other parts of the Reserve. Mobile camps are the next structural developments required so that the team would not have to return to the base every night. This would enable the team to patrol much further afield and cover more ground during the daytime. 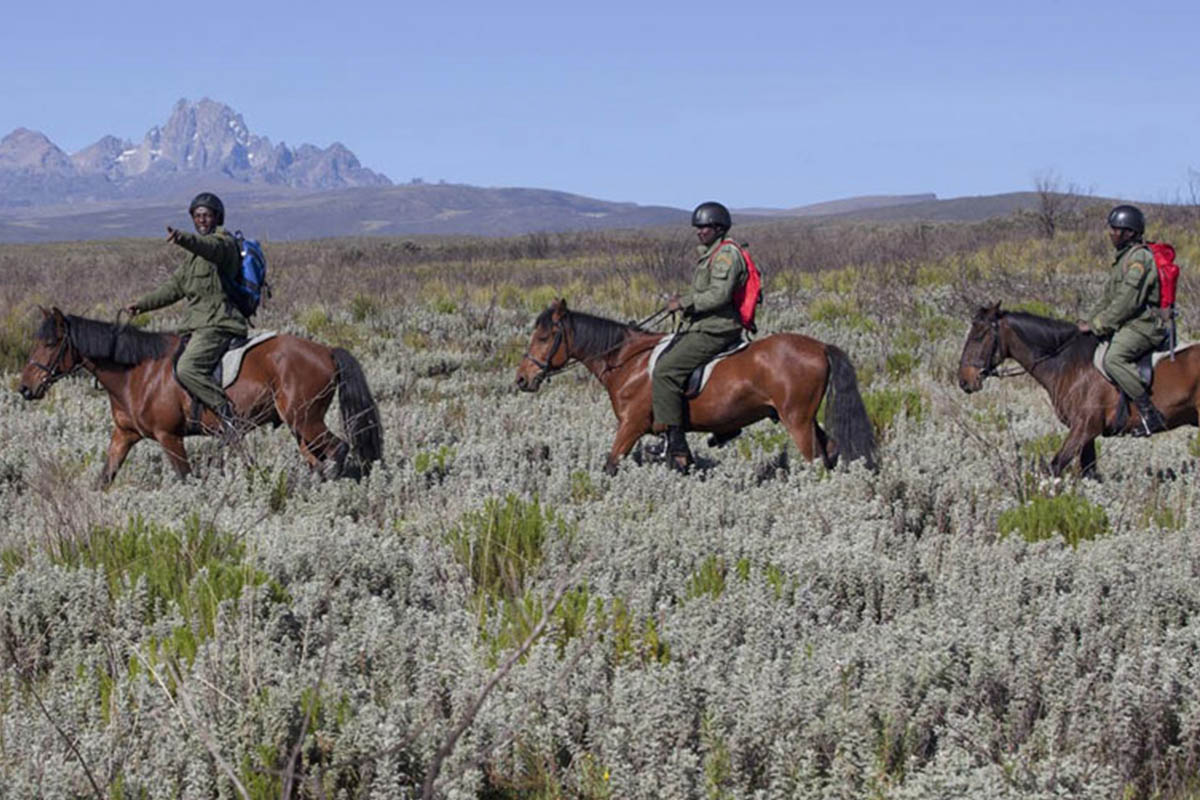 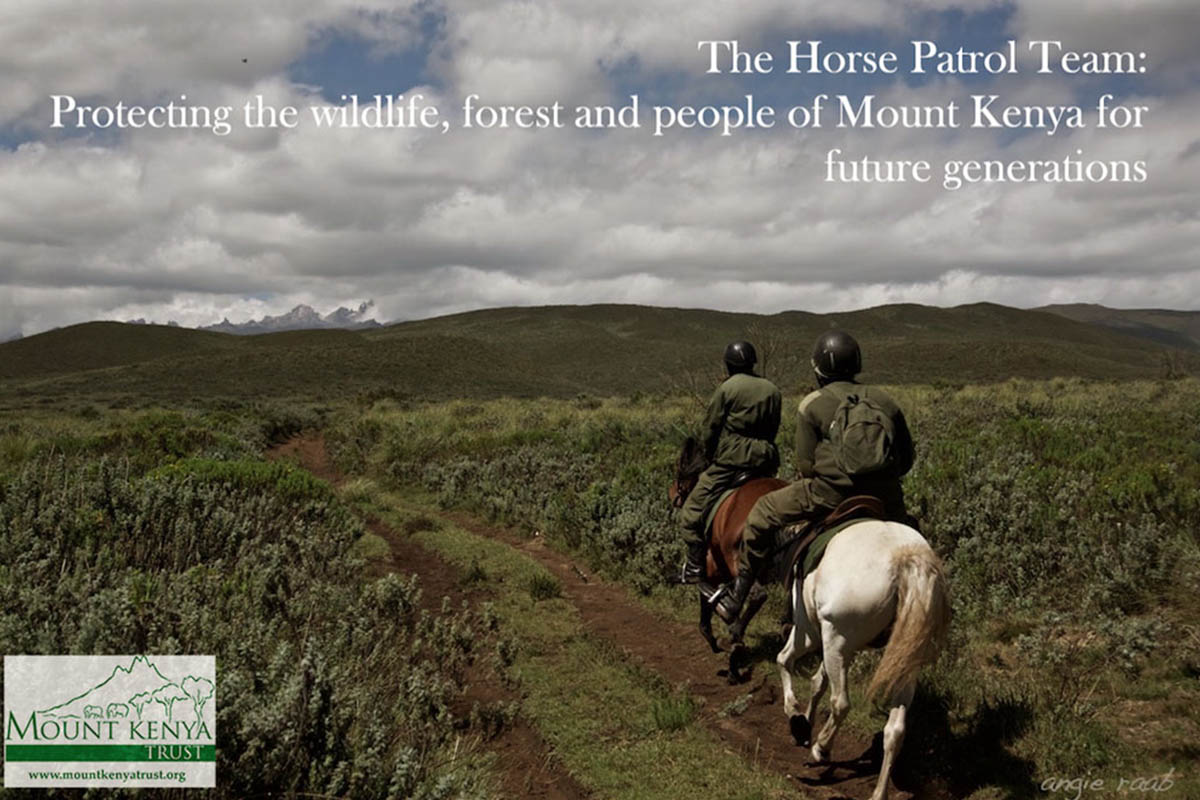 We always encourage visitors to come and visit. Every month we have visitors who come up to visit the HPT and go out for a ride into the forest and moorlands. We also have lots of interest from international film crews who come to photograph and film the team. The most recent was a group called ‘Boots on the Ground’ who are travelling the African continent raising awareness of the plight of wildlife and the brave rangers who work tirelessly to protect them. The team is also often called upon to help out a local events. Having visitors up to the HPT is something we would like to expand upon. One idea was to have several weekends a year where visitors ride out to a satellite camp, stay the night and then ride back – paying a donation to the team and also having access and an experience that would not usually be accessible. This could also be combined with a hiking group – along with support vehicle.