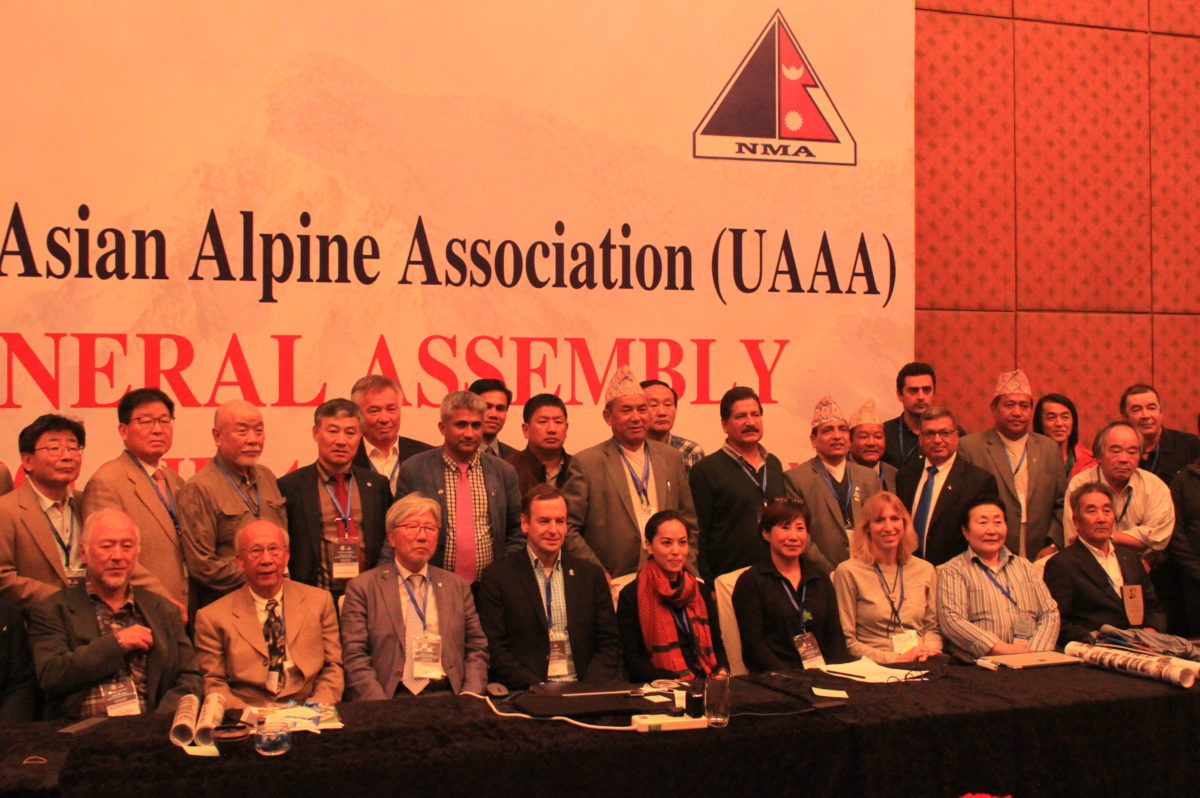 Kathmandu and the Nepal Mountaineering Association (NMA) played host to a weeklong array of international mountaineering events in mid-November.

Commencing proceedings was the General Assembly of the UAAA, the Union of Asian Alpine Associations, held from 18 November with representatives from sixteen different Asian federations in attendance.

Featuring among the talking points were the recent Asian Piolet d’Or Awards, the environment, youth participation and expeditions. In parallel, the NMA hosted a two-day conference on mountain tourism and climate change in Nepal. Following 2015’s devastating 7.8-magnitude grade earthquake, which killed 9,000 people, injured 22,000 and displaced well over half a million families, the complex reconstruction progress is well under way.

The conference drew together tourism and environment experts from various fields, with a significant focus placed on Nepal’s continued recovery from its worst natural disaster in over eight decades. Other discussions covered the impact of climate change on tourism, the changing tourism scene in Nepal and the Himalayas and strategies for creating resilient livelihoods.

The final part of the conference focused specifically on the mountaineering world. UIAA President Frits Vrijlandt presented ‘The challenges of Safety in mountaineering’, highlighting the UIAA’s commitment to training qualifications , the importance of the UIAA Safety Label, and notably recent developments in China, and the UIAA’s work in mountain medicine.

Dr Lee In-Jeung, President of the UAAA, highlighted the importance of the International Mountain Museum in Pokhara, Nepal, not only to Nepalese people but to all international visitors to the country and called on members of all 18 UAAA federations from 14 countries to support new initiatives aimed at developing the museum. Closing the conference was NMA President and fellow UIAA Honorary Member Ang Tshering Sherpa. He explained: “Tourism is one of the top three industries in Nepal. It provides employment, revenue and is key to developing the remote rural areas. In a country where a significant segment of the population is living under the poverty line, development is the prime need of the country. In this regard tourism is the lifeline of many Nepalese, especially those living in far-flung places that have little economic opportunities.”

Ang Tshering Sherpa continued: “The Himalayas are the most vulnerable to climate change and global climate change is having a disproportionate effect on Nepal.  Climate change is clearly visible in high Himalayan regions, where the rise in temperature is more than double the global average temperature rise. White snow peaks and Himalayan glaciers are melting rapidly and retreating at an unprecedented rate, leaving in their place the highest and most unstable glacial lakes in the world. Due to the rise in temperature, local crops are being destroyed by the introduction of new bacteria. While at the same time the changes to the mountain wildlife habitat, ecology, and vulnerability of new diseases, is leading to the extinction of various indigenous flora and fauna.” He then closed by highlighting the efforts made to rebuild mountain communities following the April 2015 earthquake. During the earthquake, 18 climbers died on Mount Everest and another 71 were injured. In the aftermath of the disaster, the NMA has worked with the United Nations World Food Programme to rebuild infrastructures notably trails, roads, bridges and access to remote villages allowing mountain communities to resume their lives and, in parallel, tourism activities to return in a safe manner. “Tourism supports the livelihood of many rural Nepalese and directly improves their abilities to cope with climate change,” added Ang Tshering Sherpa.

Festivities continue in the coming days with the Diamond Jubilee Celebrations for Mt Makalu and Mt Kanchenjunga. These were originally scheduled for 2015 but postponed due to the recovery efforts following the last year’s earthquake.